Bus stoppage: Why Google and Apple were targeted 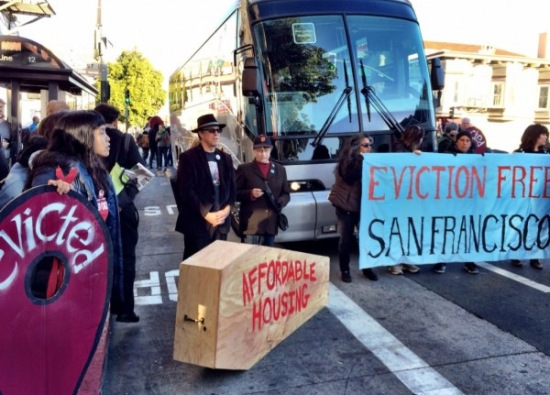 It’s not every day that the New York Times cares enough about California real estate to cover a landlord-tenant dispute in San Francisco. But this story had it all — violence, vandalism, two high-profile tech companies and a whiff of class warfare.

The action that created the headlines — not just in New York City, but in Los Angeles, at USA Today, and all over the Internet — were three rush-hour protests Friday in Oakland and San Francisco.

The ostensible targets were high-tech workers being conveyed to Silicon Valley in company-owned temperature-controlled, Wi-Fi-enabled buses — one for Apple (AAPL), two for Google (GOOG).

The Apple protest was organized by activists who have been stirring things up in San Francisco since last April, when a landlord in the Mission District changed the locks on a building at 17th and Mission known as “17 Reasons Why” that housed several grassroots organizations, including a self-described “anti-authoritarian and anti-capitalist, anti-art and events collective” called The Works.

A series of peaceful protests ensued, starting with an anti-gentrification block party in May (with Google bus piñata) and culminating in Friday’s genteel half-hour blockade of a bus bound for Cupertino.

Things were not so peaceful in West Oakland. There, according to an eyewitness account — and images captured via Google Glass — a protestor boarded the bus and harassed the riders while outside a banner reading “F…  Off Google” was unfurled and the street was littered with “Disrupt Google” fliers. Then someone broke one of the bus windows.

“In case you are wondering why this is happening,” read an unsigned manifesto, “we’ll be extremely clear. ‘The people outside your Google bus serve you coffee, watch your kids, have sex with you for money, make you food, and are being driven out of their neighborhoods…. You are not innocent victims. Without you, housing prices would not be rising, and we would not be facing eviction and foreclosure.”

Truth is, the Bay Area is getting squeezed from all sides. Not only is it home to one the world’s highest concentrations of billionaires, but San Francisco has one of the largest homeless populations in the U.S. Wedged between the Pacific Ocean and San Francisco Bay, the city — like the island of Manhattan — has nowhere to go but up to expand its housing stock. Much of its usable land area, however, is covered with rows of Victorian houses — many located within the city’s 11 designated landmark districts — that are part of San Francisco’s charm.

Pressure from tech workers who would prefer to live in San Francisco than suburban Silicon Valley have pushed the average monthly rent for apartments in large San Francisco complexes to $3,096, up nearly 12% in a year according to RealFacts. Meanwhile, evictions are at a 12-year high as landlords use a provision in California law called the Ellis Act to bypass the city’s rent control protections.

As targets for public protests, the Ellis Act and those tough Bay Area landlords are not likely to make the evening news. Not like bus loads of Google and Apple guys — no matter how sympathetic as individuals they might be to the demonstrators’ cause.

“This protest targeted the wrong company,” wrote one commenter on indybay.org’s account of the Gbus incident. “Google is bringing money TO the Bay Area; fighting Google isn’t going to fix poverty. And unlike many big companies, Google tends to spread the wealth around to its thousands of employees, who all end up spending more — yes, on rent as well, but also on goods and services.”