Is the Salvation Army wiping out its anti-gay rhetoric? 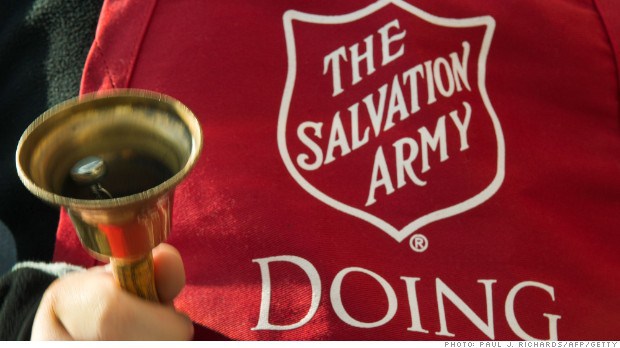 It’s a story right out of the Bible; an ordinary citizen takes on a Goliath.

If you use Facebook (FB) or Twitter (TWTR), you may have read one of many recently shared posts or tweets that claim the Salvation Army, the Alexandria Va.-based global Methodist ministry and social welfare provider, is unapologetically anti-LGBT.

Yesterday, a Methodist minster in Pennsylvania was defrocked for presiding over his son’s same-sex marriage. But the Salvation Army, whose teachings are rooted in Methodism, isn’t just a church. If it were eligible for the Fortune 1000, it would be ranked at No. 578. Its network of thrift shops, corporate and government funding, and alms-collecting volunteers form a $4 billion not-for-profit business that employs more than 64,000 people and provides social services to more than 30 million homeless and poor each year — making it the second-largest charity in the U.S. after the United Way. Or, if you will, a Goliath with two heads: church and charity.

Lauren McNamara, a 24-year old writer for a marketing firm in Orlando, created a Facebook page in 2009 called Boycott The Salvation Army. Then last month, she launched NoRedKettles.com with a friend. The site compiles many isolated incidents that have given the Salvation Army so much grief from the gay community for the past 20 years: the closure of homeless outreach programs in San Francisco in 1998 in retaliation for a city requirement to provide benefits to same-sex partners; a similar threat in New York City in 2004; and a failed attempt in 2001 to lobby the Bush administration to exempt religious charities from local laws banning discrimination. But the most egregious moment came this past June when a spokesperson for the Salvation Army in Australia went on the radio to suggest that gays deserve to be put to death.

On Dec. 11, the Huffington Post re-published a screed from McNamara’s site, using her online pseudonym Zinnia Jones. Others have joined the grassroots campaign to make the public aware of the Salvation Army’s history of anti-gay bias, and earlier this week the New York Times published an op-ed essay by a transgender woman explaining why she no longer volunteers to be a bell ringer.

The Salvation Army denies any such discrimination. In an interview with Fortune, Major Ron Busroe, the Salvation Army’s community relations and development secretary said “all of these allegations are false. The Salvation Army does not condone discrimination of any kind,” and referred to the U.S. organization’s statement made at the time of the incident in Australia, which reads, “There is no scriptural support for demeaning or mistreating anyone for any reason including his or her sexual orientation.” While that may be the official line, Busroe and McNamara are conversing — a sign that the dialogue for change continues.

The charity contends that it abides by all local anti-discrimination laws and has a very broad policy that condemns all types of discrimination. It maintains that it currently offers health and wellness benefits to the same-sex partners of employees. (It has also returned to performing outreach work in San Francisco.) However, nowhere within its written policy does it include protections for or mentions of gender or sexual orientation. And, unlike most for-profit Fortune 500 companies, the Salvation Army does not fire its employees — from either the ecclesiastical or outreach programs — if they happen to discriminate. “As an organization, we don’t do that,” Busroe explained. Such offenders are removed from their position and placed elsewhere within the organization.

Since the social media onslaught, the organization has made great efforts to control the damage to its image, going so far as to create a web page devoted to “Debunking the Myth of LGBT Discrimination,” as well as producing video accounts of LGBT people who speak in support of the church. In November, after receiving a complaint from the gay advocacy group Truth Wins Out, the Salvation Army removed two ex-gay therapy groups from its online list of resources for people seeking help for sexual addiction. A Salvation Army spokesperson revealed that some of its ordained ministers, who they call “officers,” also happen to be gay and lesbian.

When I first read the story about the Salvation Army’s alleged anti-gay policies, I reposted it to my own Facebook page. How could a charity that does so much good for so many millions of people and has received countless handfuls of my own pocket change over the years, also profane an entire global community?

For all of the changes that seem to be occurring, however small and slow, the Salvation Army still doesn’t permit its clergy to conduct same-sex marriages. According to a spokesperson, “as a Christian church, the Salvation Army holds theological beliefs that direct the actions of our officers and church members. Our beliefs are based on our interpretation of the Bible. As a result, our officers officiate traditional marriage ceremonies between men and women who are in committed relationships.”