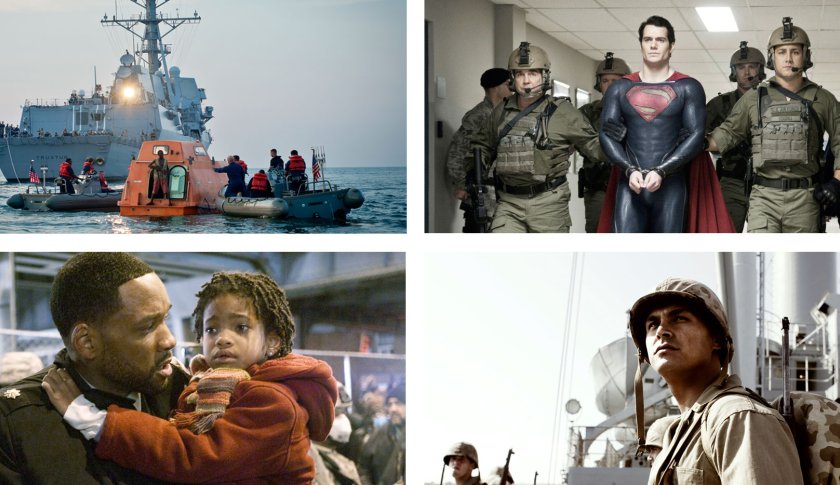 In 2009, Somali pirates hijacked the cargo ship Maersk Alabama and took its captain, Richard Phillips, hostage in a lifeboat. Within days, the U.S. military stormed in, equipped with a guided missile destroyer, a Wasp amphibious assault ship, an Oliver Hazard Perry-class frigate, several helicopters and members of Seal Team Six. In the movie, Tom Hanks plays Captain Phillips, while a similar missile destroyer, the Wasp, the helicopters, and the Seals play themselves (though they are not on active duty) — courtesy of the U.S. Navy.

Even in an age of special effects, it’s exponentially cheaper to film on actual military ships with real military advisers. Despite action sequences and an A-list lead, Captain Phillips cost about $55 million to make (compared with a visual effects fest like Gravity, which cost about $100 million). The fulcrum of Hollywood’s unlikely partnership is Phil Strub, a former film school student and Navy videographer, now the entertainment liaison at the Department of Defense.

Scripts of movies helmed by Michael Bay, Ridley Scott, and Steven Spielberg are regularly sent to an ascetic office at the Pentagon in hopes of procuring military cooperation. If he signs off, the filmmakers stand to access the most awesome arsenal in the world, and in turn, the image and message of the American armed forces get projected before a global audience.

Captain Russell Coons, Strub’s colleague in the Navy, says that they participated in Captain Phillips because it was “an opportunity to highlight our capabilities and showcase Navy’s anti-piracy and maritime security operations to a worldwide audience.” The script required no changes for approval. But some do.

Take for example, this summer’s Superman reboot, Man of Steel, which was initially denied Pentagon support. Strub found the script’s portrayal of the military “cartoony.” Warner Bros. asked him to reconsider, flying him to L.A. to meet screenwriter David S. Goyer, who modified his script to incorporate Strub’s suggestions.

“It’s hard to say what’s realistic in the context of these pictures that are fundamentally not realistic,” Strub said. “The way people treat each other we hope is realistic. Competent, civilized, compassionate, professional.”

Intelligence also matters. “When civilian-type scientists are in the scene there is a tendency for the scientists to be the only smart people in a room full of uniforms,” Strub said. “You know there’s a lot of senior officers out there with Ph.Ds in physics.”

The producers weren’t charged to use the equipment, which was essentially idled during filming, but paid for its transport to Edwards, including the travel and lodging of the vehicle operators and aircraft crews, said U.S. Army Public Affairs’ Kenneth Hawes.

All told, raiding the military closet cost less than $1million of a movie with a budget around $200 million, offset by about $100 million in promotional tie-ins. The Air Force and the Pentagon declined to provide the full invoice billed to the producers.

“I don’t think it there was any reimbursement [for operating the ships during filming on Captain Philips],” said Strub. “I think it all worked around training.”

This awards season Sony is betting big on Captain Phillips. To compete in this year’s Oscar race, Universal is moving up the release of Lone Survivor, the true story of Marcus Luttrell, who made it out of a failed SEAL team raid on a Taliban leader in Afghanistan.

Last year, the real-life inspired CIA thrillers Zero Dark Thirty and Argo [neither were Pentagon-supported] ran neck-and-neck in the race to Best Picture, with Argo bringing home the statue.

As military-themed movies compete at the box office and the Hollywood popularity contests, these successes pave the way for similar films. Angelina Jolie is currently shooting Unbroken, a biopic of an Olympian turned World War II POW, in Australia after considering using a U.S. Army base in Hawaii. The actress has cast real servicemen she met on a trip to a military hospital in Germany. Spielberg met with Strub before exiting American Sniper, about the Navy’s most deadly shooter; Clint Eastwood is now circling the project which stars Bradley Cooper.

Repeat military collaborator Peter Berg filmed Lone Survivor at Kirtland Air Force Base in New Mexico. The film, shot on a $40 million budget, didn’t have to pay location fees, “because the land’s already been paid for,” says Strub. The base also happens to be one of the training grounds for Pararescue Jumpers, the Air Force Special Forces unit that rescued Luttrell.

With the use of active duty military personnel who are currently training, filmmakers are also able to skirt the Screen Actors Guild (SAG) daily minimum rates ($153 for eight hours plus overtime) for unionized actors. Then they save again by not having to pay residuals.

It’s not just true stories of military valor that get government assistance. Comic book and other big budget franchises including Ironman, Godzilla, Transformers, and television shows such as Army Wives, Hawaii 5-0, and NCIS — all receive support from the DoD war chest.

Pentagon support can make the difference in making a movie or not. Producer Duncan Henderson has worked with Strub on three films, most recently, Berg’s $220 million Battleship.

“You couldn’t make Battleship without the help of the military. It would have cost tens of millions if you could even make it work at all,” Henderson said. The filmmakers filmed during RIMPAC — the world’s largest international maritime warfare exercise, which occurs every two years — getting footage of more than 10 different ships with jets worth millions sitting on their decks. “To take any one of these ships out to sea the fuel costs alone would be astronomical. But they’re going out already — you pay for costs that are over and above what they’re doing.”

“It’s a world of finite resources: manpower, time-wise, jet-wise, they’re going to give it to whoever they think can help their cause and basically put the military in a good light,” Henderson said.

Yet does appearing in motion pictures actually help the military?

Despite the assumption that 1986’s Top Gun increased waves of Navy fighter pilot applicants (recruiting booths were set up at some movie theaters) it is impossible to track.

“You get anecdotal information, there’s no statistics, no metrics, no scientific data. It’s just assumed,” Strub admitted. “In some cases, like Black Hawk Down, it was the leadership’s interest in setting the record straight and recognizing the valor and competence and bravery of the combatants, particularly those who lost their lives. It’s far more in these people’s minds than helping with recruiting and retention.” He added that the film was of high personal interest to then Chairman of the Joint Chiefs of Staff Hugh Shelton.

Aside from controlling its image for an ever-increasing movie audience, for the military and Hollywood players, there’s also the element of mutual back-slapping. Even for Hollywood veterans who have regular access to money, fame, and power — there’s the pure rush of such access. “It was one of the most enjoyable and one of the most amazing times I’ve ever had filming,” Roven, who’s produced dozens of movies, including the latest Batman series, said. “Guys who work at Edwards who are doing this Right Stuff kind of thing — they imagine that working on movies is really glamorous and amazing. And we who work on movies think of those Right Stuff guys as being glamorous and amazing.”

A shorter version of this story appeared in the January 13, 2014 issue of Fortune.