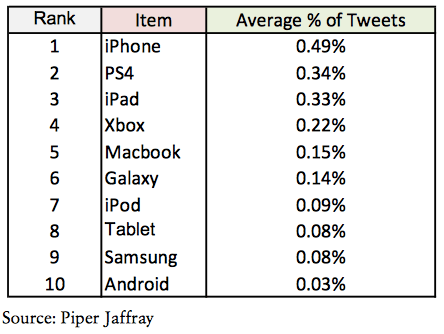 Where are the Cabbage Patch Kids of yesteryear?

According to Piper Jaffray’s Gene Munster, all of the top 10 most wished-for Christmas gifts this year are computers of one sort or another.

That may have something do with Munster’s methodology: Counting 25,000 tweets that included the tags #Wishlist and @Santa.

In any event, Apple (AAPL) led the pack with two of the top three items (No. 1 iPhone, No. 3 iPad) and four or five of the top ten, depending on whether you count the generic “tablet” as an Apple product. Samsung had two or three (“tablet” again). Sony (SNE), Microsoft (MSFT) and Google (GOOG) each had one.