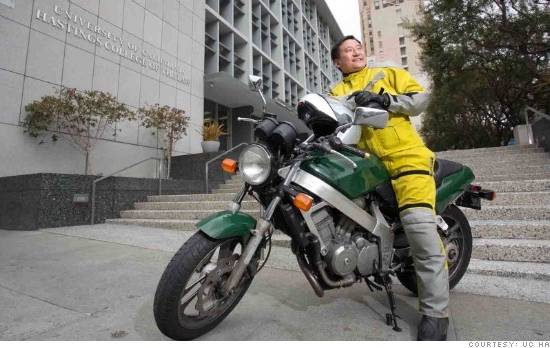 (Tipping the Scales) — “You’re going to make me sound either like a visionary or a nut,” quips Frank Wu in the conference room of his San Francisco office. “I’m good with that … it’s hard to tell the difference.”

As chancellor and dean of the University of California’s Hastings College of the Law, Wu has certainly been called both. It’s not because he walks through San Francisco’s legendarily sketchy Tenderloin neighborhood every day on his way to work — he even sent out a campus-wide email inviting students to join him. Or because he’s watched a full episode of “The Real Housewives of Atlanta” and deemed it “poignant, funny, and touching,” mainly because it featured “blasian” (black-Asian) Lisa Wu Hartwell — interracial dynamics are a favorite topic of his. Or because he zips around on a motorcycle and blogs about it. No, the reason people have called him nuts goes beyond all that.

Wu announced in the spring of 2012 that he would slash enrollment at UC Hastings by 20%. It’s a bold move, but not particularly singular. (In 2013, 54% of law schools cut the size of the entering class, according to a Kaplan Test Prep survey of law school admissions officers). Rather, the rationale behind the move, revealed in a 2012 interview with USA Today, was what triggered admiration, astonishment, and even a little acrimony: “The critics of legal education are right…. There are far too many law schools and there are too many law students, and we need to do something about that,” Wu said. Coming from the dean of a highly respected law school, it sounded a little crazy.

Wu compares law schools to Detroit automakers that assumed that when gasoline prices came down, people would flock to American-made cars again. “They mistook the cycle for the long-term trend,” Wu points out. “I believe we’re living through profound structural change. It’s not a cycle.”

Wu is not particularly good at sitting still (he’s already made tea and adjusted the office humidifier within the first 15 minutes of an interview). And he has a clear affinity for schools that buck the standard mold. “Most institutions of higher education are generic. If you swapped the logo, the color, and the name in their catalogs for that of a rival down the street, no one would ever know the difference,” he says. “I’m interested in institutions with a mission, a sense of identity, a sense of community, a reason for belonging.”

It may sound like airy rhetoric, except his resume backs him up. Wu taught at Howard University, the nation’s leading historically black college, and China’s Peking University School of Transnational Law, which conducts its classes in English and awards an American juris doctor degree. Wu has also been a trustee at Gallaudet University, America’s only university for the deaf and hard of hearing, and currently serves as a trustee for Deep Springs College, a selective, all-male Ivy League feeder school situated on a student-run ranch near Death Valley.

UC Hastings also occupies a unique niche — the law school remains separate from the University of California after the founding benefactor, Justice Serranus Clinton Hastings, stipulated that the campus must remain in San Francisco and could not be governed by the University of California regents. Even today, the school is run by a nine-member board of directors, and Wu holds the dual title of dean and chancellor.

From childhood isolation, a desire for community

To understand Wu, you first have to understand Vincent Chin, a 27-year-old Chinese American from Detroit who became a martyr in 1982. He was not a model minority, according to Wu. “If he were white, he’d be a good old boy: He liked to drink. He had a temper. He drove a little too fast. He flirted with women. He dropped out of college, but he settled down,” Wu adds. Chin was about to get married. In a final fling, he celebrated his bachelor party at a strip club with friends. There, a drunken confrontation turned deadly: Two white autoworkers chased Chin down to a nearby McDonald’s and bludgeoned him with a baseball bat, cracking his skull open. Chin died from the wounds, and the wedding guests attended his funeral instead of his nuptials. The perpetrators, meanwhile, got off with three years of probation and a $3,000 fine. The incident incited the Asian American community and inspired Frank Wu to make a career out of seeking justice. He’s now researching a book on Vincent Chin.

Wu saw a bit of himself in Chin. Born in 1967, he grew up in the Detroit suburbs as a member of the only Asian American family on his block. His father worked in the auto industry; his parents had moved to the U.S. from mainland China by way of Taiwan. Wu vividly recalls being “teased and taunted, called ‘chink’ and ‘Jap,’ and being asked if I eat dogs, if my parents were communists, how I could see with eyes like that and that sort of thing.

“In an era before multiculturalism was celebrated, you sort of grow up thinking that you’re crazy,” he says. Vincent Chin’s experience struck a chord: “It was mistaken identity twice over. I heard it as a kid all of the time, ‘Well, you all look alike.’ And here someone Chinese was mistaken for Japanese and someone who was American was mistaken for a foreigner…. That’s why I became a lawyer.”

His childhood has shaped his vision for UC Hastings. “My goal is to build something here that’s different, that’s distinctive, that’s unique, and that is for people who understand mission and community.” However, that community is shrinking by design. True to his word, Wu has cut the class size. In 2011, UC Hastings graduated 411 students. The next year, only 317 students were enrolled and 331 students in 2013. He’s also adamant about giving the law school an interdisciplinary focus. “I meet a lot of lawyers who say, ‘I don’t do numbers.’ My message to anyone who says that here is you’ve come to the wrong law school. This is a law school that does numbers.” Which is why the school offers such courses as Financial Basics for Lawyers.

Wu is also big on global and hands-on experience. “Frank came in with a bold vision for emphasizing our strengths in international programs and experiential learning,” says Shauna Marshall, UC Hastings’ academic dean. “He launched a strategic plan to really prepare students for the future and not just doing scholarship and research in the clouds,” she adds.

But change doesn’t come without its critics. Some have pointed out that UC Hastings laid off 10 non-teaching employees and another 10 jobs were reduced from full-time to part-time after the enrollment cuts. Others point to an increase in resident tuition, which jumped by more than 16% in three years, from $40,836 in 2011-2012 to $47,500 in 2014-2015. In others words, the classes may be smaller but the students are paying for it. However, prospective students are still applying by the thousands. The school received 3,948 applications in 2013.

Students also appear willing to get behind a dean who is okay with making difficult decisions. UC Hastings student Jared Clark, 28, who graduated in May 2013, calls Wu a “vanguard” in recognizing that the traditional law school framework was simply not sufficient in the current economy. “When you go to law school, and especially if you go to school these days, when the future is not so clear for graduates as it was five years ago, you hope you have a dean that is forward thinking, energetic, and is willing to make the tough calls to make the future better for graduates of that school,” he says.

For Wu, the decision to shave enrollment goes beyond a desire to keep the caliber of students high during a nationwide dip in law school applications. (UC Hastings received nearly 2,000 fewer applications in 2013 than in 2010). Law schools shouldn’t simply react to the changing market; they need to lead the way by offering alternatives to the traditional J.D., according to Wu. Legal education is still worthwhile, but the J.D. may simply be overkill for some jobs. He compares it to the medical field, where once doctors and nurses did everything from drawing blood to scheduling appointments; now, lab technicians take blood and analyze results, and administrators handle schedules.

Wu believes the same things are happening in law. There is plenty of “challenging, interesting, well-compensated work that is J.D.-optional,” he contends. So the question then becomes how do law schools push people into these fields? One way is to give them the necessary skills without the classroom time and debt incurred with a J.D. In 2011, the school introduced a one-year Master of Studies in Law for health and science professionals who need legal skills to run a hospital or influence policy but aren’t looking to practice. It’s these gaps in education that need to be filled, according to Wu. “Is legal education worthless?” he asks. “I don’t think it’s worthless. That’s just silly. There are things that are worthless; I think it’s worthless to study astrology…. But I believe in legal education. Everything in our democracy depends on law.”

The dean’s best work may be ahead of him still. Particularly, if he takes his cues from UC Hastings’ seventh dean, David Snodgrass. Snodgrass, who served as dean from 1940 to 1963, scooped up law luminaries who were forced to retire from other law schools at age 65. This crew of sexagenarians became known as the Sixty-Five Club and included former law school deans, two California Supreme Court justices, and even U.S. Supreme Court Justice Arthur Goldberg. “It’s a crazy idea. I mean just nuts. Even today, can you imagine someone saying, ‘I’m going to start a business, and the only people I’m going to hire are retirees?'” Wu asks. But, as he points out, “Your great work in law almost always comes later in life.” At 46, Wu still has time on his side, and the legal community is waiting to see what he will do with it.

More from Tipping the Scales: