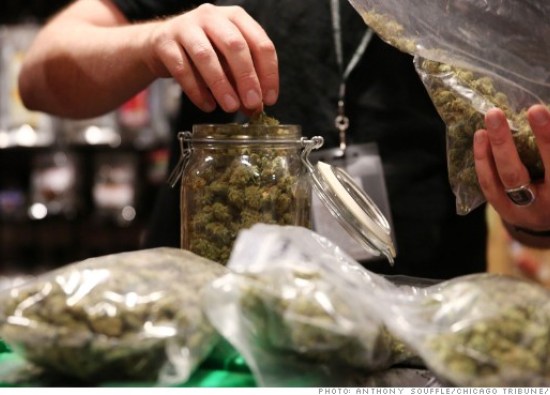 Kelly Brough, president and CEO of Denver Metro Chamber of Commerce, is not happy talking about legal marijuana, the booming industry now nudging its way into the Denver business world. She is quick to point out all the steps made by the chamber to protect existing Denver businesses from any negative effects, real or perceived, of the rapidly expanding marijuana business.

“We were not supportive” of legalization efforts, Ms. Brough says. “But when it passed, we wanted to make sure it was done smart and right.”

By that she means defending the right of businesses to enforce a zero-tolerance drug-use policy with their employees for a substance that has become as legal as alcohol, a right that has been established by two recent court cases that have returned pro-business rulings, a fact that Ms. Brough is quick to point out to anyone asking about the economic effects of marijuana upon the city whose business community she represents.

She does not yet think that there has been a perceptible positive impact to the local tourism industry. “Not seeing it,” she says. When pressed, she concedes that some people might be coming to Denver to smoke pot, but the “up and down sides have balanced things out,” suggesting that the legal marijuana boom might be scaring away some tourists who don’t like the idea — or smell of it.

Despite this conservative position, there is one area of the economy that Ms. Brough concedes has been boosted by legal weed: Denver’s commercial real estate.

According to the Colorado Department of Revenue’s marijuana enforcement division, the city of Denver counts roughly 650 medical and recreational marijuana dispensaries. Those storefronts are supplied by 910 grow operations and 166 infused product kitchens — all which legally occupy an estimated 1.5 to 3 million square feet of commercially zoned space in Denver’s outer industrial zones.

Exactly how much real estate is unclear, but some informed estimates are eye-popping: “This year, 3 million square feet or more purchased and probably another 2 million leased,” says Jason Thomas of Avalon Realty Advisors, a firm that is handling increasing numbers of transactions that turn nondescript warehouse spaces into massive marijuana growing operations.

Even conservative estimates acknowledge the fundamental impact on Denver’s mainstream real estate market. Alec Rhodes, managing director at Cassidy Turley Commercial Real Estate Services in Denver, estimates the impact of marijuana growing operations at merely 1.5 million square feet, a contribution to the local economy that “got us through the recession.”

“It kept our vacancy rate in check during the downturn,” he says, noting that the vacancy rate was 8.6% at its worst and is now “very tight” around 5%.

Meanwhile, vacancy for similar properties in Colorado Springs, a community that has opted out of the new marijuana laws, is “a whopping 12%,” according to Sean Sheridan, a real estate developer there.

Back in Denver, where the market has been supercharged with big money from out-of-state marijuana consortiums, Rhodes expresses equal parts wonder and concern on how rapidly the industry has taken root.

“Government is really playing catch-up,” he says, and he encourages others to pay close attention to how things are playing out in Denver because “we’re a pretty good case study of what the rest of the country is going to see.”

That case study involves out-of-state investors funding grow operations that feed dispensaries popping up all over town with seemingly few restrictions and little oversight. Last month, 30 dispensaries were raided by federal agents for violations of the few remaining marijuana laws, but those 30 raided storefronts accounted for maybe 5% of the total retail marijuana stores in Denver.

On Jan. 1 the Denver marijuana market will officially opens its doors to recreational use for anyone with a valid ID proving he or she is 21 years old. The cannabis that will be sold in the new year is being grown and harvested right now in Denver’s outer industrial zones, keeping vacancy low and flowing money into Denver’s economy.“Whether you’re for or against marijuana,” Thomas says, “you can’t deny that it’s an industry that has caused significant absorption,” referring to the rate by which available property is being occupied.