Chart of the day: Surge in Apple’s Chinese smartphone sales 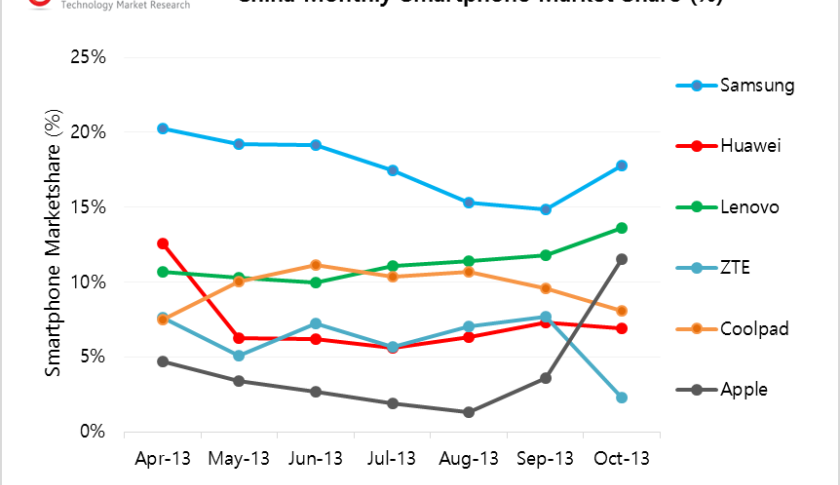 Amid almost daily signs that a distribution deal between Apple (AAPL) and China Mobile (CHL) is imminent comes the attached chart from Hong Kong-based Counterpoint Research. It shows that even without the formal endorsement of the world’s largest carrier, Apple’s share of Chinese smartphone sales in October had surged to 12%.

Apple’s smartphone marketshare climbed to 12% mark in China in October, instantly making it the 3rd largest smartphone player in the market up from a modest 3% share in September. Although the iPhone 5s didn’t attract long queues outside Apple retails stores as the iPhone 4S did couple of years ago but it definitely was more successful compared to what iPhone 5 registered in terms of overall sales in a month. Also, with China Mobile deal on the horizon, Apple iPhone 5s at all three carriers will for sure ignite a ‘price war’ boosting the overall iPhone 5s sales in China. This might allow Apple to even reach the No. 1 smartphone player in December or January in China.

The report notes that Samsung’s Galaxy S4 saw a temporary uptick in October due to a price discount in some markets, but that the S4 had been “pushed … towards the end of its ‘flagship lifecycle’” by the Galaxy Note III.