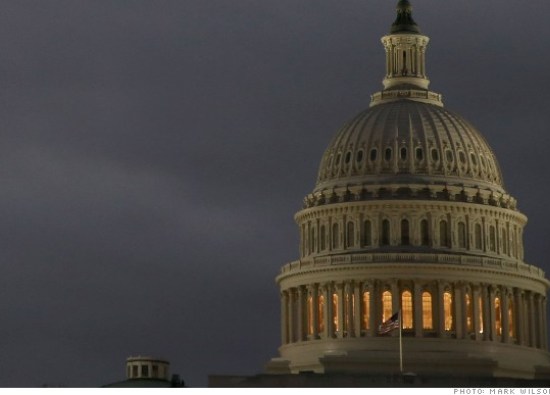 While shoppers rush full tilt toward Christmas, the number of people living in economic distress is on the rise.

We face an economy of “exclusion and inequality” in which “the hearts of many people are gripped by fear and desperation, even in the so-called rich countries,” wrote Pope Francis, Time Magazine’s Person of the Year, in late November.

U.S. Senators wrote to the SEC just before Thanksgiving that 95% of the rebound in incomes since the crisis has gone to just 1% of the population.

The central threat to capitalism today is snowballing inequality and crises that destroy the lives of those least able to absorb the shocks. Real median incomes, the senators wrote, are lower today than they were in 1999.

There’s a lot that could be done to turn the tide, if we muster the will. Small, concrete steps in public policy could help make the benefits of capitalism available to everyone. We need to say “no to an idolatry of money” and “no to a financial system that rules rather than serves,” Pope Francis wrote.

Measures in the nearly three-and-a-half year-old Dodd-Frank Act along with other actions could help.

Financial regulators approved a Dodd-Frank requirement known as the Volcker rule that limits banks’ ability to engage in proprietary trading. (Proprietary trading occurs when a bank trades for its own benefit rather than on behalf of its clients.) While the rule is not perfect, it is an important step forward. CEOs will have to attest that their firms are following this rule.

MORE: A blueprint for creating better jobs – and bigger profits

The genesis of the Volcker rule came from discussions held in 2008. As background, at the end of 2006, investment banks were giving out record bonuses for record earnings. I spoke out because a sizable chunk of those earnings was coming from trading profits and other activities that do not create sustainable economic value. In December 2006, the Wall Street Journal reported that Lehman was going to “award stock valued at $186 million over the next 10 years” to retain CEO Dick Fuld “by changing terms of stock grants dating back a decade.“

A sidebar to the Journal article showed the 2005 paychecks of Wall Street’s titans. At Goldman, Hank Paulson had earned $38.8 million while Lloyd Blankfein pulled in $30.8 million. At Merrill Lynch, Stan O’Neal’s payday was $35.5 million, and at Bear Stearns, James Cayne’s was $30.3 million. Of these companies, only Goldman has survived.

From 2005 to 2007, Goldman Sachs’ trading portfolio was doubling in risk by its own measure, and Lehman was increasingly dependent on trading profits, according to its financials. On top of that, mergers between investment and commercial banks were changing corporate cultures — and not in a good way. As a result, workers were encouraged to push products rather than put client needs first.

So, in 2008, I supported a ban of proprietary trading because I believed it did not provide long-term benefits, gratuitously goosed CEO paychecks, and fueled excessive risks for banks and their customers.

Today, the reasons for such a ban have only grown stronger. We now know that the megabanks have been involved in ongoing manipulations of a wide variety of markets in which they trade — and have continued to engage in excessively risky trading a la JPMorgan’s (JPM) London Whale. Moreover, their ability to manage themselves is still a work in progress.

To grow, thrive, and create jobs, companies need long-term, patient capital — not traders’ churns. As a policy move and a boost to the economy, a financial transactions tax would help this effort.

But laws and regulations, it appears, can move wayward professionals in the right direction. One-third of those surveyed believe that “in the financial services industry, it is more important to ensure business practices are legal rather than ethical.”

Even former Goldman Sachs (GS) CEO and Treasury Secretary Hank Paulson believes regulatory action is important: People have viewed banks unfairly and “flawed government policy” is to blame, he said in October. Whether you view banks as victims or villains, policy matters.

The comment period for another important Dodd-Frank measure just concluded. Section 953 mandates corporations disclose a ratio of CEO to median worker pay. SEC Chair Mary Jo White did a good job outlining a fair and useful rule with flexible implementation. Let’s hope the SEC moves quickly to implement the disclosure. Since boards already report CEO pay to shareholders, the only new information required by the rule is median worker pay. Companies will have the option to use statistical techniques if they have trouble figuring out exactly what median pay is.

Boards can’t do a good job of assessing risks or corporate culture without better information on pay trends. Boards need to gather facts beyond median pay. They need to ensure management has created a business model that can create value while paying a living wage. They need to address the plight of homeless employees, workers who go hungry, and staffers that teeter on the brink of losing their homes. And they need to dig in to the causes of persistent pay bias.

Improvements in minimum wage requirements can also help. There has been some recent success on this front. Washington State’s SeaTac community raised its minimum wage to $15, and multiple Washington D.C. suburbs agreed to raise the minimum wage at the same time. These are hopeful trends.

Economist Dean Baker wrote last month that an “aggressive stimulus to bring the economy back to something resembling full employment” would give workers the ability to negotiate decent wages. So too would trade policies that don’t undermine U.S. wage rates, he said.

Inspired by Warren Buffett’s call for higher taxes on the rich, Jon Justesen, a successful rancher and candidate for governor of Oregon, wants to establish a fairer tax system in that state, eliminating income tax on earnings below $100,000 and progressively taxing those with incomes above that. “It’s a privilege to be able to pay a higher tax rate … This has to be our leadership role going forward,” he told me.

At the height of the financial crisis, seemingly unaware of the depth of despair and human suffering, Goldman Sachs CEO Lloyd Blankfein remarked that he was “doing God’s work.” By contrast, Pope Francis observed the following in November: “How can it be that it is not a news item when an elderly homeless person dies of exposure, but it is news when the stock market loses two points?”

Growing public resolve is a welcome sign. With 2014 right around the corner, it’s time for us to pause and think about what we are doing — and what the phrase “doing God’s work” really means.

Eleanor Bloxham is CEO of The Value Alliance and Corporate Governance Alliance (
http://thevaluealliance.com
), a board education and advisory firm.