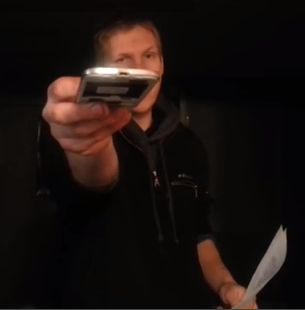 FORTUNE — One difference between Apple (AAPL) and Samsung is how they handle customer complaints.

When a Chinese flight attendant died last summer, apparently by electrocution from an iPhone plugged into a third-party charger, Apple did three things:

When Richard Wygand, a Canadian racing enthusiast, complained to Samsung that his Galaxy S4 caught fire while charging overnight, the company asked for video proof.

But when Wygand posted the video on his GhostlyRich YouTube channel and tweeted about it, the company offered to replace the phone (which was still under warranty) with a similar model only if…

[Thanks to BGR‘s Zach Epstein for spotting it. The statement Samsung gave Business Insider: “Samsung takes the safety and security of our customers very seriously. Our Samsung Canada team is in touch with the customer and is investigating the issue.”]

Below: Samsung’s form (with names etc. removed). Apple has also been known to require a signee’s silence, and its legal boilerplate is, if anything, even denser and more inscrutable. But it usually doesn’t mention “servants.”