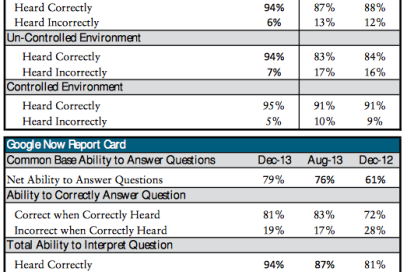 Three takeaways:
– Google Now has overcome its initial deficit and is now roughly the equivalent of Siri in its ability to interpret spoken queries and answer them correctly.

– Siri has weaned itself almost entirely from its dependence of Google search, reducing its reliance from 27% of answers in December 2012 to 4% now.

– Neither service is that great. Siri got C+ from Munster (up from C last December and a D in the summer of 2012). Google Now also got a C+ (up from a D- last December).

Passing grades, but not much more than that.