Why Ryan Seacrest (For real!) is the future of media 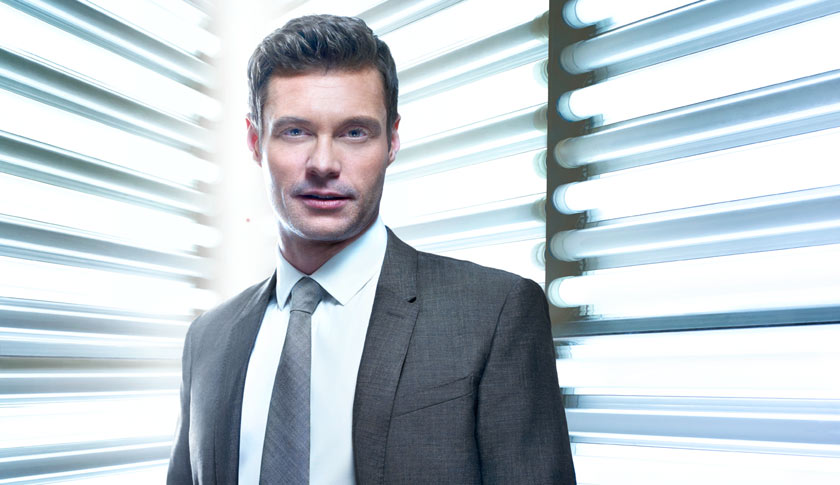 The one-man brand produces TV, chats up stars, and woos advertisers. He’s an emblem of where show biz is headed.

If television executive and personality Ryan Seacrest represents the future of media — and many entertainment moguls think he does — then the world should gird itself for more reality TV and more shows like Keeping Up With the Kardashians, which Seacrest’s company produces, along with five other television series (three of which are Kardashian spinoffs).

In an industry of workaholics, Seacrest is “the single hardest-working person I know,” DreamWorks Animation CEO Jeffrey Katzenberg says. In addition to Seacrest’s production company and a high-profile, lucrative gig ($14 million a year) as American Idol’s frontman, he also hosts the nationally syndicated radio show On Air With Ryan Seacrest, plus a weekly top-40 countdown.

And the 37-year-old is just getting started. He’s widely rumored to be Matt Lauer’s eventual replacement on Today. Peter Chernin, the former president of News Corp. (NWSA), thinks Seacrest is positioned to become an international star. And then there’s his burgeoning business empire, which is poised to keep churning out high-margin reality television shows. “He’s entertaining and engaging, fine, but at the same time he understands how you can build a show around a brand or please an advertiser,” says Bob Pittman, CEO of Clear Channel.

There’s no question technology will dramatically change the way we consume media in the next 10 years. Music and video content will live in the cloud and be delivered to our smartphones and tablets over Internet-based networks. And those same devices will make it even easier to shoot and upload amateur videos and songs.

It is a world in which Seacrest is sure to thrive: His ubiquity ensures that the Seacrest personal brand will reach a big swath of consumers. And an influx of Internet-connected devices can only mean more outlets for the programming he churns out.

When it comes to the next few years in the entertainment landscape, Seacrest espouses a sort of “back to the future” philosophy. He tells Fortune: “As much as we all talk about the future and how so many things are merging, there is a simplicity that is crucial.” A simple spectacle like the Kardashians may be just the antidote to a complicated media future.

Beyond Kim and Khloe

Among the reality television Seacrest is known for producing, there’s one hit show in his stable that stands apart: Jamie Oliver’s Food Revolution. The program, which Seacrest produced with Oliver, follows the British chef and restaurateur as he attempts to revamp school cafeterias and other unhealthy American menus.

The program is a far cry from glossy shows such as American Idol, which Seacrest hosts, or celebrity-driven reality fare like Keeping Up With the Kardashians, which Seacrest’s company produces.

Indeed, the Oliver show, which debuted on ABC in 2010, might at first glance seem like an outlier in the otherwise lighthearted (some would say superficial) Seacrest portfolio.

But it turns out the cooking show, which has since ended its run, is exactly the kind of TV fare Seacrest hopes to keep delivering. “We’ll see much more focus on healthy eating in schools and hospitals in the year to come, and I want to continue to produce shows that directly effect change,” he tells Fortune. “We’ve gone too long without addressing issues like child obesity, so to be able to tell those stories and help people through television is a powerful thing.”

Seacrest is also passionate about finding ways to build his burgeoning media business on all platforms, from old-school media such as radio to the web and its various social platforms, including Twitter. “We’re seeing platform, technology, and content all converging, and it’s happening quickly,” he says. “It’s exciting to me. There’s an appetite for more original content than ever, and I have a company that creates content, whether it’s distributed in short form, reality form, live form, or game form.”

In a perfect world, what else would Seacrest like to accomplish in the next five to ten years? “I’d like to make time slow down,” he declares. “We’re developing heavily in that category.”

More from Fortune’s guide to the future

A new vision for the city of the future

The workforce of the future: Older and healthier