What is a stock split and how does it impact your portfolio? 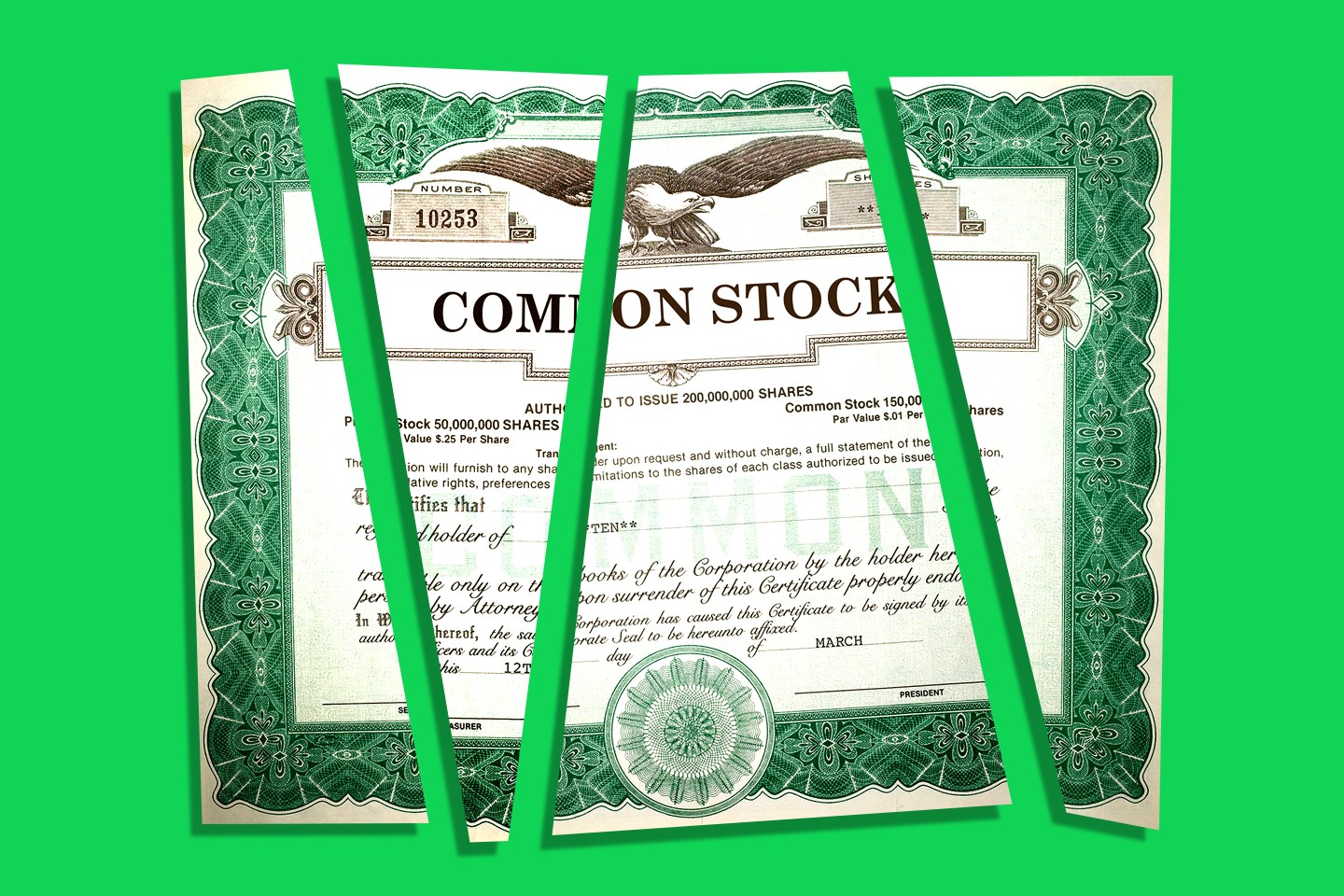 Stock splits do not impact the overall value of your assets.
Photo illustration by Fortune; Original photo by Getty Images

For an investor, the assets in your portfolio may undergo changes over time. They may increase or decrease in value, and sometimes they may be impacted by what’s known as a stock split.

A stock split can have various ramifications depending on the type of split that takes place. In some cases, you may end up with more shares, and in other cases with fewer. But importantly, the value of your holdings does not change.

What is a stock split?

A stock split is when a company breaks an existing share into multiple shares. In other words, one share of a particular company’s stock in your portfolio may be broken into two shares, three, or even more as a result of a stock split.

Publicly traded companies periodically choose to split their stocks when share prices climb too high. Taking this step reduces the unit price of each stock.

“For example, if a company’s share price is $100, the board might decide that by splitting the shares, they can make their stock more accessible to more investors. The board could authorize a two-for-one stock split so that holders of one original share end up with two shares after the split,” says Andrew Crowell, financial adviser and vice chairman of wealth management at D.A. Davidson. “If the share price was $100 before the split, the post-split shares would be $50 each.”

Stock splits allow a company to increase the liquidity of its shares—or how often the shares are traded on a stock exchange. This is also referred to as volume, which is the total number of shares traded within a particular time frame.

“A low-volume stock is not traded very frequently,” says Jon Klaff, general manager of Magnifi. “The price of a stock can impact its volume, with higher prices making it more difficult to buy and sell. Most people don’t want to be stuck with a stock they can’t sell.”

The importance of stock split proportions

The exact proportion of the stock split plays a significant role in the resulting price of the individual shares. Stock splits often happen on a two-for-one basis, which means if you had one share, you now have two, as Crowell mentioned. But depending on how much the company wants to reduce its share price, there may also be three-for-one splits, four-for-one splits, and so on.

In fact, in some cases, the proportion of the split is even higher, such as 20-for-1. That was the case with Google’s parent company Alphabet, which split its stocks 20-for-1 in July, making shares significantly more affordable to retail investors. As a result of the split, Alphabet’s Class A stock prices dropped from about $2,255 per share to about $112 each, making purchases far more palatable to those looking to buy whole shares.

What are reverse stock splits?

Not all stock splits are designed to decrease share prices. In some cases, the split may be aimed at just the opposite—increasing the price per share. This is known as a reverse stock split.

“A company will typically do this if a stock price is in the low single digits—such as $3 per share, or $2 per share,” says Dave Heger, senior equity analyst at Edward Jones. “If a stock trades below a certain cutoff point, you run the risk of getting delisted, and so the company will do a reverse split.”

In a reverse split scenario, if a stock is currently $3 a share and the company engages in a 10-to-1 split, the price increases to $30 per share, and the total number of shares in your portfolio for that company decreases.

How does a stock split impact your portfolio?

When a stock splits, the overall dollar value of the holdings in your portfolio for that stock generally does not change. You simply have more—or less—stocks than you did prior to the split. But because the price of each stock has also been altered by the split, the value ends up being identical.

Despite this fact, there’s often a perception among investors that stock splits do indeed add value—at least over the long term. This is because when a stock becomes more affordable, it may attract more investors, which may ultimately drive up the price.

“The split may trigger renewed investor interest, potentially attracting more retail shareholders into the stock who might view it as more attainable to buy,” continues Heger.

Pros and cons of stock splits

While a stock split may not change the overall value of your holdings, there are some pros and cons to these types of events.

While there’s often a perception that stock splits add value to your portfolio, that’s not exactly the case. In the short term at least, it’s a wash. The overall value of the stocks that split remain the same. However, if there’s renewed investor interest in the stock as a result of the split, your holdings may become more valuable over the long term as the price ticks upward.