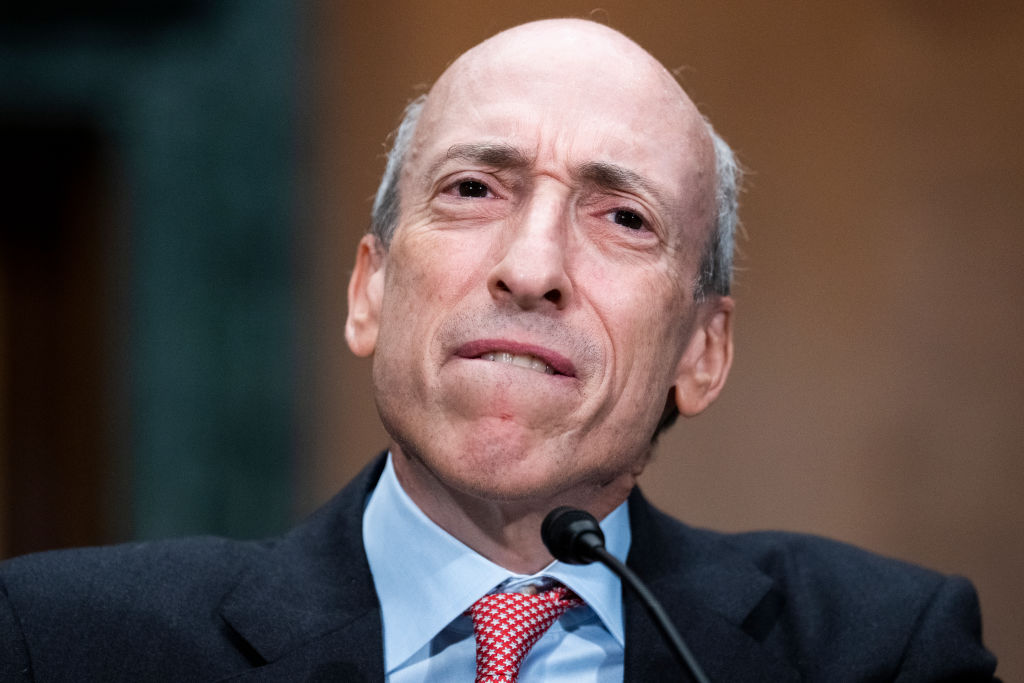 Gary Gensler blew it again. After his agency failed to warn investors about Terra and Celsius—whose collapses this spring sparked a trillion-dollar investor wipeout—the Securities and Exchange Commission chair allowed an even bigger debacle to unfold right under his nose. I’m talking, of course, about the revelation this week that the $30 billion FTX empire was a house of cards and that its golden boy founder, Sam Bankman-Fried, is the crypto equivalent of Theranos’s Elizabeth Holmes.

To be fair, Gensler was not the only one suckered by SBF. Nearly everyone else—myself included—fell for the narrative that SBF, with his cute afro and aw-shucks demeanor, was exactly the savior crypto needed to shake off its dodgy reputation and emerge as part of the mainstream financial system. The problem is that cop-on-the-beat Gensler not only failed to spot the crime—he appeared set to go along with a legislative strategy that would have given SBF a regulatory moat and made him king of the U.S. crypto market.

According to Washington insiders I spoke with, the reason behind SBF’s decision this summer to obtain control over BlockFi was to benefit from the troubled crypto lender’s recent settlement with the SEC—basically extending the amnesty BlockFi had received to FTX. Meanwhile, FTX’s recent tie-up with securities exchange IEX (of Flash Boys fame) would also help SBF’s empire come under the U.S. regulatory umbrella. All of this would clear FTX to have the U.S. market to itself as the company lobbied for legislation that could have torpedoed competitors like Binance as well as the emerging DeFi sector.

This appears to be what prominent House member Tom Emmer (R-Minn.) was referring to when he tweeted on Thursday that “@GaryGensler runs to the media while reports to my office allege he was helping SBF and FTX work on legal loopholes to obtain a regulatory monopoly.”

Gensler, a former campaign finance chair for Hillary Clinton, is of course not the only prominent Democrat who may have been willing to flex his influence on behalf of FTX. SBF, you may recall, was one of the biggest donors to President Joe Biden, while his parents—both Stanford law professors—have ties to the party. His mother, Barbara Fried, leads a group called Mind the Gap that helps raise Silicon Valley cash for Democrats, while his father, Joseph Bankman, drafted tax legislation for the powerful Sen. Elizabeth Warren (D-Mass). It’s not a stretch to imagine SBF sought to exploit these political ties to his benefit.

All of this does not mean SBF, Gensler, and other higher-ups in the Democratic party sat around plotting an explicit scheme to hand the crypto industry to FTX. That reeks too much of a wild conspiracy theory. Nonetheless, at a time when Gensler is already shrieking for more money and power to address the latest crypto crisis, this would be a good time for skeptics to ask why he failed to stop FTX in the first place—and if anyone else in high places had a role in enabling this debacle.

“The whole operation was run by a gang of kids in the Bahamas”: A look at FTX’s day-to-day operations shows them to be marked by nepotism, romantic relations, and a lack of any real oversight. (CoinDesk)

SBF’s empire includes venture capital investments in dozens of prominent crypto and fintech ventures—investments that could now be sold off in a fire sale. (Fortune)

Crypto lender BlockFi, which earlier this year took a $400 million line of credit from FTX, announced it was halting customer withdrawals. (PYMNTS)