The Law of Blockchain: Beyond Government Control? 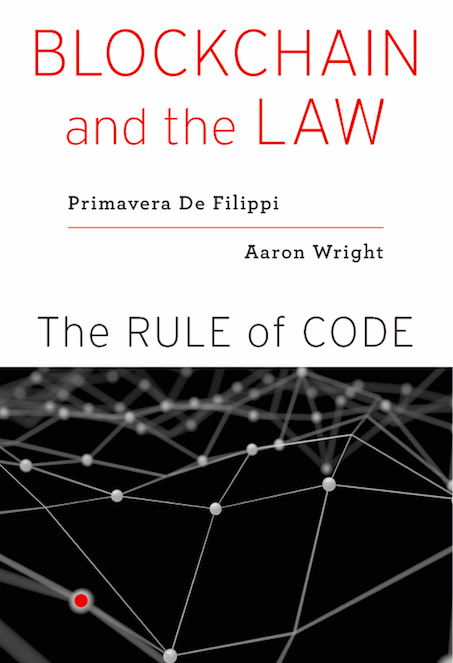 Blockchain is the most disruptive technology since the Internet, and its arrival raises hard questions about how — or if — judges and governments can control it. Should federal agencies, for instance, seek to impose “net neutrality” style rules to promote fairness on blockchain networks? Should treasury departments run mining operations to influence digital currencies like bitcoin?

Those are some of topics raised in an important new book, Blockchain and the Law: The Rule of Code, by two scholars from Harvard and Cardozo School of Law. The book attempts to do for blockchain what the likes of Laurence Lessig and Tim Wu did for the Internet and cyberspace — explain how a new technology will upend the current legal and social order.

In the case of blockchain, it’s still early days and Blockchain and the Law reflects that. It contains little in the way of case law (blockchain disputes are only now coming before judges), and the authors, Primavera De Filippi and Aaron Wright, spend considerable time explaining just how blockchains work. Namely, they emphasize how blockchain software creates permanent ledgers that are distributed across multiple computers and are mostly beyond the reach of central authorities.

The upshot is what the authors call “lex cryptographica” or a system of rules where autonomous, decentralized code — rather than legislators or judges — determine the outcome of given interactions and disputes.

This has the potential to bring dramatic changes in fields like corporate and insurance law. For instance, a blockchain can distribute dividends to shareholders according to pre-coded smart contracts. Or, in the event of an earthquake, an insurer’s blockchain can consult a third-party server (known as an “oracle” in blockchain parlance) to obtain seismic information and arrange payouts.

Such developments promise new levels of efficiency and legal certainty. But Blockchain and the Law also warns that the new technology could undermine governments and human freedom. For instance, the ability to raise money by selling tokens on a blockchain — so-called “Initial Coin Offerings” — has already let firms do end-runs around the Securities and Exchange Commission. As the authors note, blockchain could do to securities law what the Internet did to copyright law.

Meanwhile, the combination of smart contracts and Internet-connected objects could let manufacturers lock down our everyday possessions with “Property Rights Management” code that can’t be modified or overridden. More darkly, the semi-anonymous nature of blockchains can facilitate all sorts of criminal behavior: A smart contract could promise a reward to hitmen, and pay out when news of the target’s death appeared in the New York Times.

Care about crypto news? Sign up for The Ledger’s weekly newsletter.

Some of these concepts are not entirely new. In the case of connected objects taking on a life of their own, legal scholars like Ryan Calo have been exploring the implications for tort and criminal law for some time. But as De Filippi and Wright point out, the introduction of blockchains — and specifically their decentralized, near-indestructible architecture — will make it harder still for the law to keep up.

While Blockchain and the Law raises some frightening scenarios, the authors also pour cold water on the idea that blockchain technology is beyond the control of governments. Even though blockchain ledgers like bitcoin are decentralized and run by computers across many countries, state authorities can still target chokepoints in their infrastructure to exert control. In the same way governments have targeted intermediaries like search engines and ISPs to tame unruly aspects of the Internet, they could do the same to put pressure on blockchain networks.

Drawing on the model described by Lessig in Code, the authors point out law is not the only tool to regulate blockchains. Governments can also employ more subtle tools, like market operations or social norms, to shape the direction of the technology. For instance, they could participate in mining operations on blockchain networks, like bitcoin, in order to control prices and vote on coding decisions.

All in all, Blockchain and the Law is a fine, deeply-researched book that can be expected to show up on law school syllabi for years to come. The task of finding and rounding up blockchain cases may fall to other scholars, in the same way as James Grimmelmann and Eric Goldman built practical textbooks on “Internet law” in the years after Lessig laid the theoretical foundations.

Blockchain and the Law is not just a theoretical guide. It’s also a moral one, as De Filippi and Wright warn that governments who ignore lex cryptographica could lose control of the emerging world of blockchain.

“If a government does not provide protective mechanisms … the current regulatory framework government by the rule of law may eventually be replaced by a system of algorithmic governance, operated exclusively through the rule of code.”