Ukraine’s Zelensky responds to Elon Musk’s widely panned ‘peace’ plan, telling him to ‘see with your own eyes’ what Russia has done and then say ‘when we can end it’ 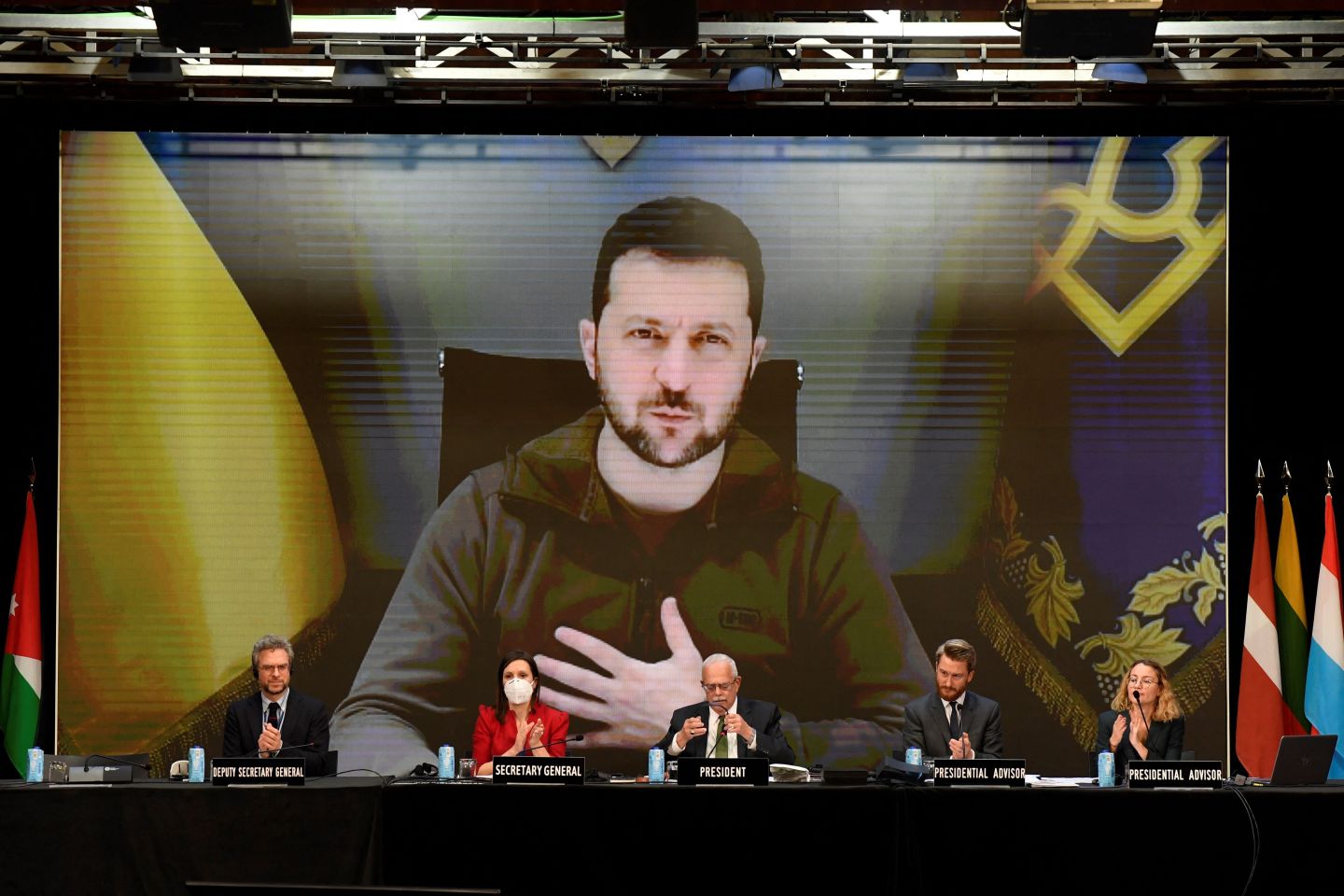 Elon Musk’s peace proposal to end the Ukraine war did not go over well with Ukraine President Volodymyr Zelensky.

In October, the Tesla and SpaceX CEO opined in a Twitter post on how the Ukraine war could end peacefully and what the likeliest form of “Ukraine-Russia peace” looks like to him.

Musk’s proposal included Russia allowing a “redo” of referendums under United Nations supervision in the annexed regions of eastern Ukraine, where citizens overwhelmingly chose to join Russia in September in an election widely considered a sham. Musk’s plan would also require Ukraine to permanently cede to Russia the Crimea peninsula, invaded in 2014, which Zelensky has previously said Ukraine intends to recapture “by any means.”

Musk’s peace plan was panned by Ukrainian politicians, and Zelensky responded to it on Wednesday while speaking at the New York Times’ Dealbook Summit, where he invited Musk to see the damage Russia has caused in Ukraine for himself before proposing ways to end the war.

“I always say very openly, if you want to understand what Russia has done here, come to Ukraine and you will see this with your own eyes,” he said. “After that, you will tell us how to end this war, who started it, and when we can end it.”

While Musk did not immediately comment about Zelensky’s invitation to personally visit Ukraine, he and his companies have been actively involved in the war since Russia invaded in February.

Musk’s spacecraft and satellite communications company SpaceX has been supplying Starlink internet terminals to Ukraine since the war began, which quickly became a communications lifeline for the Ukrainian military. In March, Zelensky said he was “grateful” to Musk for providing the terminals and his support for Ukraine.

But the two’s relationship has become increasingly frayed in recent months. In October, days after Musk posted his peace proposal, SpaceX sent a letter to the Pentagon asking the U.S. government to take over the Starlink delivery costs, CNN reported, claiming that it would cost the company $120 million for the rest of the year and almost $400 million over the next 12 months. Musk later said it was “unreasonable” to expect SpaceX to continue footing the bill, and warned he might have to terminate the initiative.

He eventually walked back from the standoff, indicating in a tweet he was prepared to continue paying the Starlink bill even though it lost SpaceX money. But his relationship with Ukraine’s leaders has suffered regardless, especially in the wake of allegations last month that Musk had spoken directly with Russian President Vladimir Putin over potential peace terms with Ukraine, claims Musk has denied. In October, former U.S. diplomat Fiona Hill, a specialist on Russia, said that Musk’s proposed peace plan was clearly “transmitting from Putin.”

“It seems that Elon began to change his opinion and we began to hear all kinds of appeals,” Zelensky said on Wednesday. “I don’t know if someone is making an influence on him or if he is making these choices himself.”

The Ukrainian military has recently made significant gains in reclaiming parts of Ukraine that had been annexed by Russia, especially in the country’s southern region of Kherson, but the Russian military has increased hostilities as a result. The invading army has targeted more of Ukraine’s critical energy infrastructure including power lines, leaving large parts of the country without electricity.

Zelensky said earlier this month that so far at least 40% of Ukraine’s energy infrastructure had been destroyed by Russian shelling, accusing Putin and the Russian military of “energy terrorism.”