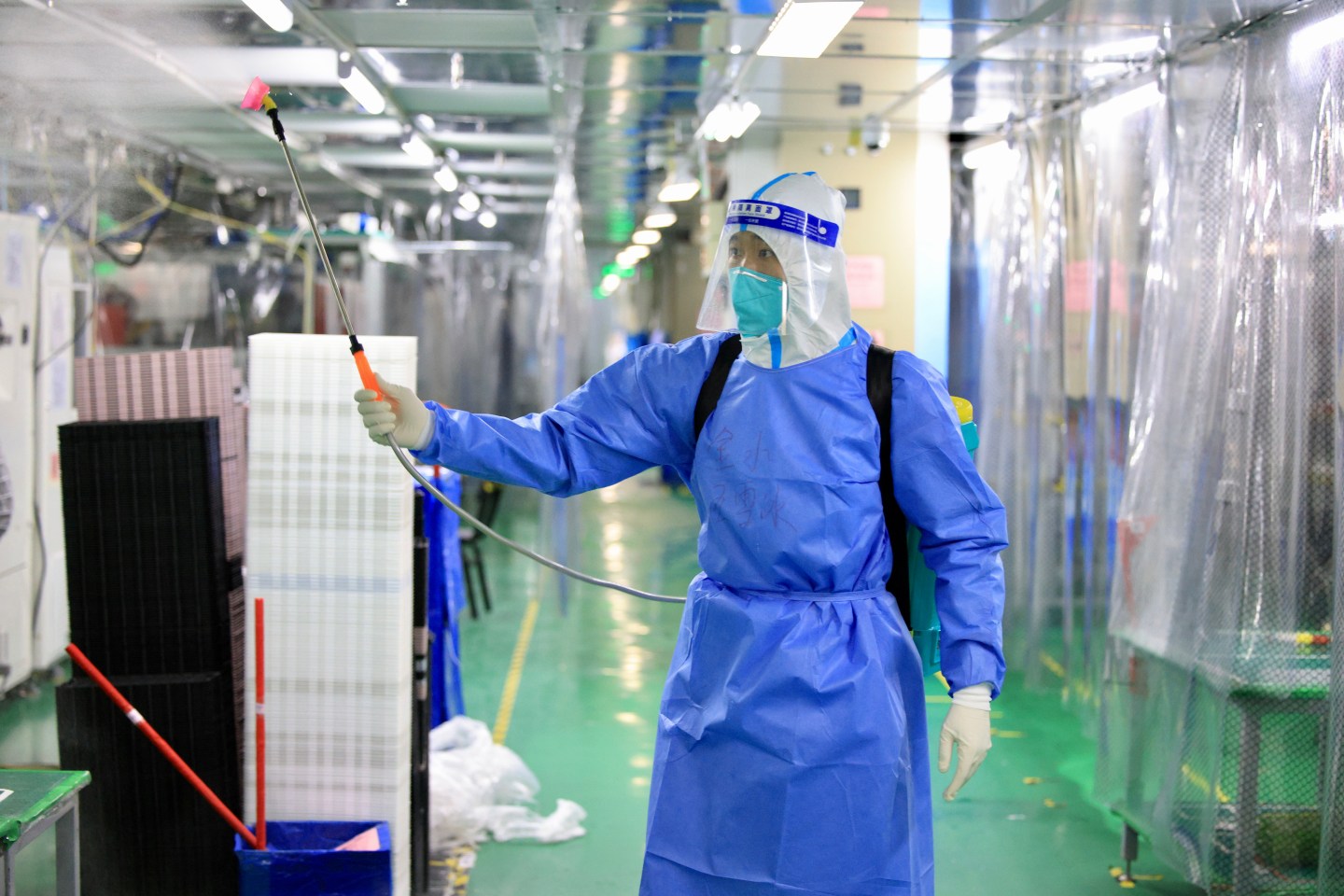 A staff member disinfects a factory at Industrial Park of Foxconn on Nov. 6, 2022 in Zhengzhou, Henan Province of China.
VCG/Getty Images

Hundreds of workers at Apple Inc.’s main iPhone-making plant in China clashed with security personnel, as tensions boiled over after almost a month under tough restrictions intended to quash a Covid outbreak.

Workers at the Foxconn Technology Group plant streamed out of dormitories in the early hours of Wednesday, jostling and pushing past the white-clad guards they vastly outnumbered, according to videos sent by a witness to portions of the protest. Several white-suited people pummeled a person lying on the ground with sticks in another clip. Onlookers yelled “fight, fight!” as throngs of people forced their way past barricades. At one point, several surrounded an occupied police car and began rocking the vehicle while screaming incoherently.

The protest started overnight over unpaid wages and fears of spreading infection, according to the witness, asking to remain anonymous for fear of repercussions. Several workers were injured and anti-riot police arrived on the scene Wednesday to restore order, the person added.

In one video, irate workers surrounded a silent, downcast manager in a conference room to voice grievances and question their Covid test results. It wasn’t clear when the meeting took place.

“I’m really scared about this place, we all could be Covid positive now,” a male worker said. “You are sending us to death,” another person said.

The Zhengzhou campus was operating normally as of Wednesday evening, a Foxconn spokesperson said. The violence had erupted after a portion of recently arrived employees raised complaints about “work subsidies” — bonuses or payments on top of usual wages, Foxconn said in a statement. But the company stressed that it handles all such compensation in strict accordance with its contractual obligations.

“With regards to the violence, we are continuing to communicate with workers and the government, to avoid a recurrence,” the company said without elaborating.

The rare instances of violence at the plant in the central city of Zhengzhou reflects a build-up of tensions since the lockdown began in October. Many among the vast workforce of more than 200,000 at “iPhone City” have been plunged into isolation, forced to subsist on spartan meals and scrounge for medication.

Many eventually fled the plant on foot last month. Foxconn and the local government appeared to have gotten the situation under control in recent weeks, promising unusually high wages to attract new staff and promising better working conditions.

Wednesday morning’s protests suggest that is no longer the case. It underscores how Xi Jinping’s Covid Zero policy, which relies on swift lockdowns to stamp out the disease wherever it pops up, is increasingly weighing on the economy and throwing swathes of the global supply chain into disarray. Beijing recently issued new directives ordering officials to minimize disruption and use more targeted Covid controls, but surging outbreaks in major cities have forced local authorities to reach for strict curbs again.

“It’s really a mess,” said Barry Naughton, a professor at the University of California San Diego who specializes in Chinese economics. “They’ve created a situation where the local decision makers are under intolerable pressure.”

The offshore yuan fell after Bloomberg’s report, extending losses and making it the worst performer in Asia on Wednesday.

The Chinese currency “is underperforming its other Asian FX peers on reports of protests at Foxconn’s plant in Zhengzhou that supplies Apple products,” Stephen Innes, managing partner at SPI Asset Management wrote in a note. “However, a broader, more optimistic interpretation is that China is hitting the limits of ‘Covid zero’ and the authorities’ efforts to loosen restrictions will continue.”

Violence has erupted sporadically across China over Covid restrictions. In May, hundreds of workers clashed with security personnel at Quanta Computer Inc.’s factory in Shanghai after they were barred for months from contact with the outside world, while protests have emerged in locked-down areas of Guangdong, the southern manufacturing hub.

The Foxconn situation serves up another reminder of the dangers for Apple of relying on a vast production machine centered on China at a time of unpredictable policy and uncertain trade relations.

Zhengzhou is the site of Apple’s most critical production, churning out an estimated four in five of its latest-generation handsets and the vast majority of the highest-end iPhone 14 Pro units. Apple warned this month that shipments of its newest premium iPhones will be lower than previously expected — just ahead of the peak holiday season shopping.

The sprawling compound has operated for weeks within a “closed loop,” or a self-contained bubble that limits contact with the outside world. That is keeping some production going. Apple and Foxconn have said they’re working to replace staff who’ve left and resume full production as soon as possible.

The protests took place just hours after Henan party chief Lou Yangsheng visited the area where Foxconn plants were located and held a video chat with select employees. He asked managers to aid staff and ensure a “warm, relaxed and stable” living and working environment, according to the official Henan Daily. Lou’s visit underscored the unusual amount of effort that provincial officials had devoted in recent weeks toward the nation’s biggest private-sector employer, from reportedly helping in recruitment to exhorting retirees to work at Foxconn.

“The tension is that Beijing wants both Covid Zero and full economic growth,” he said. “It’s kind of impossible.”