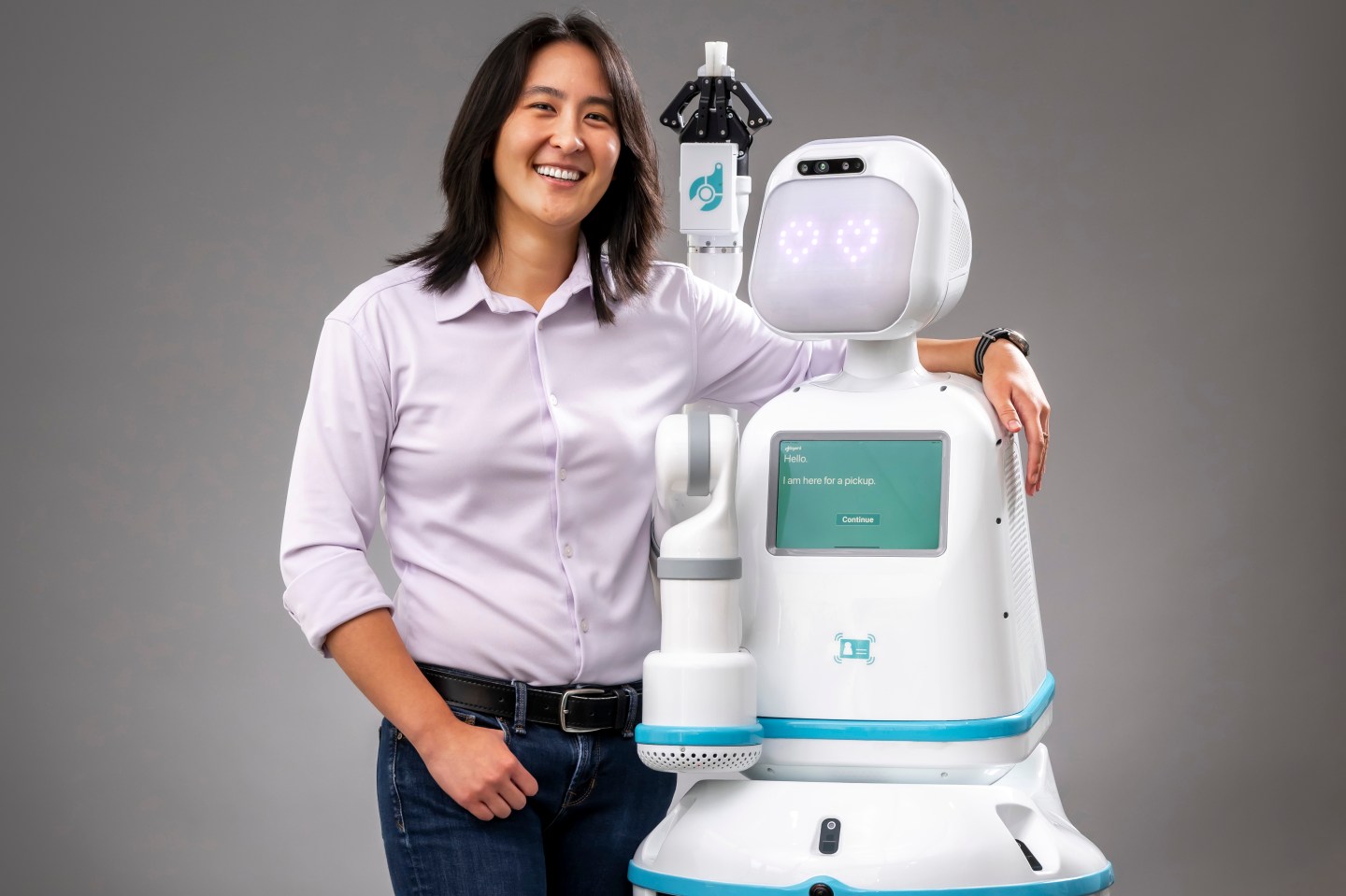 Vivian Chu was born into engineering—sort of. Her parents were software engineers, though their daughter was not captivated by ones and zeroes on a screen. It wasn’t until she attended University of California, Berkeley for undergrad and started messing around with moving parts that she got hooked on the family business.

“That was the moment where I was like, ‘This makes sense; you can actually have technology change the environment.’ That’s sort of the beginning of robotics for me, and from there I couldn’t get enough of it,” says Chu. Today the 35-year-old is the co-founder and chief technology officer at Diligent Robotics—and an honoree on Fortune‘s 2022 40 Under 40 list.

Austin-based Diligent—which Chu co-founded in 2016 with her Georgia Tech doctoral supervisor Andrea Thomaz—has created a robot called Moxi that is being rolled out in American hospitals such as L.A.’s prestigious Cedars-Sinai and the Shannon Medical Center in San Angelo, Texas. Moxi is essentially a helper for staff nurses, performing logistical tasks such as fetching drugs and delivering lab samples. Its assistance lets human professionals keep their attention focused on their human patients. The humanoid, glossy-white Moxi embodies Chu’s research specialty: robot-human interaction, including communication, the transfer of knowledge, and ultimately the ability of robots to “reason” about what they do and learn from their environments.

“For me it was wanting to always think about, where should robots be? Where can they have the most impact?” Chu says of her path into health care robotics. “Also just personal experience: watching my grandparents age and having to go to a nursing home, watching my parents be stressed about that, and thinking about ways we can have technology help people age gracefully and maintain their sense of self.”

It’s certainly a growth business. The care robotics market that was worth $100 million in 2020 is expected to grow 42% annually to reach $4.1 billion in 2030, says Jemima Walker, a thematic analyst at GlobalData, who names Diligent alongside the likes of Zora Robotics, Omnicell and Focal Meditech as leaders in the field. “As health care systems struggle with both aging populations and staff shortages, health care providers will increasingly invest in any technology that can help ease the burden,” she says.

As of a Series B round that closed in April—with Tiger Global Management as the lead investor—Diligent has raised around $47 million. According to Pitchbook, the company was valued at $112 million after that round.

Logistical tasks drag on the workloads and schedules of nurses, according to numerous studies. Chu and Thomaz saw the burden for themselves when they founded Diligent and began shadowing nurses to gauge their needs.

“We see nurses barely have time to get a coffee or eat lunch, and so the goal really is to give them time to spend more time with their patients or just have a moment to breathe, just so they can continue and not burn out. That’s really the challenge,” Chu says. “The goal [of Moxi] is to focus on the things that no people should be doing to begin with, which is I think what a lot of robotics is focused on today.”

Moxi talks to nurses in a squeaky voice, waves to patients, and knows how to use an elevator. The A.I.-powered robot has large, blinking “eyes” that can turn into hearts. There’s a touchscreen on its chest and a large drawer where a stomach would be. It can pick items off the shelves of the hospital gift shop and bring them to patients in their rooms.

But where could Moxi and its successors (Moxi is itself a friendlier-looking, upgraded version of a robot named Poli) go from here? In the future, care robots will “act more as companions than as tools or helpers,” Walker says. But according to Chu, Moxi will stay in its lane.

“We tell staff all the time that we draw the line at the patient room, because we want them to spend their time with the patient and have that human interaction,” Chu says. “That’s not to say that eventually [there couldn’t] be interesting ways to have robots maybe help with some of the other tasks, but not necessarily with health care or health facing—maybe we should deliver some water or snacks to the patient room. We already see that Moxi brings a little bit of joy to patients by coming. Nurses will request Moxi: ‘Moxi, go outside the patient room and wave.’”

Even while keeping Moxi outside patients’ quarters, there is plenty of room for development. At the moment, nurses need to request Moxi when they want it, but Chu says Diligent is looking at integrating medical records and admission data into the system, so the robot can more proactively move items around and “things just appear in the hospital where they need to appear.”

Chu has already garnered several academic and professional accolades: she was a Google Anita Borg Memorial Scholar and a Stanford EECS Rising Star, and is a regular keynote speaker at robotics conferences. Apart from her spot in Fortune’s 40 Under 40, she also landed on MIT Technology Review’s 35 Innovators Under 35 in 2019.

The engineer attributes some of that success to her experience as a lesbian of color. “I feel like just having a different background from other startup founders has given me a lot of grit,” she says, adding that diversity is key at Diligent.

“To build a health care robotics company, you need robotics knowledge, health care knowledge, operational knowledge, to get robots out in the field. We have nurses and clinical staff at the company. Everyone has a really fascinating background and that just makes us better and stronger, building better products,” she says. “For me that’s been incredibly exciting, and I hope my journey can help inspire others to also lean into that and be able to build amazing things.”

Vivian Chu is on Fortune’s annual 40 Under 40 list in the Tech and Innovation category.