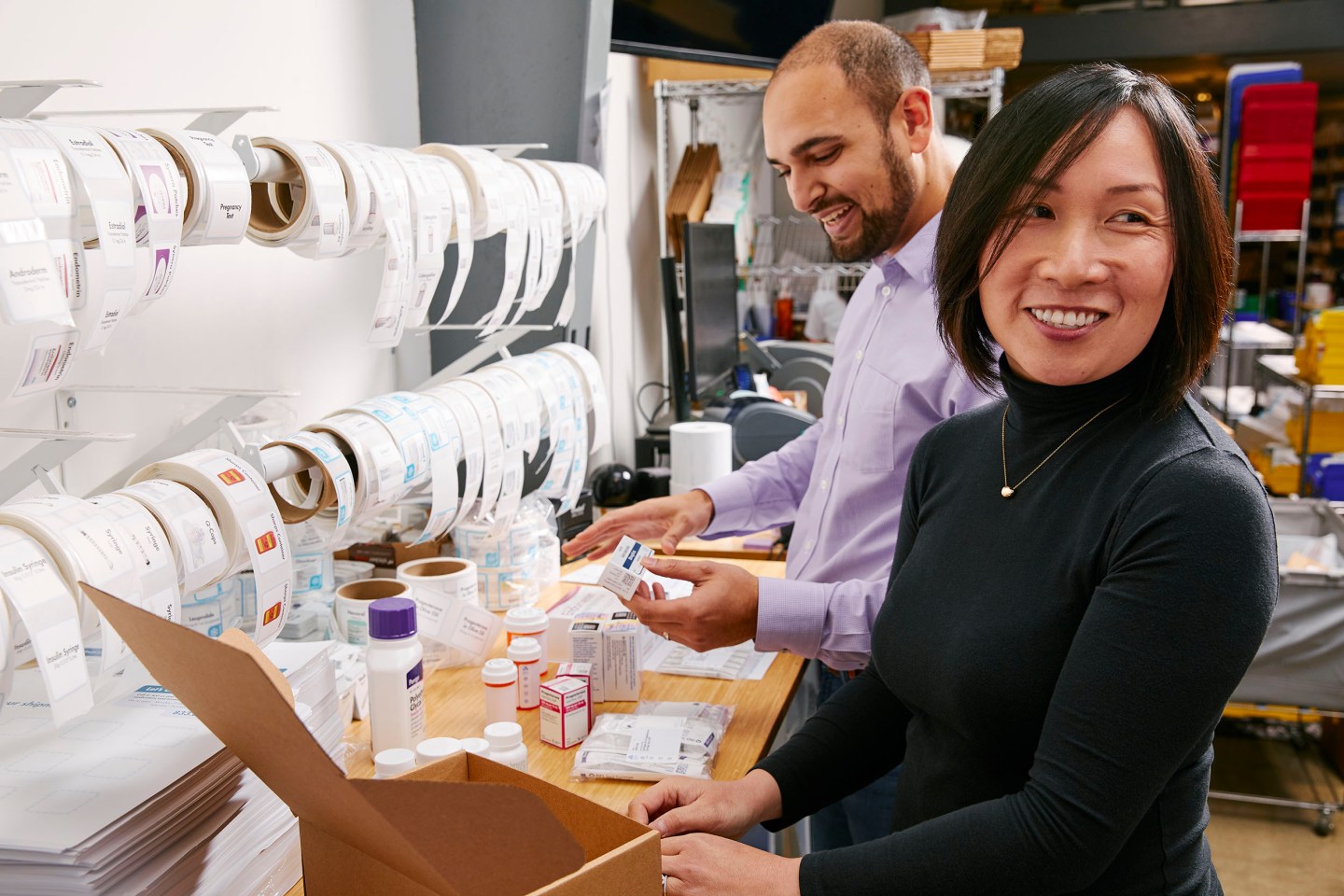 For years, the $500 billion prescription drug industry has loomed as an enticing target for disruption-minded entrepreneurs and corporations alike. The business of getting meds to patients involves a mess of different players, often with incompatible systems and technology sometimes no more sophisticated than a fax machine. For aspiring reformers, the question is: How could they not succeed in making the experience more efficient, transparent, and consumer-friendly?

Those ambitions have inspired players as varied as Amazon, Shark Tank billionaire Mark Cuban, and scads of digital pharmacies, which collectively have raised billions in venture capital funding in recent years. What’s at stake, of course, beyond a piece of that $500 billion pie, is a way to meaningfully impact the health of millions of Americans who, overcome by cost, confusion, or inconvenience, often forgo their medications. The Centers for Disease Control and Prevention estimates that 20% of prescriptions are never filled and 50% are not taken correctly. Those circumstances contribute to poor health outcomes—driving the $100 billion to $300 billion in annual U.S. health care spending that goes directly towards what the CDC calls “costs associated with non-adherence.”

It’s a worthy pursuit, and Fortune featured one of these start-ups, the fast-growing, California-based Alto Pharmacy, on its Change the World list earlier this month. Though it’s not alone in its mission to build a business around better serving pharmacy patients, Alto stands apart in its trajectory—the company already hit $1 billion in revenue this year—and in the bold-faced names it has drawn to its cause. Softbank led the company’s most recent $200 million round of fundraising. And Alicia Boler Davis, a 25-year veteran of General Motors and high-profile S-Team executive at Amazon (where she headed fulfillment), recently became the company’s CEO.

Among those on Alto’s advisory board is Adam Fein, CEO of the Drug Channels Institute and a leading expert on the prescription drug ecosystem. “They’ve grown at a truly breathtaking pace,” Fein says of Alto. Fein says he’s generally skeptical of the word “disruption” being applied to the pharmacy space—dominated as it is by a few giant, vertically integrated companies like CVS. But he says of Alto’s founders, “Their vision of what they’re trying to do is really solid. They have the right idea in terms of connecting with the prescribers, connecting with the patients, using technology to be more efficient, and adding a new dispensing infrastructure. I think that brings together some powerful elements.”

Alto’s origin story starts with a somewhat familiar script. Two Facebook engineers, Jamie Karraker and Mattieu Gamache-Asselin, wanted to do more for the world with their tech skills. They aimed to make a meaningful difference for people, rather than just “making life 1% easier for the 1%,” recalled Karraker, who came to Silicon Valley by way of West Virginia, and MIT, where he studied computer science and physics and captained the basketball team.

In 2015, they decided on pharmacy, since prescription drugs struck them as health care’s closest thing to a consumer product. Looking at the industry’s customer experience ratings—its net promoter score hovers around minus ten, said Karraker—and the demands it routinely put on patients, it seemed like a good target. “As newbies to this industry, it seems so simple, just make it ecommerce and you’re done,” said Karraker.

But as Karraker notes, the founders also realized that there was probably a good reason why ecommerce hadn’t yet transformed the industry. To learn more, he and Gamache-Asselin decided they needed to approach the problem “inside out”—actually operating in the brick-and-mortar environment they were trying to disrupt—and so they bought an independent-owned, half-century-old pharmacy in San Francisco’s Mission District. There they sponged up the insights that came with watching people who knew what they were doing.  (Alto retained the longtime staff, most of whom the company says still work there today.)

The duo were stunned by the number of faxes and phone calls that went back and forth over prescriptions, and they quickly realized the pharmacy business involved nothing like straightforward transactions, but a complicated, messy, multi-party process. “You have a different person choosing the product, paying for the product, and getting the product,” said Karraker. “Someone has to coordinate between all these parties to make the transaction happen, but no one really was managing that coordination,” he adds, noting that pharmacy staff don’t have the time or tools to do so. (The industry’s low margins cement that reality.)

Instead that difficult coordination work typically falls to patients—and in many cases, because it’s confusing and complex, it simply doesn’t get done. Alto’s goal became relieving patients of that burden, developing technology that automates all the backend coordination between physicians, pharmacy benefit managers (PBMs, which act on behalf of insurers), and sometimes manufacturers—from handling prior authorizations to finding coupons that may lower the prescription price to sending the meds out for same-day delivery.  All patients need to do after seeing their doctor is interface with the app (or via text) and pick up the prescription from their front door. Online reviews for the company tend to be exuberant; Alto says its most recent NPS score is 86.

In some ways, Alto’s service was developed as much for prescribing physicians as it is for patients. The company has made no big consumer marketing push, because it doesn’t need to—its customers come through doctors who use Alto’s free software. Because Alto’s platform lightens the load for physician practices—one study estimates physicians spend four hours per week, and nurses 15, on pharmacy workflows (admin staff spend many more)—and removes barriers for patients getting their medications, those practices are eager to recommend the pharmacy to their patients, said Karraker.

Beyond being spared the back and forth over prescriptions, Alto’s software offers its provider partners—like OneMedical and Stanford Health Care—more insight into their patients; physicians can see that patients have gotten their meds and whether they’ve communicated with Alto pharmacists. Speaking at The Information’s conference in October, Boler Davis said this data helps prove the value of the platform. “We think we’ll get better [health] outcomes through better adherence,” she said, and she suggested that the platform’s analytics will eventually be useful to insurers and other stakeholders as well.

Of course, while Alto’s software can show that patients have received their medications, it can’t know whether patients have actually taken them. Nor is the company’s technology so seamless that it integrates into a physician’s electronic health record system; instead, it’s a separate standalone system. Boler Davis also acknowledged that while the company tries to get everyone on its software platform, Alto still sometimes receives prescriptions “the traditional way”—electronically, and even occasionally by fax.

There are also signs, among consumers’ mostly glowing reviews, that Alto’s patient-first focus has been tested by rapid expansion. Unsatisfied customers in New York and Texas have griped that their meds were delivered to the wrong place, or arrived hours or days late. A number of those complaints were logged this spring, months into Alto’s $2 million contract with New York City to be the primary distributor of Paxlovid: Amid an Omicron surge, the company, per reporting by news channel NY1 and a number of Yelp posters, struggled to deliver the time-sensitive prescriptions quickly.

In an emailed statement, Alto said it was proud of its partnership with New York City in the fight against COVID, having served nearly 50,000 people to date, noting “We struggled momentarily to keep up with spikes in cases, but we have since used those learnings to improve both our forecasting and capacity.” The company noted broadly that “complaints are a tiny fraction of the millions of prescriptions we’ve delivered,” and that they take each one seriously.

Alto, which is growing fast but not yet profitable, is also still working out the finer points of its business model. It makes money, like other pharmacies, off the margins in selling prescription drugs. Karraker said because of Alto’s automated processes and light physical footprint—it has 13 distribution centers within reach of 20% the U.S. population—it makes more per unit than the average retail pharmacy. It’s also finding places where it can trim costs from its evolving business. In June, the company laid off 9% of its workforce, “mainly in roles focused on back-office function where we have learned how to be a leaner, more efficient team,” according to the company. Alto says it continues to hire aggressively to fill front-line roles.

Indeed, that’s an advantage the big players don’t have. Fein notes that the broader pharmacy industry is currently reckoning with its excess physical footprint—he estimates that country needs 25% fewer retail pharmacies—which adds costs for Alto’s rivals in the increasingly low-margin industry. On the other hand, Alto, as an independent pharmacy, is trying to grow within a notoriously hostile landscape. The Federal Trade Commission is currently investigating the PBM industry—some PBMs, like CVS, compete in the pharmacy space— for unfair practices directed at independent pharmacies, which have little leverage in contract negotiations with PBMs.

Boler Davis hints at additional ways Alto may make money in the future, but two weeks into the job, at The Information conference, she summed up the business model this way: “We’re making money based on eliminating waste, and friction, and time in the current process.” That gives the company plenty to do, as she also noted: “Look, I’m two weeks into the job, so I’m not an expert, but I will tell you there’s a lot of waste and inefficiency in the whole value chain.”