Dirty shrimp farms are punching a huge hole in the environment. A.I. could cut it in half 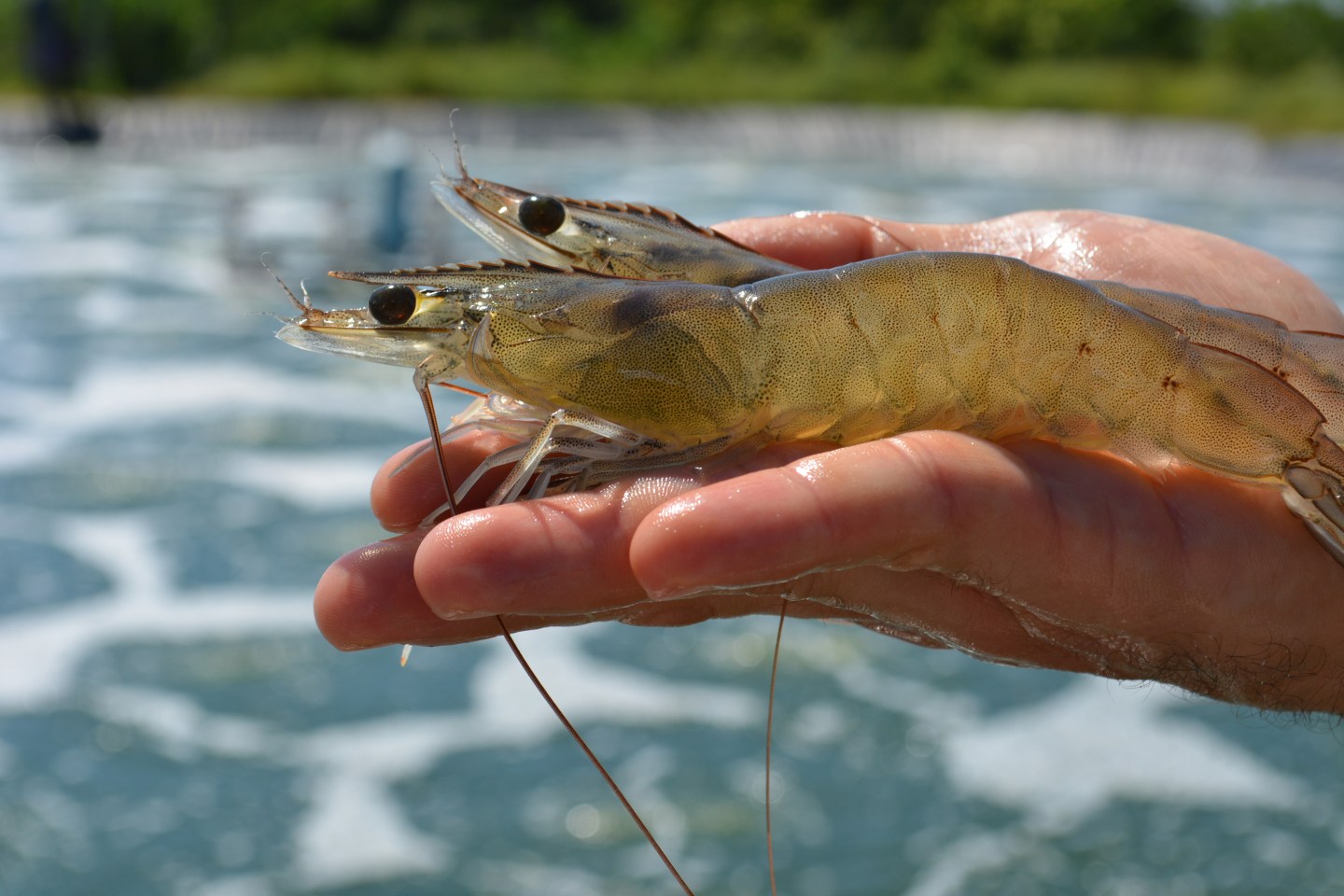 Shrimp produced with biofloc tech in Atarraya’s Shrimpbox could help meet the growing demand for seafood in a more sustainable way.
Courtesy of Atarraya

Inside a humid warehouse in suburban Indianapolis, a company called Atarraya is using large metal containers and the latest technology to grow shrimp hundreds of miles from the ocean. At one end of the hangar-like building sit blue metal boxes that look similar to shipping containers. But instead of holding cargo for transport, they’re designed to grow Pacific whiteleg shrimp anywhere in the world, overseen by employees who don’t require specialized training.

“The software does all the heavy lifting,” Daniel Russek, CEO of Mexico City– and Indianapolis-based Atarraya, tells Fortune during a tour of the company’s newly launched U.S. operation, which includes a small office building and a warehouse that it plans to fill with 20 of the micro shrimp farms. The software Russek refers to is cloud-based artificial intelligence that monitors water quality, regulates temperature and oxygenation, and feeds the shrimp. For Russek, the concept is a bet that Atarraya will be able not only to sell locally grown seafood itself but also to franchise its Shrimpbox technology to seafood distributors or farmers, whether they have aquaculture experience or not.

When paired with renewable energy, this technology-powered, distributed seafood model could help reduce greenhouse gas emissions, especially as global demand for seafood rises. The Food and Agriculture Organization of the United Nations estimates that global per capita consumption of wild-caught and farmed aquatic animals will increase to 47 pounds annually in 2030 from 45 pounds in 2020, a year when global aquaculture production hit a record of 122.6 million metric tons.

For aquaculture to support this growth but also help the world reach net-zero emissions, it will have to go increasingly high-tech.

Even low-tech aquaculture is generally better for the environment than raising other protein such as beef, largely because aquatic animals reproduce in greater numbers and are more efficient in turning feed into protein that humans can consume. But seafood farming isn’t blameless, and the industry remains ripe for decarbonization.

Most of today’s shrimp is produced at coastal farms, which, between 1980 and 2000, wiped out more than 3 million acres of mangrove forest. Although the rate of loss has slowed amid conservation efforts, fewer forests to clear in aquaculture hotspots, and more accurate monitoring, any removal diminishes one of the planet’s best carbon sinks. These farms also discharge chemicals and antibiotics into ocean habitats.

Meanwhile, wild-caught shrimp are just as problematic. Gathered by trawlers that emit carbon from their diesel-burning engines, they disturb the earth’s largest store of organic carbon each time their nets drag across seabed sediments. Beyond shrimp, the aquaculture industry raises finfish such as salmon in large net pens in coastal waters. While net pens are a relatively low source of carbon emissions, they’ve been linked to water pollution from fish feces and leftover feed.

The main emissions problem for farmed seafood comes from its reliance on the carbon Achilles’ heel of the aquaculture industry: feed.

“If we dig down and take a look at where aquaculture’s emissions come from, well over half originate from the production, distribution, and wastage of feed, including crops and fish meal,” says Jack Ellis, who leads the agriculture and food practice at Cleantech Group, a sustainability research and consulting company.

The crops in question are soybean plants, which are mostly grown to feed animals such as chickens and pigs. Land-hungry soy farms have contributed to the reduction of another key global carbon sink—the Amazon rain forest. Growing soybeans as a monoculture depletes the soil at greater rates than other farming methods, increasing the need for fertilizer, which is often made with natural gas.

Capital investments will be required to boost some of this tech that is going to reform the way protein is produced.

An alternative is fish meal, a powdered protein concentrate made from wild-caught fish that are often small, bony, and not considered fit for direct human consumption. Although this type of feed creates lower emissions than plant-based fish food, it still has drawbacks from a sustainability standpoint. Fish that are turned into feed are caught, transported, and processed using diesel-powered vessels and energy-intensive machines that crush the catch into powder.

Companies are developing technologies to help the fish feed industry produce fewer emissions. One, Volare, uses automation to produce feed made with soldier fly larvae and food industry waste. It claims its process has just 1/45th the greenhouse gas footprint of soy.

Atarraya’s Shrimpbox technology takes feed efficiency to another level. It combines A.I.-powered automation with a farming method commercially introduced in the 1980s that accelerates the growth of microorganisms beneficial to shrimp—enabling the micro shrimp farms to use proportionally less feed than traditional coastal ponds.

For Russek, it represents the distillation of years of work spanning old and new methods of shrimp farming that has taken the 39-year-old entrepreneur from the shores of the Mexican state of Oaxaca to an industrial zone next to a neighborhood in America’s heartland. His journey with shrimp farming had a stormy start when he was an economics student in Mexico. During a trip to the coast to deliver aid supplies after a hurricane, he was moved by local poverty. After college, he founded a nonprofit organization to develop economic opportunities for the African-Mexican communities in the area.

The local wild-caught fisheries were being overexploited, with fishermen having to take their boats out three times a day to catch the same amount that their grandfathers could with twice-weekly trips. So he and the locals turned to aquaculture. The equipment that improved harvests “gave them a bigger spoon for the same size pie,” he said.

After scrapping an early idea for a traditional shrimp farm out of concern for mangroves—which, in addition to storing carbon, offer protection against hurricanes—he built a commercial-size shrimp farm with ponds that use the same biotechnology as what would later be incorporated in Atarraya’s Shrimpbox.

Called biofloc, the technology involves encouraging growth of beneficial algae, bacteria, and fungi that make shrimp farms more productive while using less feed and water, avoiding antibiotics, and not emitting waste into the ocean. But this kind of farming also requires managing many variables, and in 2019 Russek founded Atarraya as a way to use technology to help streamline that process and bring fresh shrimp that hasn’t been frozen closer to end markets.

With the expansion of environmental, social, and governance (ESG) concerns among the investor community, agricultural (or ag) tech that helps reduce emissions has become an attractive sector. Last year, venture capital firms invested nearly $40 billion in food tech companies, according to PitchBook.

In addition to Atarraya, Singapore-based Vertical Oceans and Royal Caridea in Arizona also have business models based on distributed container shrimp-farming that leverages technology. Others are working on similar land-based systems for finfish. Investors are showing more interest in such companies as tech improvements reduce the risk of animal disease and provide a clearer picture of the input costs and production volumes.

More money is an important driver of innovation. “Capital investments will be required to boost some of this tech that is going to reform the way protein is produced,” says Chris Rawley, CEO of Harvest Returns, an investing platform that helps agriculture and seafood companies raise money.

With its $100 million oceans and seafood strategy, S2G Ventures, a food and agriculture venture fund, is among the investors wading into the waters of onshore salmon farming. One of the fund’s investments is in ReelData, a company developing artificial intelligence to provide data and automation to monitor feeding health, biomass, and stress in land-based fish farms.

Because of the energy needed to power indoor finfish and shrimp farms, these systems will have to be paired with renewable-sourced electricity for meaningful energy savings. Biogas made from fish waste can offset some of the energy needs of land-based aquaculture systems, and local solar panels or a renewable-powered grid are options to help make up the difference.

A 2020 study in the journal Scientific Reports showed that global aquaculture accounted for less than 0.5% of human-caused greenhouse gas emissions in 2017. But putting a precise number on how much of that could be reduced if all traditional aquatic farming went high-tech is difficult, in part because of the variety of farmed species and methods employed.

“At this stage, that’s still an open question,” says Rosamond Naylor, founding director of the Stanford Center on Food Security and the Environment. “Aquaculture systems are incredibly diverse—whether you are considering marine versus freshwater, energy sources or feed.”

Shifting away from land-based livestock to protein from next-generation aquaculture, including sea-plant farming, could cut in half the estimated 21% to 37% of global greenhouse gas emissions currently generated by food production, Wasserman says.

Volare CEO Tuure Parviainen offers his own estimate: Replacing all protein sources in aquaculture feeds with novel feeds, such as Volare’s protein, would save 20% to 39% of the total emissions arising from aquaculture.

At the moment, Atarraya is working with a university on a study to quantify how much carbon a Shrimpbox could save. Russek is confident the numbers will show the farming method has a favorable emissions footprint, citing a 2021 study in the journal Nature that showed seabed trawling for shrimp and other seafood species releases as much carbon dioxide as the aviation industry.

“It’s kind of easy to outcompete that,” he notes.