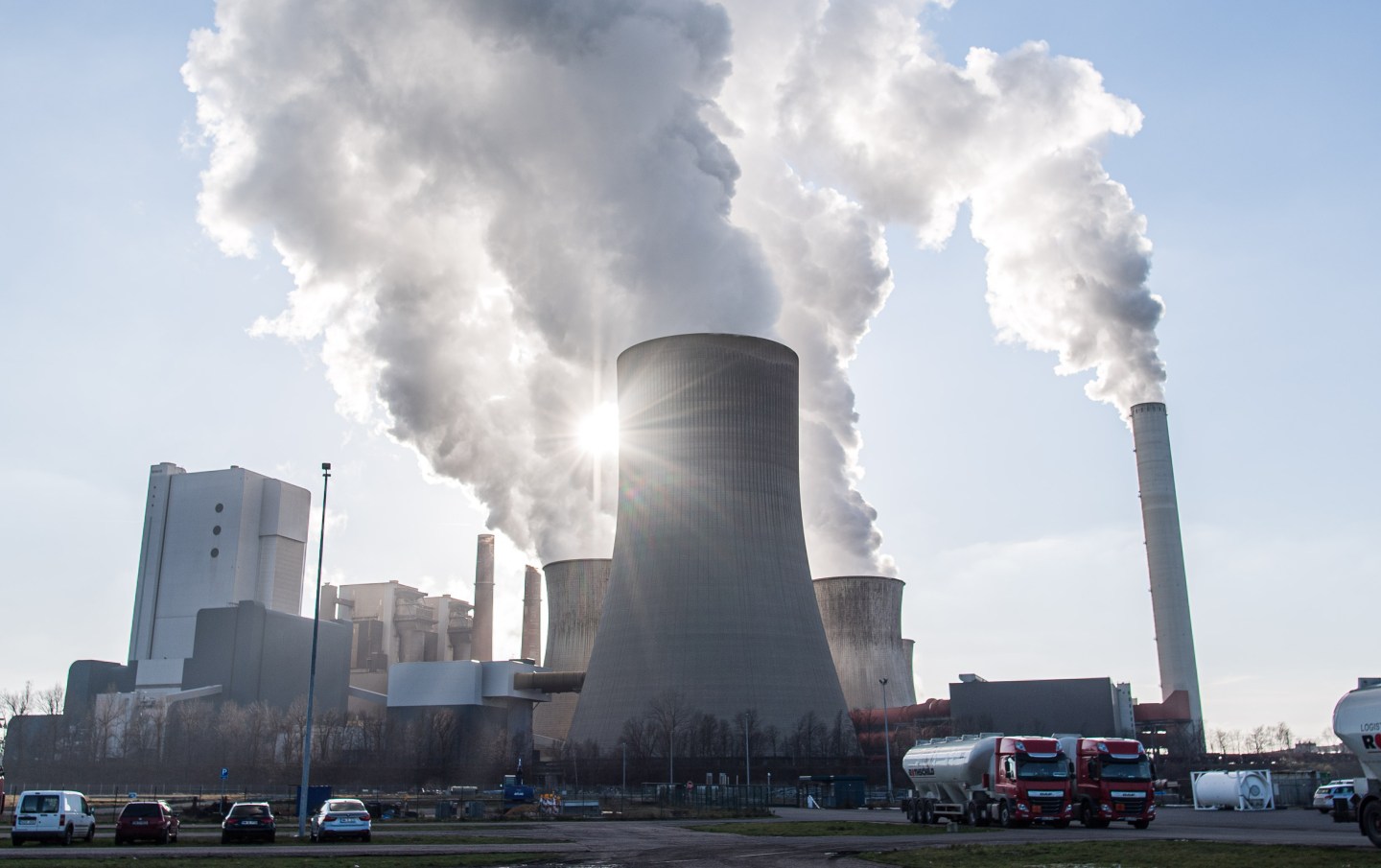 An energy crisis the likes of which hasn’t been seen in decades is unfolding around the world.

The Russian invasion of Ukraine in February of this year created a ripple effect in global markets. Western nations that once relied on energy supplies from Russia—the world’s second largest natural gas producer and third largest petroleum producer—condemned the invasion by refusing to buy Russian energy, or were cut off by President Vladimir Putin.

Nowhere is this crisis more pronounced and more dangerous than in Europe, where a long-standing gambit on cheap Russian gas has backfired. At the onset of the war, the European Union’s 27 member nations relied on Russia for 40% of their natural gas—the second most common energy source in Europe behind petroleum oil.

But now, with Russian supplies limited, the benchmark price of natural gas in Europe has more than doubled over the past year, and both consumers and corporations are getting hit hard.

Electricity bills have already tripled in many places. Some coffee shops and restaurants have seen monthly bills rise from €2,000 a year ago to €7,000 now, and major industries have started furloughing workers and cutting back on expenses due to high electrical bills. The situation is so dire that governments that previously renounced fossil fuels and nuclear power are desperately reopening shuttered coal plants and nuclear sites, and nationalizing utility companies to save them from going bankrupt.

But as bad as it is now, these might still be the good days for Europe. With winter and higher gas demand on the way, experts told Fortune that Europe’s energy market has never been more vulnerable. Even the slightest uptick in energy demand anywhere in the world could push entire sectors of Europe’s manufacturing industry to shut down entirely, devastating European economies with a wave of unemployment, high prices, and in all likelihood public unrest and divisions between European nations.

“Prices are at historically record levels. We have never ever seen anything actually like this,” Tatiana Mitrova, a research fellow with Columbia University’s Center on Global Energy Policy, told Fortune. “This will become quite painful.”

Trying to prepare for a crisis

As soon as the war began in Ukraine, European nations scrambled to secure their energy systems against disruptions of natural gas supply from Russia. They had two options: increase supply of gas coming into the continent, or reduce the demand.

First, Europe turned to the supply side to resolve the mounting energy crisis by diversifying the countries that supply natural gas to the bloc, and reduce its reliance on Russian flows. EU countries looked to Qatar, the U.S., and central Asian nations to strike trade deals for both natural gas and LNG (liquified natural gas), a more easily transportable form of gas that can be shipped by sea rather than flowed through pipelines.

But trying to solve the crisis on the supply side comes with a catch: time. Increasing natural gas flows from countries other than Russia requires building more pipelines, while importing more LNG means constructing dedicated terminals in Europe that can regasify liquid gas, a process which can take anywhere from two to five years.

And there is only so much countries can do to shore up supplies in the short term. Expanding natural gas infrastructure is expensive, demands years of investment, and the results likely won’t kick in until the summer of next year, Penny Leake, a research analyst at energy consultancy Wood Mackenzie, told Fortune. Four other experts that Fortune spoke with said that until the summer of 2023 at least, suppliers are unlikely to be able to increase flows to Europe by a high enough volume to replace Russian gas.

With immediate supplies maxed out, Europe’s energy system is balanced on a ledge. That means that addressing demand is the only realistic measure left at Europe’s disposal. And that could come through painful means like mandated and widespread energy rationioning, according to Mitrova.

“I’m afraid that the only solution this winter will be on the demand side,” said Mitrova. “I think it will be quite difficult to avoid some sort of rationing and restrictions in gas demand.”

European countries including Germany, France, and Spain approved energy conservation measures this summer in an effort to increase gas reserves as much as possible before the weather turns colder.

But the stability of Europe’s gas reserves depend on a relatively mild winter, because if it gets cold enough, it could send demand soaring higher than Europe’s reserves can handle.

European governments have already implemented some energy conservation and rationing laws, such as turning off traffic lights at night and dimming lighting on historic buildings. They have stopped short of ordering consumers to lower their energy use, but with energy demand much higher during the winter, they may be forced to make some difficult choices.

“We should understand that we are choosing between different bad options, we do not have a good scenario at the moment,” Mitrova said.

Reducing gas demand in Europe either through rationing or high prices could have a prolonged and debilitating effect on Europe’s society, and it’s already having destabilizing consequences for some industries and economies.

Over 70% of European fertilizer producers—which rely on the ammonia extracted from natural gas production—have already halted operations, according to Mitrova, and soaring energy costs are forcing those European factories and manufacturers to slow down operations.

But the worst-case scenario would be a shutdown of European manufacturing industries most reliant on natural gas—including glassmakers and steel companies.

“A big thing that we will be seeing in the next few weeks, months, and into 2023, will be how this situation of sustained very high gas and electricity prices could impact industrial activity,” Mauro Chavez, research director of European gas at Wood Mackenzie, told Fortune, adding that many of these “more sensitive” industries may be forced to shut down soon because of energy prices.

Chavez added that so far, most European factories have only reduced their capacity, rather than shut down entirely. But industrial plants that rely on natural gas for electricity or are located in countries where gas plays a bigger role in the energy mix, could start shutting down soon because of unbearably high costs.

This week, Europe’s largest car company Volkswagen suggested that high electricity bills could lead the company to relocate its production capacity from countries that were highly-dependent on Russian gas—including Germany, the Czech Republic, and Slovakia—to southwestern European nations which have access to more diversified energy streams, including LNG terminals.

A new type of energy crisis

The crisis could not have come at a worse time for Europe, as the continent’s energy system is still recovering from a summer of extreme weather and worker strikes slowing operations. Combined with these challenges, this crunch could be one of the worst energy crises on the continent since the 1970s.

It already means high prices for average Europeans, companies cutting back on production, and a slowdown in the fertilizer industry. But if it forces all kinds of industries to shut down or relocate, experts say it could lead to a much longer wave of unemployment and economic downturn on the continent.

That kind of outcome could persist long after winter is over, experts say. Cutting back on industrial capacity could lead to “lower economic activity, higher levels of unemployment and even greater potential for recession,” Goldman Sachs senior energy strategist Samantha Dart wrote in a recent post, evoking memories of the rationing and unemployment that swept the continent during the 1970s oil crisis.

The prices of other energy sources—especially coal—have also risen over the past several months with higher global demand for them. And a summer of extreme weather and drought has crippled Europe’s nuclear and hydropower generation capacity, throwing its ability to compensate for Russian natural gas into doubt.

“Europe is now in a very challenging situation. I would say it is probably worse than the 1970s when there was just an oil crisis. Now we are talking about a crisis with oil, nuclear, hydropower, and gas,” Mitrova said.

Diversifying away from natural gas immediately after the war broke out was made easier by several other energy sources at Europe’s disposal, Ryhana Rasidi, gas analyst at energy consultancy Kpler, told Fortune. But with winter on the way, these alternative sources are beginning to show issues of their own.

In addition to supply shortfalls for natural gas, Europe will soon start feeling the effects of a ban on Russian oil, set to kick in from December onwards. And European countries that may not have been extremely reliant on natural gas are still feeling the sting of an energy crisis. France, long considered one of Europe’s more stable energy suppliers, generates around 70% of its energy from nuclear sources, but efforts to increase power capacity in preparation for the winter have so far been hindered by hot weather and worker strikes.

Combined with a renewable energy grid unprepared for the weight of this winter’s demands, Europe’s new energy crisis promises to be unique in all the worst ways, on every front.

The brunt of winter has yet to hit, but tensions are already starting to emerge, leaving politicians with some tough choices.

If the situation deteriorates, every European country is in for a “wild west scenario,” Fatih Birol, head of the watchdog International Energy Agency, warned this week in an interview with the FT.

Birol said the energy crisis could go one of two ways: “EU and members will work in solidarity, supporting each other…or there is another scenario, if everybody is for himself.”

And if rising electrical bills combine with a wave of unemployment and economic downturn, the crisis could spill out onto the streets.

“We can expect some protests,” Mitrova said, adding that Europe should anticipate movements similar to the Yellow Jacket protesters who emerged in France in 2018 protesting higher costs of living and electricity bills.

“European politicians have to prepare for a very difficult season,” she said.