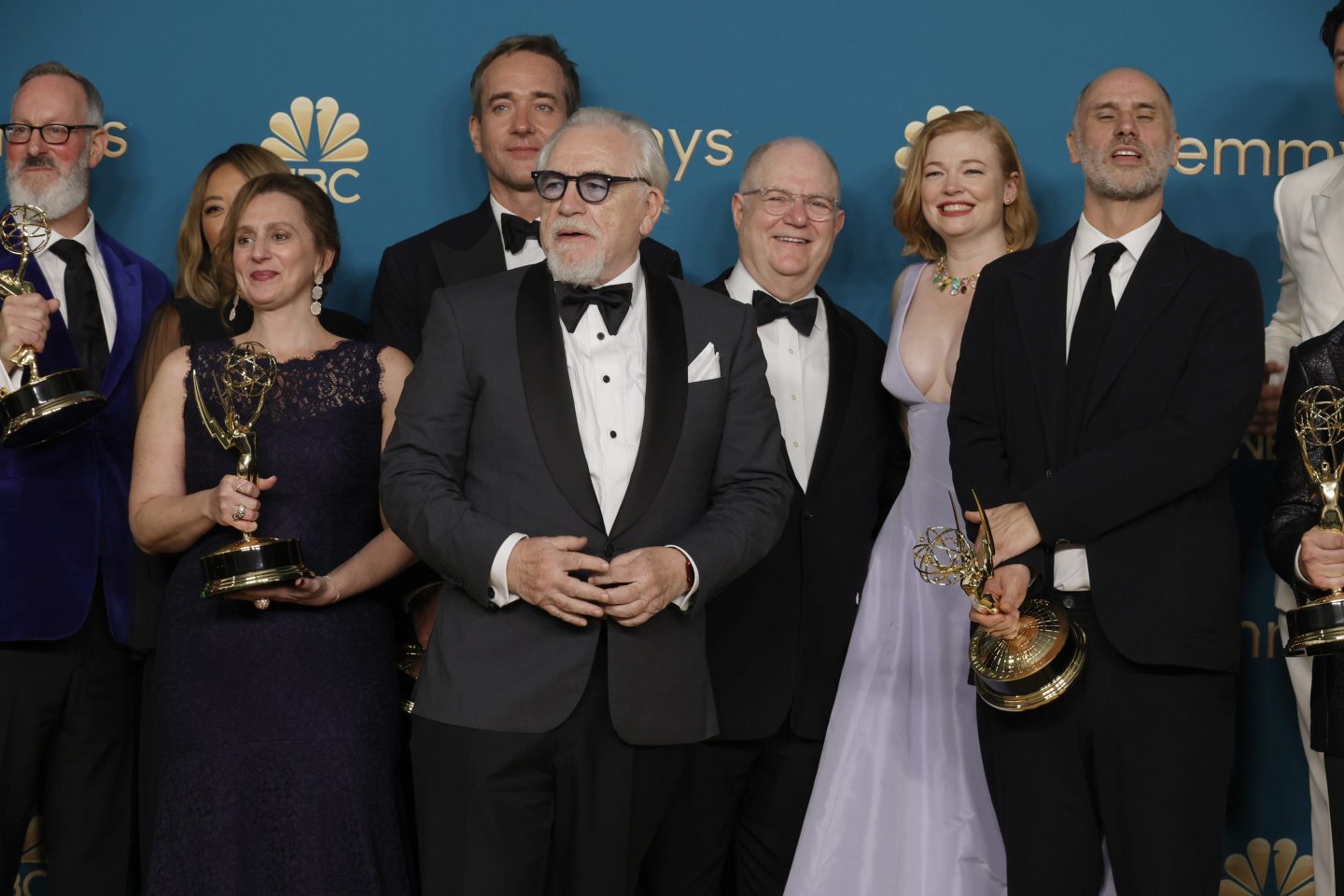 HBO took home the top Emmy Award for the sixth time in eight years on Monday night, dominating TV’s biggest night thanks to the darkly comic shows “Succession” and “The White Lotus.”

While more people tune in for the Oscars, which award the best movies of the year, the Emmys have become a focal point of the competition between the world’s largest media and technology companies as they seek to boost their new streaming services. Netflix Inc., for example, has spent tens of millions of dollars chasing awards that validate its shows in the eyes of viewers and talent.

Netflix and HBO led the field of nominees in 2022, as they have for the last six years. HBO, which earned more nominations than any network this year, has remained the gold standard among its peers, despite changing owners twice in the last decade. It won best drama series four times for “Game of Thrones” and now twice for “Succession.”

Created by Jesse Armstrong, “Succession” skewers the pettiness, privilege and fragile egos of the wealthy, in this case a family that owns a media empire and bears some resemblance to the real-life Murdoch and Redstone families.

Netflix’s recent subscriber losses have cast a pall over the entertainment industry this year. Companies spent billions of dollars to lure as many customers as they could to their new streaming services, only to have investors demand profits instead. Shares of all the major entertainment companies have declined this year.

“‘Squid Game’ is a contest you enter when you’re in massive debt and desperate for money. Joining the cast next season? Netflix,” Thompson joked at the start of the program, later adding that he would donate his salary for the night’s show to the company. The ceremony took place at the Microsoft Theater in Los Angeles and aired live on NBC and its sister Peacock streaming service.

Although the company won Emmys given out earlier in other categories, Netflix scored only three on Monday night. The debut season of its drama “Squid Game” won awards for directing and acting, the first TV series in a language other than English to win one of the top awards. It won six prizes in total, tied for the second-most of any show.

“I truly hope ‘Squid Game’ won’t be the last non-English series to be here at the Emmys,” creator Hwang Dong-hyuk said after receiving his award for directing.

The Emmys showcased the breadth and depth of programming on HBO and its affiliated streaming service, HBO Max. Comedies “Hacks” and “Barry” won multiple prizes, as did “Euphoria,” a drama about debaucherous teenagers. The show earned six awards, including best actress in a drama series for its star, Zendaya.

The biggest winner on the night was “White Lotus,” writer Mike White’s dramedy about the relationship between rich guests and hotel staff at a luxury resort in Hawaii. It cleaned up in the limited series categories, earning prizes for writing, directing and acting. The show won 10 prizes in total.

HBO continues to deliver award-winning programming as its new owner, Warner Bros. Discovery, is looking to cut costs across the company. Chief Executive Officer David Zaslav has pledged to keep funding HBO and earlier this year renewed the contract for Casey Bloys, the network’s head of programming. Yet Bloys did have to fire about 14% of his programming staff earlier this year. The company is reportedly going to fire more staffers Tuesday.

Best comedy series was the only one of the three top awards that HBO didn’t win Monday night. That prize went to Apple’s “Ted Lasso.” The tale of a US football coach taking command of a British soccer team has now won the prize two years in a row, an early validation of Apple’s entry into Hollywood. The tech giant also won best picture at the Oscars earlier this year for “Coda.” “Ted Lasso” earned four prizes Monday night, including for directing and star Jason Sudeikis.

Though the Emmys air most prominently on broadcast TV, the show has of late turned into a coronation of the best shows on premium cable networks and streaming services. “Abbott Elementary” and “Saturday Night Live” were the only shows that debuted on broadcast to win an award Monday night.

“Tonight we celebrate the hundreds and hundreds of shows that were produced this year, and then we give awards to about five of them,” Thompson said during his opening monologue.