Millennials want to live a ‘soft life,’ and it’s changing how they work 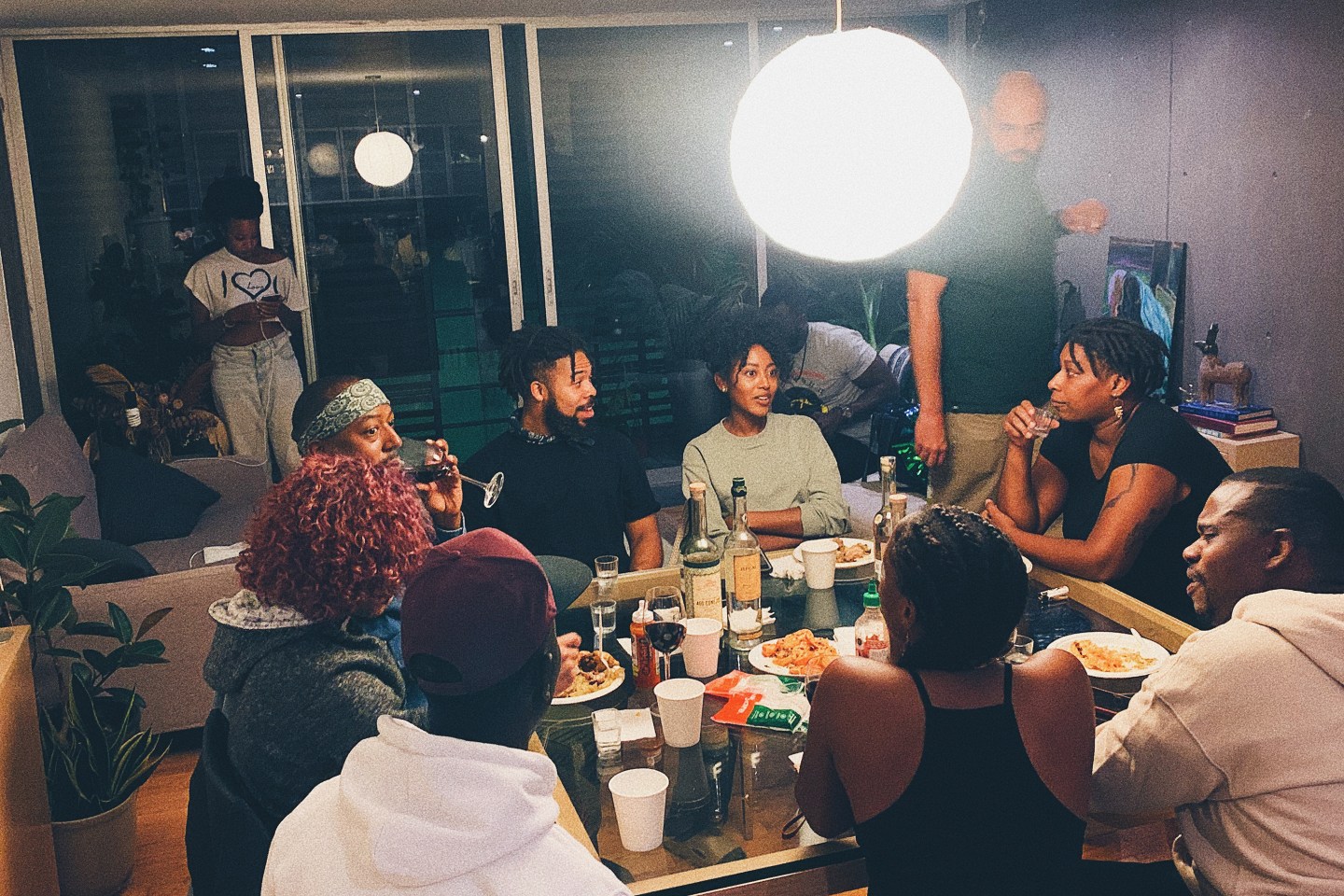 Dar LaBeach (center left) used his time during the pandemic to build community and commit to living a "soft life" rooted in ease and joy.
Courtesy of Dar LaBeach

Fortune wants to hear from you: What do you do when you’re procrastinating on work? Fill out this Google Form, or email Trey Williams at trey.williams@fortune.com.

There are some people who live to work. They relish being a hustler, grinding it out. They chortle at your nine-to-five regimen, and they can’t understand why anyone would be attracted to “quiet quitting.”

Then there are those who work only to live the life Instagram fabricates. They collect their paycheck and take it to Lisbon or Paris or Madrid, where they flood social media with images of all the experiences their hard-earned cash bought them.

But Dar LaBeach is part of a new ilk, who are out here just living to live.

Life has changed a lot in the last two years, and many people are embracing a so-called soft life—a rejection of the struggle, stress, and anxiety that come with working a traditional nine-to-five career and spinning away your days on life’s hamster wheel. Instead, living the soft life is about throwing yourself into joy, and prioritizing the richness of experiences.

In the midst of the pandemic, LaBeach was at a crossroads and decided it was time to make a dramatic change. After being laid off from his marketing job in New York City in spring 2021, he went to Mexico. He had been earning between $100,000 and $150,000 a year but was stressed, disenchanted, and tired of living for something other than himself.

“It was very much, ‘F- all this,'” LaBeach tells Fortune.

He lost his job on a Tuesday, booked a flight on Wednesday, and by the end of the week he was sitting on a beach in Oaxaca, Mexico. He needed a break, to breathe.

“It was while I was there that I realized I can really do this in a sustainable way,” LaBeach says. Do what? Be on a beach, frolic, just live. “I realized, ‘Wow, I don’t need to be in New York.’ I really leaned into the idea that if I need it, I’ll figure it out.”

LaBeach, 31, splits his time between New York and Mexico nowadays. He’s able to do so without spending more than $1,000 a month for rent in either city. When in Mexico he primarily rents places via Airbnb, and he shares an apartment with a roommate in Brooklyn.

He had some savings set aside when he opted to shift his focus away from work, and he received a severance package when he lost his job, though he says it was pretty insignificant. LaBeach says he doesn’t worry about money, and he admits that he’s only fortunate enough to live this way now because he opted in to capitalism for so long.

“Money comes and money goes, and when I need money, I’m able to book projects, work, et cetera, so I don’t let it stress me,” LaBeach says. Since losing his job in 2021, he’s developed a sort of work-at-will freelance career doing marketing and strategy consulting. “There are plenty of ways to make money, and I give myself credit for developing a diverse enough set of skills over the years in business, strategy, entertainment, service, travel, and more to make that happen.”

A shift away from traditional success

It takes having “an existential conversation” with yourself before reaching the point of pursuing a soft life, says New York University sociology professor Deirdre Royster. The pandemic fast-tracked a lot of those conversations, but life and what people value was shifting even before everything shut down.

The script for a “good American life,” for “the American Dream,” has been completely flipped, Royster says. No longer is it simply a family of four settling down in the suburbs with the tidy home and a white picket fence. Royster herself, a tenured professor at NYU, found herself pursuing a whim during the pandemic to follow her passion for interior design. She applied to the Pratt Institute and was granted a partial scholarship.

“In the ’80s people asked ‘How do we maximize?’ But now people are asking, ‘What’s the minimal amount I need to live a sustainable life?’ I love that idea,” Royster says.

LeBeach’s experience in those first months in Mexico, while he recovered from burnout and a life in service to his career, made a few things very clear to him: “Never again would I not take the trip, book the flight, eat the thing, because of money…Needing money is not going to interrupt my need to live life,” he says.

He’s like many Americans who used the pandemic as an opportunity to disrupt their lives. The collective trauma of this worldwide tragedy allowed some to pump the brakes, turn into the skid, and realize that perhaps there was something more important in their lives than the stressing over whether they were living for their job hard enough.

“Quiet quitting”—the internet’s favorite workforce term of the moment—its distant cousin, “lying flat,” and “soft life” have all popped up as symptoms of a shift away from the traditional expectations of what it looks like to be successful in America. Living a soft life doesn’t necessarily mean you don’t have a job, it just means your job is not your whole world.

For LaBeach, embracing the soft life has meant becoming a staunch anticapitalist, he says. When he moved to Mexico City, he got involved in local mutual aid. He says in connecting with his community there, he’s come to understand that “a lot of Black people are moving to Mexico City without realizing we’re gentrifiers.”

As the world initiates the pandemic’s soft closing, and people are finding new ways to return to life, Mexico City has become a haven for some Americans looking for a change while they take full advantage of the work-from-anywhere era. The Mexican government recorded more than 5.3 million Americans flying into Mexican airports from January to May 2022, CNN recently reported. That’s nearly a million more than the same period in 2019.

LaBeach looked around at all the people coming to Mexico from the U.S., Canada, the U.K., Brazil, and so on, and set out to form a new community of like-minded people. He and his friend and roommate Raven Rodriguez hosted dinners for Black and brown expats and immigrants. He helped to amplify protests and the voices of local activists advocating for women’s rights. Even if it was just his small community, he wanted to be sure they were getting involved.

The rise of the soft life

The term “soft life” really picked up some steam among Black women earlier this year. The cottage industry of advice, lifestyle hacks, and femininity within the YouTube vlogosphere is littered with videos like “How to live your best soft life,” “How I created a softer life for myself,” and “The truth about the ‘soft’ life.” All are geared toward Black women.

“I feel like I’ve stepped into my era of living a soft life,” creator Courtney Daniella Boateng says in a video about the hard work that goes into living a soft life. “I’ve really invested in slowing down and detaching my self-worth or my productivity from these ideas of high levels of stress and just struggle.”

But many of these creators are painting a very opulent picture of the #softlife: more a Sofia Coppola Marie Antoinette-era version.

“Soft life, in the way that it’s portrayed online, can often look like luxury and true levels of enjoyment,” says Boateng in the video. “However, there is a reality to living a soft life, which everyone in the real world needs to be exposed to, such as, you need to work, you need to make money. Life is not always roses.”

Friends and family often ask LaBeach how he affords to live the way he is. It’s not like he has a nest egg funding his life. He’s taken a “$10 in; $20 out” approach, he says, and it works for him. He’s booked commercials while living in Mexico—last year he appeared in a commercial FanDuel run during NFL games, and he even has a line—and that provides some extra income doing work he enjoys. He does his freelance while chilling on the beach, or even sitting in the stands at the U.S. Open.

“I have zero regrets,” he says. “Maybe I’ll go back [to a full-time job], and the only way I could at this point is because I know what it means to me to be in that space. I know I’m not there because I have to be… There are now stipulations and boundaries in place that allow me to live the life I want to live.”

Editor’s note: This story has been updated to reflect that LaBeach lost his job and moved to Mexico in 2021.