Before ‘quiet quitting’ in the U.S., there was ‘lying flat’ in China. How the anti-work movement swept the world’s two largest economies 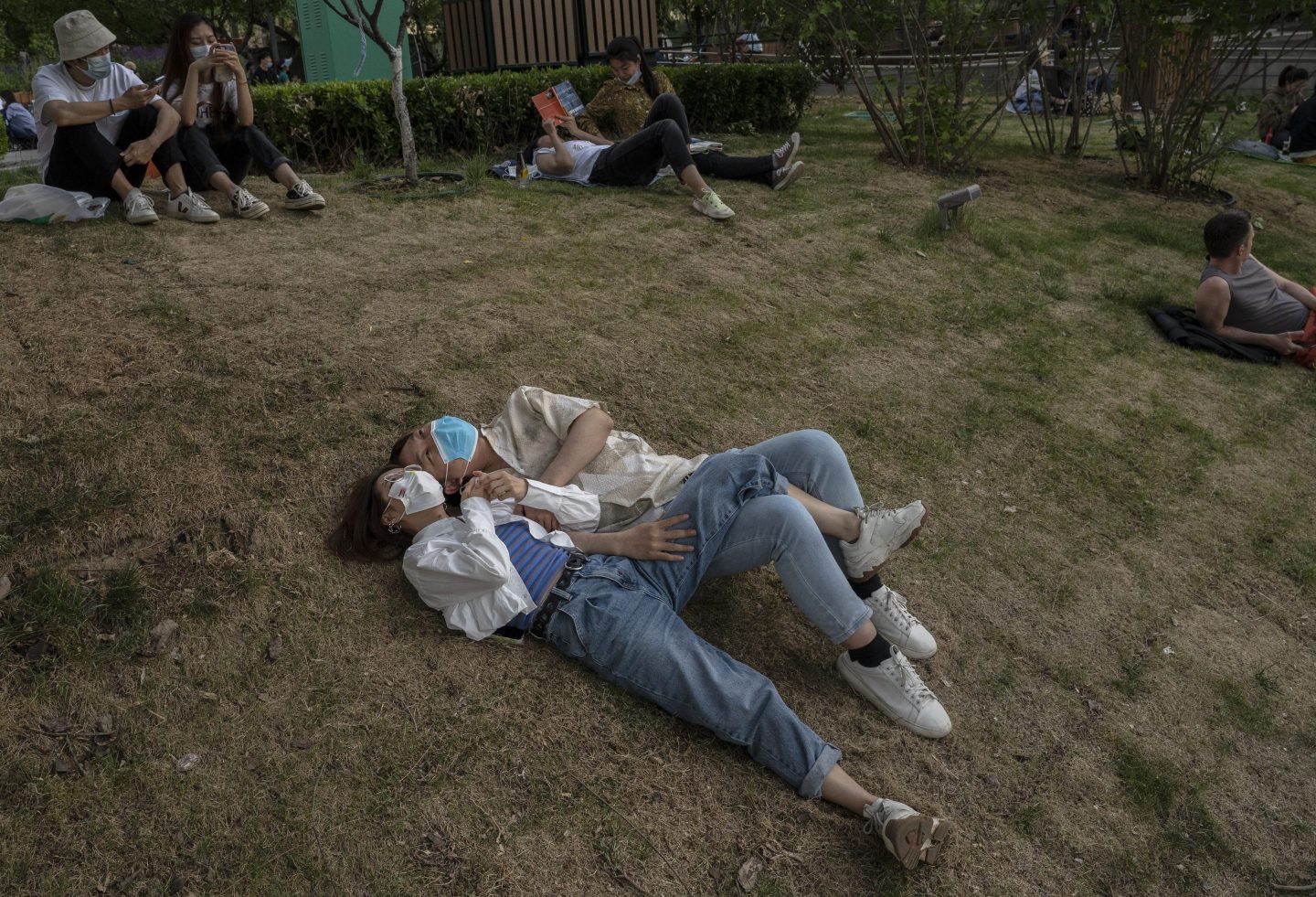 The “lying flat” trend in China, which advocates a minimalist lifestyle, predates “quiet quitting” in the U.S.
Kevin Frayer—Getty Images

Paige West and Luo Huazhong live thousands of miles apart in the U.S. and China, respectively. But last year they came to the same conclusion: The only way forward was to do the bare minimum.

West had recently graduated from college and had started work as a transportation analyst in Washington, D.C., a job and life she had always envisioned for herself.

“I was putting in my best effort, attending extra trainings, and considering joining organizations outside of work that would help boost my career,” says West, 24. “I wanted to climb up the corporate ranks forever.”

But West said that long hours and the pressure to perform at work began to make her anxious. She began losing sleep and feeling nauseated; her hair was falling out.

That’s when West “quiet quit” her job, a process that she describes as dropping out of the corporate rat race and doing just enough work to collect her paycheck. “I decided to just go to work for 40 hours a week. That’s it,” she says. After quietly quitting for a few months, West formally left her job last year and has since done freelance work and become a YouTube creator.

In 2016, Luo came to his own realization that a job would not fulfill him. Luo had been working in a factory in China’s central Sichuan province, which made him feel “numb, like a machine,” Luo, now in his thirties, told the New York Times last year. Luo quit his job and spent the next five years biking around China, doing odd jobs, and reading philosophy. He later called his lifestyle “lying flat,” and posted a “lying flat is justice” manifesto online in April 2021.

The post, which authorities have since scrubbed from China’s internet, included a photo of Luo lying down on his bed in a sparsely decorated room with drawn curtains. “Lying down is my philosophical movement. Only through lying down flat can humans become the measure of all things,” he wrote.

Luo’s post went viral last spring, inspiring hundreds if not thousands of others to post lying flat memes and pursue lying flat lifestyles; they put in less effort at work or quit altogether; they bucked societal expectations to get married and have kids; they refused to buy homes or consume other material goods.

A world apart, “lying flat” and “quiet quitting” have sprouted parallel passive resistance movements among young people in the world’s top two economies, flouting assumptions that Gen Z will work just as hard as previous generations. Individual followers of the movements have their own motivations—from pandemic-era burnout to existential dread—but a shared sense economic defeatism is binding them together as they confront critics and defy workaholic cultures in China and the U.S.

What is quiet quitting?

The exact origins of quiet quitting are unclear, but the phenomenon took off on social media earlier this month after one TikTok user named Zaid Kahn posted a viral video explaining the practice.

West, who posted about quiet quitting as early as April, attributes her own quiet quitting experience to the pandemic. She started her job in July 2020, a few months after COVID-19 reached the U.S. and many workers were forced to work from home.

Normally, she says she would have traveled with her colleagues to new cities and attended conferences, dinners, and other events. But early in the pandemic, all she did was work with none of the additional benefits. “I realized it really wasn’t something I enjoyed doing,” she says.

West says that her work stress faded the moment she decided to quietly quit. She found fulfillment in pursuing hobbies and interests, like her YouTube channel, after wrapping up her nine-to-five. Unexpectedly, she drew more praise from her colleagues after she quietly quit, which she attributes to scaling back her check-ins with coworkers and concentrating her effort on fewer tasks.

Others should consider quietly quitting, she says, but only if they’re doing it for the right reasons.

“Consider why you are [quietly quitting] and make sure that you’re doing it so that you can put more effort into the things that are important to you,” she says.

Experts say the “quiet quitting” buzzword is new, but the forces behind it aren’t.

Stephan Meier, a professor at Columbia Business School, recently told Fortune that quiet quitting is another term for disengagement. In the past 15 years, 67% of American employees and 86% of workers globally have said they were not engaged at their jobs, according to Meier. COVID-era workplace turmoil may have caused young people to become even more detached from their jobs.

“It’s possible that this has increased somewhat after the pandemic,” Meier said.

What is lying flat?

Chinese authorities censored Luo’s Baidu post hours after it went live, but they weren’t quick enough to keep “lying flat” from zipping around China’s internet. Some online forums discussing the topic drew as many as 200,000 members.

As authorities tried to clamp down on lying flat and terms related to it, users got creative. Some posted pictures of leeks, which became a symbol of the movement because the long, slender vegetables can’t get caught in the churn of a combine harvester if they’re prone. Some philosophical manifestos on the movement also managed to escape China’s censorship apparatus temporarily, as did practical guides on how to embody lying flat principles, which included advice on how to not get married, not have kids, and live minimally.

“I think of lying flat as a silent rebellion against a culture of overpressure,” says Zak Dychtwald, CEO of consultancy Young China Group. He says lying flat has helped disrupt the “996” culture of China’s tech industry, the idea—promoted by Alibaba CEO Jack Ma and other tech firms—that workers labor 9 a.m. to 9 p.m. Monday through Saturday. The lying flat movement inspired some tech workers to leave jobs at top firms and decamp for slower-paced lives in the countryside.

“They’re fed up with work…and the sense that young people are disposable in these large companies,” says Dychtwald.

The global movement to work less

Yige Dong, assistant professor of sociology at the University at Buffalo, says that lying flat and quiet quitting were born from workers in the U.S. and China questioning intense work cultures, but there’s also a common sense that the rewards for such work are deteriorating, she says. “The Gen Z generation [in China and the U.S.] has fewer opportunities than their parents’ generation did. That’s why it seems that traditional ‘work ethic’ has been diminishing,” says Dong.

China’s economic growth has slowed in recent years amid a sweeping antitrust campaign against tech giants, government attempts to rein in a bloated property sector, and the COVID-19 pandemic. China’s COVID lockdowns and closed borders have inflicted more economic pain this year, putting the country on track to grow at its slowest pace in decades.

China’s youth are bearing the brunt of the slowdown. In July, China’s youth unemployment rate reached 19.9%, the highest ever and more than double the youth employment rate of three years ago, just as a record 10.7 million college graduates entered the workforce.

“People are trying to cope with fierce competition against the background of an economic downturn,” notes Alison Sile Chen, a former political journalist in China and doctoral student at the University of California, San Diego. “They feel really anxious…And that if they have no way to [succeed] anyway they might as well lie flat.”

In the U.S., young Americans feel increasingly anxious about the state of the economy, especially as inflation hits record highs and economists warn of a looming recession. A recent survey showed that American millennials and Gen Zers feel more unprepared to handle a potential recession than baby boomers or Gen Xers.

Kevin Antshel, a psychology professor at Syracuse University, told CBS that quiet quitting may be a temporary option for workers who want to quit altogether but are too afraid to do so in a recession.

West says she decided to quietly quit rather than subject herself to the unknowns of unemployment. “I realized that I could do something that felt more on my own terms. I could take back some of that control in my life,” West says.

Lying flat and quiet quitting have both inspired fiery backlash in their respective countries.

In China, it’s unclear exactly how popular the lying flat movement is since Chinese authorities censor social media posts about the topic. But lying flat became prominent enough to draw a rebuke from Chinese President Xi Jinping, who urged the public to participate in society rather than opt out in an op-ed published last June.

“It is necessary to prevent the stagnation of the social class, unblock the channels for upward social mobility, create opportunities for more people to become rich, and form an environment for improvement in which everyone participates, avoiding involution and lying flat,” Xi wrote.

Dong says that China’s government has taken an interest in lying flat because the movement represents a threat to China’s tightly controlled political system.

“While at the individual level this does not make a difference to the system, if many people are doing it at the same time, it has the potential to interrupt the current social order,” she says.

West says that quiet quitters are still fulfilling their duties. And no matter if they are in China or the U.S., people should be encouraged to pursue their own interests above their employers’.

“At the end of the day, what it comes down to is the crazy expectations behind some of the jobs that people have, whether that’s in America or in China,” she says.