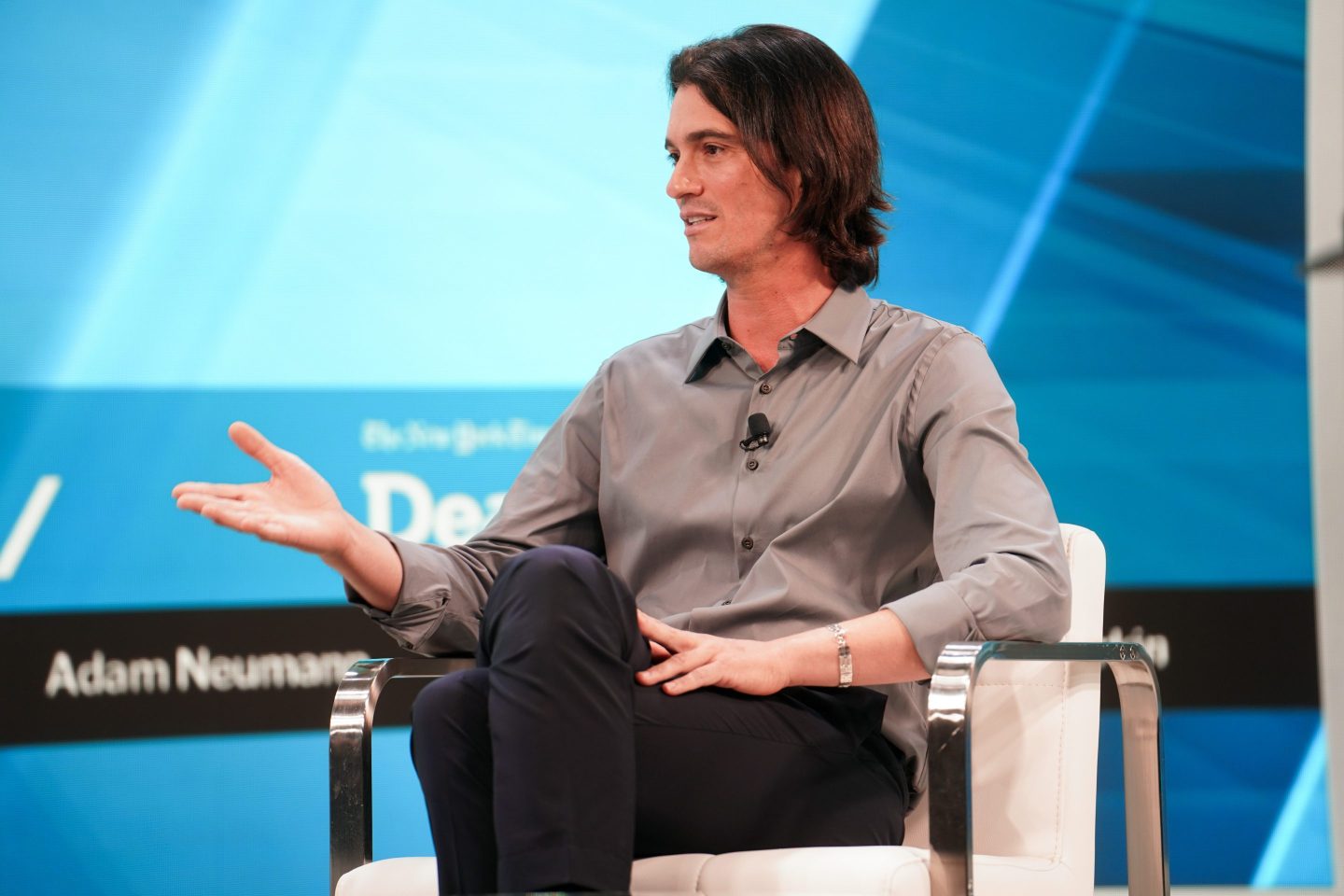 Good morning, Broadsheet readers! There’s a new Black female-founded unicorn, Janet Yellen has a plan to overhaul the IRS, and a female founder would never get a $350 million comeback like Adam Neumann‘s. Have a thoughtful Thursday.

– Who gets a second chance? For Kathryn Finney, the news this week that Adam Neumann had raised $350 million from Andreessen Horowitz for his comeback venture Flow was “a slap in the face.” The sum, after all, is more than the $324 million raised by all U.S. Black-founded startups combined in the second quarter of this year.

“It sends a signal that you can really mess up as a white guy and still get second chances to win,” says Finney, an investor and the author of Build the Damn Thing: How to Start a Successful Business If You’re Not a Rich White Guy.

Neumann, for those who need a refresher, is the founder of WeWork who led the coworking business astray ahead of its failed 2019 initial public offering. He lost his investors and employees billions of dollars, as chronicled in multiple books and the Apple TV series WeCrashed. Andreessen Horowitz earlier this week announced its $350 million investment in Neumann’s new company that aims to disrupt residential real estate and renting. That money is only what a16z has invested—not the total sum Neumann has raised for the new startup.

Neumann returns to life as a founder after one of the highest-profile flameouts in startup history. And he does so not just as a repeat founder, but with the biggest names in Silicon Valley behind him.

Investors and founders who are women and people of color see what appeals to firms like Andreessen about Neumann’s new company—they just question whether it’s responsible to give him this much capital to execute the idea. Heidi Patel, managing partner at Rethink Impact, was struck by Andreessen’s choice to invest. “I don’t get why this investment passes the sniff test for LPs,” she says. “How do you, as a responsible professional whose job it is to invest other people’s money, justify handing this person $350 million in one go?”

Investors are, of course, aware of Neumann’s track record. In a blog post announcing the investment, Marc Andreessen wrote that his firm “love[s] seeing repeat-founders build on past successes by growing from lessons learned.” To some investors, the blights on Neumann’s track record are just not as important as potential returns. “The opportunity here is a very large market opportunity,” says BBG Ventures managing partner Nisha Dua. “But investing is about both market opportunity and founder.”

For founders struggling to raise capital in a down market, the funding news struck a nerve as well. Diana Lee founded the ad tech company Constellation Agency in 2016 and is raising her first round of capital after running the business as cash-flow positive for six years. “As a female founder, we have to be fiscally responsible,” she says. “I cannot burn cash.”

Ultimately, Neumann is playing by a different rulebook than female founders and founders of color. “We have to build our companies differently,” says Finney. “We don’t have the same opportunities or runway or chances. Failure for us is fatal. And for our counterparts, many times it isn’t.”

- Unicorn status. Incredible Health, an online job-matching platform focused on nursing, announced Wednesday that it had closed an $80 million Series B funding round and reached a $1.65 billion valuation. The platform is cofounded and led by Dr. Iman Abuzeid, making it a rare Black female-founded unicorn. TechCrunch

- Revamping the IRS. Treasury Secretary Janet Yellen has asked the IRS to develop an operation plan to deploy the $80 million funding it received from the Inflation Reduction Act, signed by President Joe Biden on Tuesday. The funding is the largest the agency has seen in years. (It had a budget of only $13.7 billion in 2021.) Yellen wants to prioritize clearing a backlog of unprocessed tax returns, improving taxpayer services, improving the agency's technology, and hiring more employees. She also said the IRS will focus on wealthy tax evaders and promised that middle-class households would not face increased scrutiny or higher audit rates. New York Times

- Centers of attention. Centers for Disease Control director Rochelle Walensky ordered an overhaul of the CDC, citing its failure to quickly and adequately respond to the COVID-19 pandemic. The decision is based on the findings of an external review originally ordered by Walensky in April and follows months of public criticism of the agency’s pandemic response. She plans to restructure the agency to focus on public health needs and curbing continuing outbreaks. New York Times

- One-woman C-suite. Christina Spade, the incoming CEO of AMC Networks, recently discussed her ascent from CFO to the top job with Fortune senior writer Sheryl Estrada. Spade has now held almost every role in the C-suite; in between her hiring as CFO and promotion to CEO, she also took on the title of COO. Fortune

MOVERS AND SHAKERS: Yahoo has appointed Jen Rubio, CEO of travel lifestyle company Away, to its board of directors. Venture capital firm Crossbeam has hired Sana Godhwani as vice president and Mili Raina as senior associate. Former C2FO head of product Amanda LaFerriere has joined SigFig as its chief product officer.

- Abortion on-screen. Depictions of abortions in film in television have increased in recent years—there were 33 such depictions in 2021, a nearly three-fold increase from a decade ago. But these depictions are not necessarily accurate, over-representing teen stories and patients suffering adverse outcomes. The University of Southern California’s Annenberg Inclusion Initiative wants to tackle these portrayals, and plans to release a report on the portrayal of abortions and reproductive health. Bloomberg

- Alaska elections. There’s a high chance Alaska will elect its first female U.S. representative soon. The state’s primaries were held on Tuesday, as well as a special election to fill its vacant House seat. Former GOP Gov. Sarah Palin and former Democratic state Rep. Mary Peltola are running in both House elections, and have already advanced to the general election in November. The special election is still too early to call, though both candidates are leading in the state’s nonpartisan ranked choice vote. If elected, Peltola would be the first Alaska Native in Congress. Center for American Women and Politics

- For the Motherland. Russian President Vladimir Putin has reintroduced a Soviet-era award to encourage Russians to have large families. First introduced in 1944, the “Mother Heroine” award will offer Russian citizens a one-time payment of 1 million rubles ($16,500) after their 10th child turns one year old, but only if all other nine children have survived. While no mention of the Ukraine war was made, one expert says that the ongoing war has created “high anxiety” about population decline in Russia, which has lost as many as 15,000 men in the invasion. Washington Post

- ADA protections. A Virginia federal appeals court has ruled that individuals experiencing “gender dysphoria” fall under protections covered in the Americans with Disabilities Act. The decision was handed down in a lawsuit alleging Kesha Williams, a transgender woman, was subjected to mistreatment in federal prison, including being placed in male housing, misgendered, harassed by prison deputies, and kept from receiving medical treatment. CNN

The grace and promise of Justice Ketanji Brown Jackson Vogue

-Singer-songwriter Rina Sawayama, whose second album, Hold the Girl, comes out on Sept. 16.