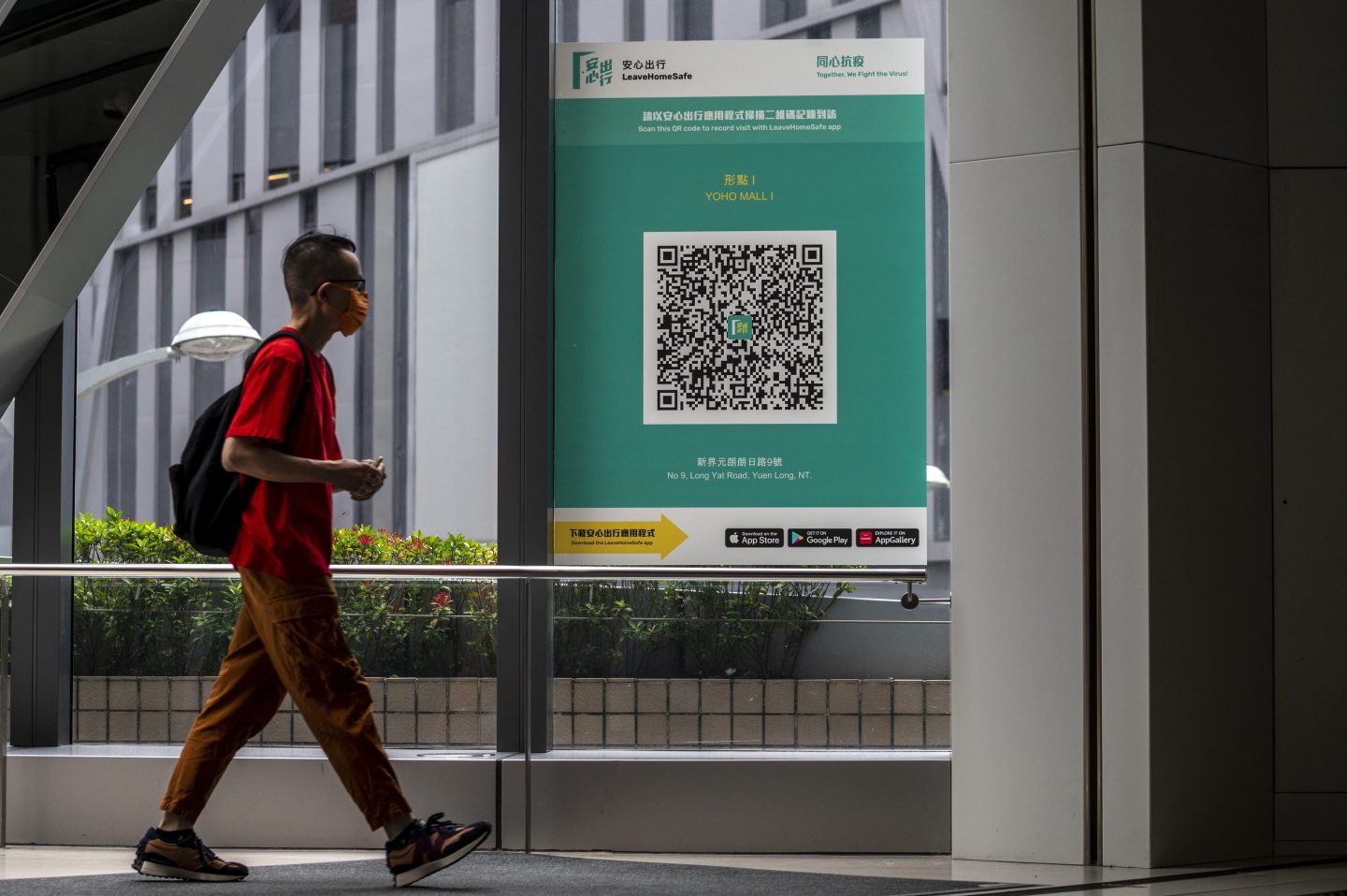 A LeaveHomeSafe QR code on display at the entrance of a shopping mall on July 15, 2022, in Hong Kong, China.
Vernon Yuen—NurPhoto/Getty Images

On Monday, Hong Kong’s government announced that it will shorten its mandatory hotel quarantine period from seven days to three for travelers entering the city starting Friday, the closest the city has come to opening its borders since the beginning of the pandemic. But as authorities dropped some of the city’s onerous COVID requirements, they introduced a new one: Hong Kong will roll out a mainland China–style color-coded health app to track potential positive cases and restrict the movement of those at high risk for COVID.

Hong Kong’s new app is an update to its existing mobile phone vaccine pass called LeaveHomeSafe, which is already widely used in Hong Kong because people need it to dine at restaurants, enter office buildings, and go to the movies. The new app will use a red, amber, and blue code—similar to mainland China’s red, yellow, green system—that shows the relative COVID risk that people pose in spreading the virus, with blue signaling the lowest risk.

All inbound travelers to Hong Kong must serve a three-day hotel quarantine while taking multiple PCR tests and daily rapid antigen tests. After the hotel quarantine, travelers enter a four-day period of medical surveillance, in which their LeaveHomeSafe code will be amber. The amber code bars users from entering bars and restaurants but allows them to go to some places like offices.

Anyone in Hong Kong who tests positive for COVID will receive a red code and will be prohibited from nearly all places outside their homes. In some cases, patients are sent to government-run quarantine centers until they test negative.

“The latest updates will help us ensure we can precisely contain the risks associated with certain groups of people,” Sun Dong, Hong Kong’s secretary for innovation, technology, and industry, said in a press conference on Monday.

But some Hong Kong residents have long worried that the government would use such an app to step up digital surveillance and track people’s day-to-day movements. Hong Kongers just need to look across the border to mainland China to see what such usage might look like.

The mainland’s color-coded smartphone tracking system has become one of the government’s main tools for imposing its COVID-zero policy that does not tolerate any spread of the virus. Virtually every Chinese citizen has to upload a health code app to their smartphones. The app contains their COVID health records, and people must scan QR codes with the app to enter public places. People may be tagged with a yellow or red code if they are in the same neighborhood as a confirmed or suspected case, which would bar them from entering restaurants, riding public transportation, or going into public places until they took one or multiple PCR tests.

The pervasive use of the app in mainland China has made the app ripe for abuse. In late May, thousands of bank depositors in China’s central Henan province protested at local banks that refused to pay them back their deposits. Authorities turned the codes of more than 1,300 protesters red, making it nearly impossible for the depositors to ride public transit or move about the city. China’s central government later punished five officials for abusing the system.

In the Monday press conference, Sun tried to reassure the public that Hong Kong authorities would not abuse their power and would responsibly handle people’s data. “I assure you that you can use the app safely,” he said.

Hong Kong is one of the last places on earth to enforce hotel quarantines for incoming travelers. The travel restrictions have devastated the city’s economy and have consistently drawn the ire of the city’s business community whose leaders complain that it’s nearly impossible to host meetings or clients in the onetime business hub. The quarantine rules have gradually relaxed since January when incoming travelers needed to serve 21-day mandatory hotel quarantines.

Still, the foreign business community does not appear convinced that the city’s new rules will boost business or leisure travel.

“It is unlikely to benefit the broader business and tourist travel which will need a full lifting of quarantine controls,” David Graham, executive director of the British Chamber of Commerce in Hong Kong, said in a statement.

Hong Kong appears to be pursuing mainland China’s zero-COVID policy with the new health code system while also slowly trying to reopen its economy. But the city may not see the health benefits of zero COVID—Hong Kong recorded 3,807 cases on Monday, nearly five times the mainland’s total—or the practical benefits of reopening its economy if it pursues both goals at the same time.

“For Hong Kong to be back on the map for stakeholders from abroad requires them to be able to come and leave as they would nearly everywhere else—that is without quarantine, tests on arrival, or the worry that they may be sent to an isolation center if they should contract COVID while they’re here,” Johannes Hack, president of the German Chamber of Commerce, Hong Kong, tells Bloomberg.