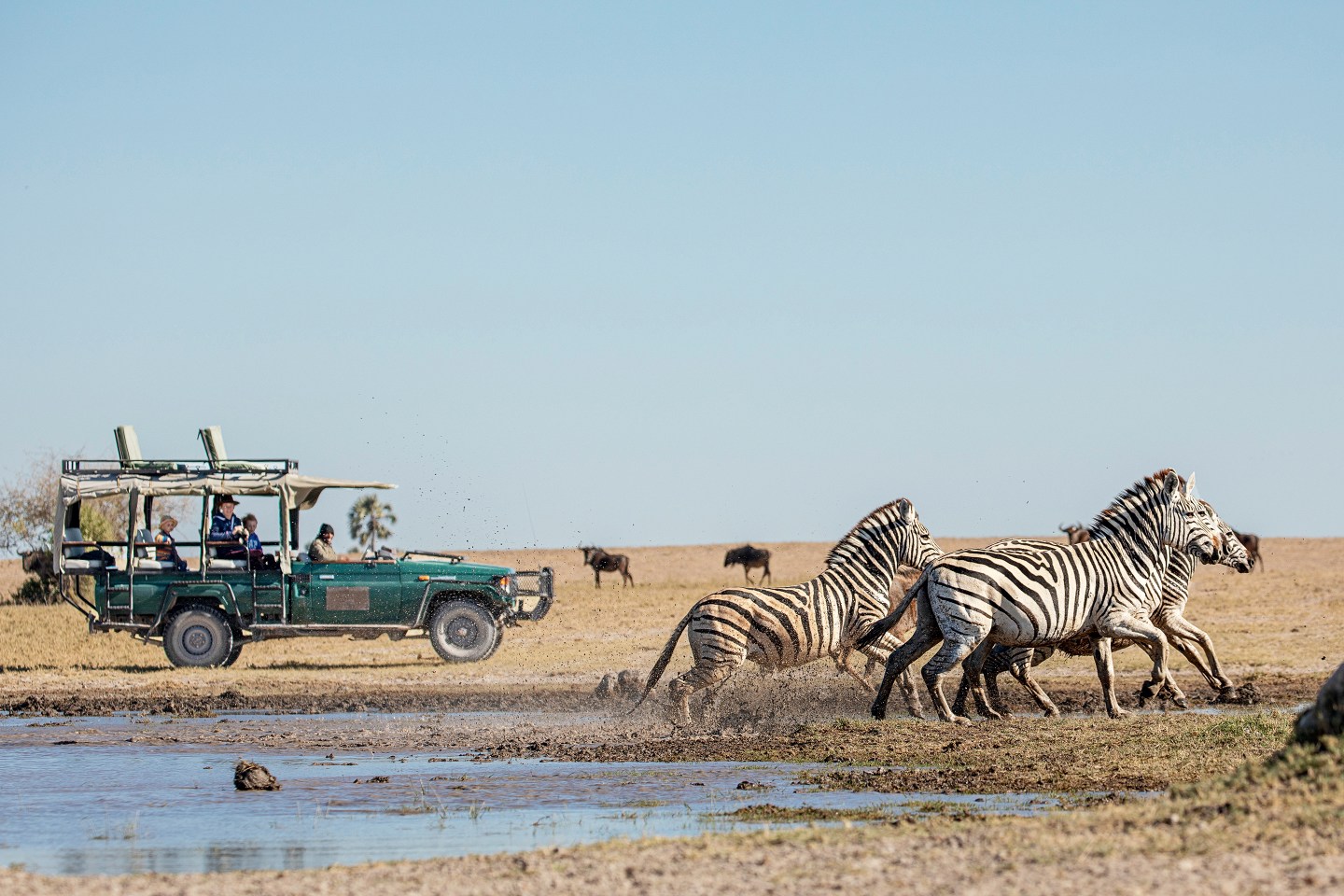 With its cascades of fuchsia bougainvillea blossoms and soaring candelabra trees, it’s easy to see the beauty of Segera, a luxe safari eco-retreat nestled in the heart of Kenya’s vast Laikipia Plateau. But grasping the full extent of the property’s scale—some 50,000 acres of richly varied equatorial wilderness, alive with countless rare species—takes a bit more effort.

For Segera’s owner, Jochen Zeitz—who also happens to be the CEO of Harley-Davidson—taking stewardship of that sprawling landscape has been the challenge of a lifetime. He acquired the property in 2005 and spent the next eight years removing miles of fencing from the former cattle ranch, reestablishing vital migratory routes for elephants and other animals, and restoring the degraded land to a thriving habitat. These days, Segera’s open plains, seasonal river valleys, and verdant wetlands teem with wildlife. Lucky visitors might spot eland, impala, gazelle, big cats, and even endangered species like Grevy’s zebra, patas monkey, and wild dog.

Creating Segera (where lodging starts at $1,895 per person, per night) brought Zeitz face-to-face with the myriad threats to Africa’s natural environments—from poachers to climate change to over-farming. It also convinced him that tourism can play a central role in conservation. In 2009 he founded The Long Run (TLR), a coalition of nature-based tourism businesses committed to sustainability and community engagement. The group now has 40 members worldwide, who collectively safeguard some 21 million acres. The goal, says Zeitz, is to create tourism companies that “can be sustainable from a conservation, community, cultural, and commercial perspective.”

The view from a Segera villa on the Kenyan savanna.
Courtesy of Crookes & Jackson

The effort comes at a critical moment. Africa’s tourism industry—which accounts for about 7% of GDP—was dealt a crushing blow by the pandemic: The United Nations estimates losses on the continent totaled between $170 billion and $253 billion from 2020 to the close of 2021. That meant vanished jobs, increased poverty, and the evaporation of the tourism fees that fund conservation and anti-poaching efforts. Now, as travelers start to return, some in the industry see potential to rebuild in a way that puts sustainability at the center of the business.

That would be a significant shift from the traditional vision of conservation, where much of the onus has fallen on big philanthropic donors, who have long been seen as the only ones with deep enough pockets to tackle the cost of preserving natural resources on a massive scale. But while donors have the economic might, they don’t necessarily have the same decades-long commitment that those on the ground, operating in local communities, can bring, says Jennifer Lalley, cofounder and conservation director of Natural Selection, a conservation-driven collection of owner-operated safari camps and mobile safaris in Botswana, Namibia, and South Africa. “Ecotourism is a huge employer in Africa and places an economic value on protected land,” she says. Engaging safari operators and lodges for the long term “can go a long way in ensuring conservation actions continue.”

Another leader in this movement (and a member of TLR) lies a two-hour drive east of Segera. Borana Lodge (starting rate: $820 per person, per night)is located in the rolling green-gold expanses of the 90,000-acre Lewa-Borana Landscape, one of East Africa’s largest continuous rhino habitats and home to 253 of the armored beasts. Since 2007, Borana has returned all its profits to conservation activities.

“If we continue to undervalue natural capital, we’ll have only ourselves to blame,” says owner Michael Dyer. “I have long argued with all sides of the travel industry that we should all be investing much more in ensuring wilderness is protected in perpetuity.”

This summer, the lodge took that commitment a step further, signing on to become one of the first TLR members to debut the group’s latest innovation, the “4C impact statement.” The document—which was posted on the TLR website in July—details how the cost of a stay impacts the destination. The lodge reports that among the projects now funded by traveler dollars are a 125-person ranger troop to protect wildlife on the Landscape, 13 local teachers, and a mobile medical clinic.

Zeitz sees this level of transparency as the best way to fight greenwashing and get the entire travel ecosystem thinking holistically about the environment. “Sustainability isn’t about a solar panel on a roof,” he says. “It’s about a comprehensive approach that’s transparent both to those who visit and to the outside world.”

TLR is asking all members to post their own versions of the statements by October. The organization says it will vet the process members use to categorize expenses and perform random checks to ensure the numbers add up.

“These kinds of initiatives around transparency are very important,” says Giles Davies, managing partner at Conservation Capital, which designs and develops new investment financing mechanisms for conservation management throughout Africa. “Amorphous reports about what lodges generally do with their resources are of limited value. When clients can see exactly how what they pay is allocated to conservation, that becomes much more meaningful—they start to create mental connections to the conservation context, and everything flows from that.”

Another industry player looking to bring more transparency to the trip-planning process is Niarra Travel. The company, whose name translates to “with utmost purpose” in Swahili, launched in 2021 with a mission to upend the way safari trips are sold. Traditionally, lodges pay up to 35% of a sale to industry players like travel agents, tour operators, and destination management companies. Niarra’s proposition: 10% commission, with the agreement that lodges reinvest another 10% into conservation and community. (So far, Niarra says, it has saved local operators more than $260,000.)

Niarra’s booking agents are certified by the Global Sustainable Tourism Council, the international accreditation body for sustainable tourism, and have visited and vetted all the properties they book. To compensate for its smaller commission, Niarra charges travelers 15% of their trip cost. Not a small fee, acknowledges founder Byron Thomas, but worth it for travelers who want the assurance that their dollars are going to organizations committed to sustainability: “We’re separating the wheat from the chaff in terms of who’s truly making a difference on the ground.” (Thomas says he hopes to eventually lower the traveler fee.)

“I believe Niarra is the first travel company that’s adopted this model, and it’s impactful,” says Sara Gardiner, cofounder of Matetsi Victoria Falls (starting rate: $885 per person, per night), one of Zimbabwe’s leading safari resorts and a Niarra partner property. “Even at the booking stage, their clients are aware that they’re making a positive impact within the destination. Many guests then fall in love with these wild spaces, begin to understand what it takes to conserve them, and want to do even more to contribute.”

Beks Ndlovu, founder and CEO of African Bush Camps, a collection of 17 sustainable camps and lodges in Botswana, Zimbabwe, and Zambia, is another Niarra partner and believes the company “is absolutely onto something.” But in addition to the need for transparency, Ndlovu says operators will need to work together to create a more sustainable industry. “We were ill prepared for the pandemic, despite the various warnings along the way like 9/11, the 2008 financial crisis, and Ebola,” he says—occasionally interrupted by the bellows of hippos outside Lolebezi, African Bush Camps’ newest lodge, located in Zambia’s Lower Zambezi National Park (starting rate: $675 per person, per night). “This is really a call to action that we should be collaborating and investing more in Africa as businesses.”

The concept: ACM collects $10 per night, per traveler from members, split between the property and the agent. Each lodge holds on to the funds from its bookings and can elect to spend up to 30% on ongoing projects—as long as the remaining 70% stays in its coffers. In the event of an emergency, members can dip into those savings, either to address an urgent issue at home or to send the money to another member in need.

“The beauty is we’ll create collaborative projects,” says Katja Quasdorf, another ACM founding member and CEO of Chilo Gorge, a luxury safari lodge bordering Zimbabwe’s Gonarezhou National Park (starting rate: $615 per person, per night). “If an ACM member agent books Chilo, for example, and also ACM suppliers in Tanzania, and suddenly there’s a massive drought there, that agent can come to us and request help.”

An elephant observes paddlers at Lolebezi in Zambia.
Courtesy of African Bush Camps

Despite their ambition, few at ACM, Niarra, or The Long Run expect their organizations to independently bring the change Africa needs to hit its big conservation goals. But they do hope to be part of the solution and feel the responsibility—and opportunity—of the place they occupy in connecting the continent with the millions of global citizens who someday hope to experience the magic of an African safari.

“There’s been a philosophical shift and realization, during the pandemic but even before, that underscored the importance of traveling more thoughtfully, given climate change and the biodiversity crisis,” says TLR CEO Delphine Malleret King. “Travelers are ready to change, but there’s still a lot of work to be done to help them travel more responsibly. We need to link this shift in heart with tangible actions they can get behind and support.”

A version of this article appears in the August/September 2022 issue of Fortune with the headline, “Call of the wild.”