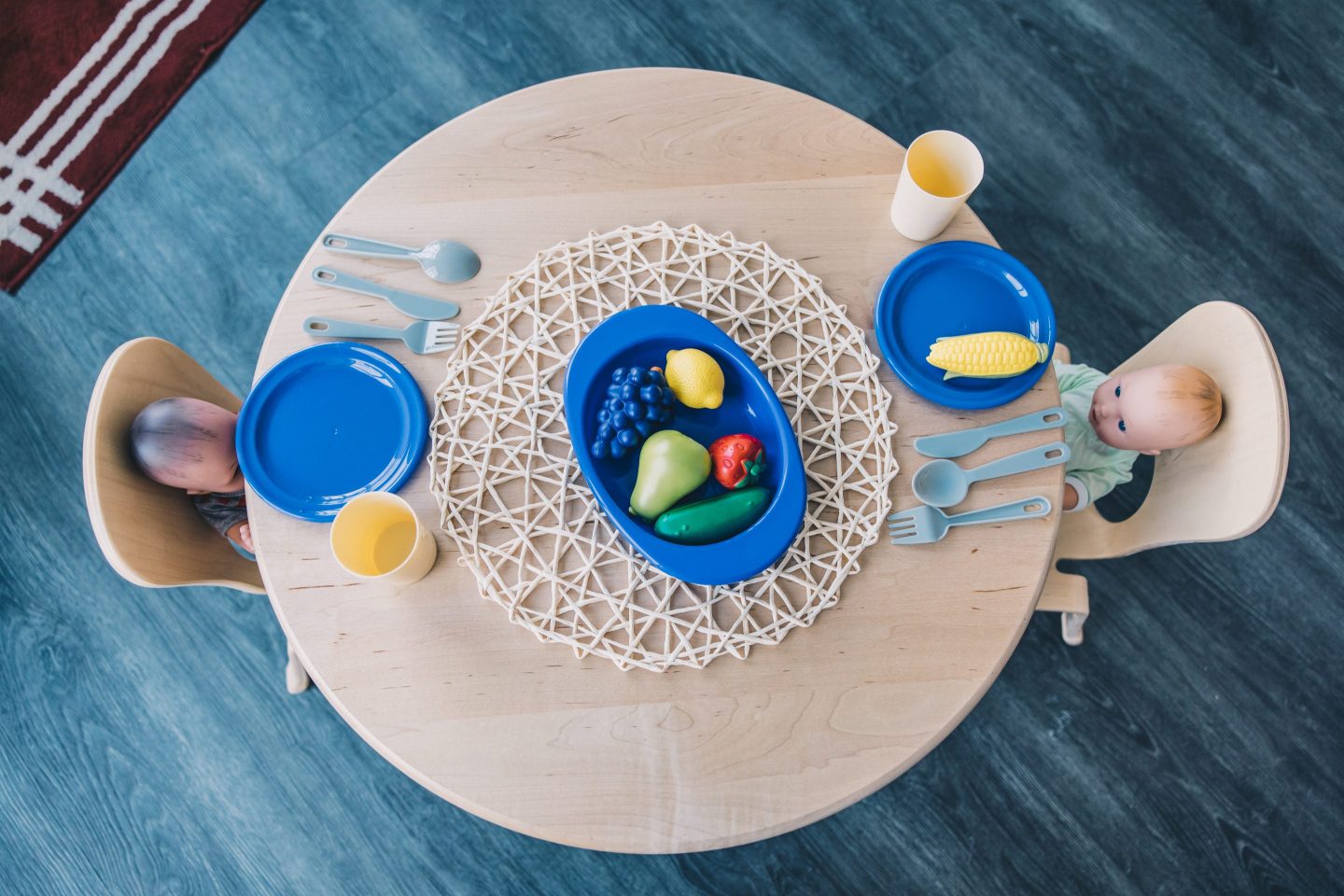 PUTTING MORE ON THE TABLE: Dolls and toys at a new onsite childcare center at the headquarters of Recursion Pharmaceuticals in Salt Lake City. Companies like Recursion see better parental benefits as increasingly crucial for talent retention.
Courtesy of Recursion

When Heather Kirkby reflects back on the time when her kids were little, she can only describe them as the “chaos years.”

“When I became a working parent I felt so alone,” says Kirkby, chief people officer at Recursion Pharmaceuticals in Salt Lake City, whose kids are now seven and 12 years old. “I couldn’t believe parents showed up to work like it was an easy thing to do, and I kept wondering why nobody was talking about how hard it is.”

That’s why Kirkby says that she and Recursion’s CEO, Chris Gibson, are determined to “make the workplace a compelling destination” for the 500 people who work at this Salt Lake City biotech company—in part by putting childcare benefits at the core of what they offer employees.

For example, in July 2021, Gibson opened an on-site childcare center in partnership with Bright Horizons, with a portion of childcare tuition subsidized by the company. While Kirkby expected the feedback from employees to focus on convenience, she was surprised by the emotional response.

“Our employees said that having the childcare center helped them feel like they belonged here,” she says. “They also told us that they appreciated being able to connect into a community of parents through the context of work.”

Welcome to the pandemic era, a time when childcare deficits have hurt employees, especially working women, more than ever. Case in point: There were 1.1 million fewer women in the labor force in January 2022 compared to February 2020, according to analysis by the National Women’s Law Center. And according to research by McKinsey & Co., 34% of working mothers reported childcare concerns as a top reason for leaving the workforce.

“There’s not enough childcare out there that’s cost-efficient and aligned with what families need,” says Charles Bonello, CEO of Vivvi, a four-year-old company that provides childcare to such employers as NewYork-Presbyterian Hospital, the New York Yankees and theSkimm. “Pre-pandemic, three-fourths of Americans lived in a childcare desert where there were more than three times the number of kids to childcare availability. COVID set that house on fire.”

However, some companies are taking action. Back at Recursion, employees are no longer mandated to be on site a certain number of days each week. Instead, they can choose to be on site for as little as 40% of the workweek, and each employee chooses how to structure that 40% so that it works within their schedules.

“Our people have leaned into this flexibility,” Kirkby says. “For example, why can’t they have breakfast with their kids, go for coffee, get to work at 10 a.m., and then take their kids to a mid-afternoon dental appointment and then work late afterwards. We don’t think a company should tell working parents what a workday should look like.”

Recursion chief people officer Heather Kirkby (left) and CEO Chris Gibson at the opening of an onsite childcare center at the company’s headquarters in July 2021.
Courtesy of Recursion

Bonello argues that we’re in a transformative time and that CEOs can no longer ignore the childcare return on investment. The lack of investment, meanwhile, inflicts its own costs: Even before the pandemic, companies were losing $13 billion annually due to the childcare challenges faced by their workforce, according to the Harvard Business Review.

In fact, Bonello says that his clients consider childcare to be one of the best ways to differentiate themselves in a competitive marketplace since The Great Resignation, which has prompted employers to compete with other companies for talent nationally, not just locally.

This also means that CEOs should consider the benefits of expanding family-support benefits beyond daycare centers and childcare programs, to include in-home support.

For example, during the pandemic Vivvi launched a program that sends trained educators to the homes of employees, to provide childcare and school support in home environments; the company says the program has grown 40% year-over-year.

Parental support from employers is also taking forms that range beyond childcare. At Carter’s, a children’s apparel manufacturer based in Atlanta, the HR team pre-pandemic held frequent in-person parent groups, covering various topics such as potty training, behavioral issues, and even picky eating. During the pandemic, those meetings went virtual, which enabled employees from other locations, including Canada, to join; they also shifted to cover such topics as the challenges of remote learning and the need for mental health support.

“Those conversations revealed how important family support had become,” says Jill Wilson, senior vice president of human resources and talent development, adding that Michael Casey, Carter’s CEO, is a father of six and has always championed these initiatives.

“In the new hybrid environment, for example, you might be working from home and your child may be home sick with you,” Wilson says. “Or, you might be taking care of a sick parent who just had surgery.” Carter’s covers all those scenarios with its home-care benefits, she notes, adding, “Just because you’re working from home doesn’t mean you should have to be distracted.”

After hearing from employees, the company also added certain benefits this year, such as increased support for fertility treatments, reimbursement for adoption and surrogacy, and offering a new mental health coaching program. “We want our employees to stay at Carter’s for a long time but, to ensure that, you have to meet parents where they’re at today,” Wilson says.

“By and large, employers are looking for every possible way they can incentivize people to come back to work,” Hipp says. “Still, we remain in a childcare crisis. We all know that parents can’t work from home when their kids are at home with them 24/7 without any type of support.”

This isn’t a problem that’s going to go away, either, especially as demographics continue to shift. Millennials are the largest demographic in the workforce right now, they’re reaching their 40s (aka their “peak performance years”), and more than a million millennials are becoming moms annually, according to the Pew Research Center.

The expectations this demographic has for prospective employers are sure to shake up existing norms, too. “A lot of companies are trying to read the tea leaves about this,” says Hipp. “There’s a lot of interest in what millennials are going to need and demand in terms of benefits.”

Ultimately, employers need to think holistically about their employees no matter their age, and take into account all of their diverse familial responsibilities when they’re on—and off—the clock.

This holistic focus on employees, no matter their dependent needs, is a priority for the HR team at USAA, an insurance company based in San Antonio, Texas, with over 38,000 employees. Last fall, the company increased its minimum base starting pay from $16 per hour to $21 per hour. It also implemented an enhanced dependent care program—for example, introducing family leave that covers 100% of pay for up to four weeks of continuous leave per occurrence when caring for an ill family member. The company also eased the cost of dependent care for those who make up to $100,000 per year and have kids ages six and under and/or disabled adult dependents.

“We should all be thinking about a lot more than just daycare,” says Wendy Salmon, senior vice president at the San Antonio, Texas-based company, which has offered childcare benefits for more than 20 years. “We need to think of our employees as a whole person and think about how they can bring their best self to work, no matter what’s happening in their personal life.”

Retaining talent and keeping employees happy is an obvious reason to support employees who are doing any sort of caregiving. “After all,” Bonello says, “working parents suffer from the burnout and the exclusion from opportunities that others don’t experience and everyone wants to work for companies where they know they will be taken care of.”

“If we don’t build more flexible companies that are more supportive and creative around how they expect how their people to work and, if we don’t care about the working mothers who carry a unique burden, we will have lost this critical moment,” she says. “We’ll miss out on diversity and fewer companies will have unique leadership teams.”

Staff from Recursion and childcare provider Bright Horizons at the ribbon-cutting for Recursion’s onsite care center.
Courtesy of Recursion

The other possibility: Employers that don’t support working families just may miss out hiring—and retaining—the best talent around.

“If you want to build the best company possible, you’re just going to have to take better care of your people.” Kirkby says. “If you don’t, they won’t come and work for you and they likely won’t stay.”