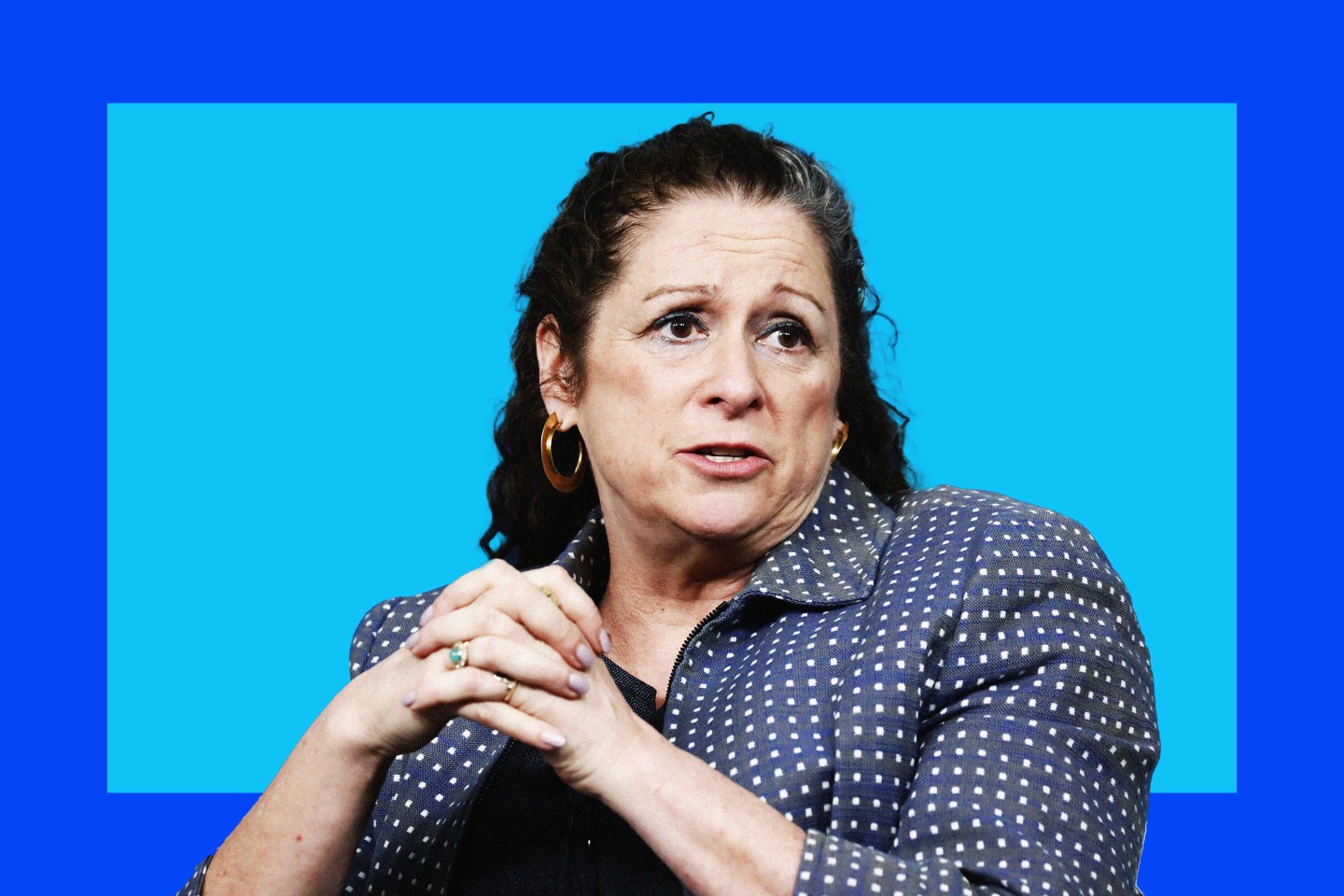 The majority of U.S. workers are paid on an hourly basis, notes Abigail Disney, “and many, many of them cannot put enough food on the table for them and their families.”
Patrick T. Fallon—Bloomberg/Getty Images

The grass is green, the sky is blue, and—despite decades of scrutiny—CEOs are still being paid way too much. Can anything rein in their skyrocketing compensation?

For Abigail E. Disney, the filmmaker and wealthy critic of her fellow one-percenters, that’s only half of the right question. In 2019, she made headlines for publicly criticizing the “insane” compensation of Bob Iger, then-CEO of the company cofounded by her grandfather, Roy O. Disney. Since then, she’s become an outspoken advocate for increasing taxes on the wealthy, and for improving the wages and treatment of workers. In January, her documentary on income inequality at Disney debuted at the Sundance Film Festival; last month, she joined about 150 other millionaires signing a letter to Davos attendees calling for higher taxes on the rich.

But after years of publicly advocating for both higher worker pay and higher wealth taxes, Disney wishes that more people paid attention to the relationship between the two—and to the ever-widening gulf between what top corporate executives earn, and what they pay their employees. In 2021, Fortune 500 CEOs earned 205 times a typical worker’s salary—and some picked up compensation packages worth far, far more. Bob Chapek, Disney’s current CEO, was awarded a pay package valued at $32.5 million, or 644 times the median Disney employee’s annual salary of $50,430. Meanwhile, the highest such pay ratio was earned by Amazon CEO Andy Jassy—whose $213 million in 2021 compensation was 6,474 times the median Amazon employee’s annual salary of $32,855.

“This divergence is just getting more and more dramatic,” says Disney, who I interviewed for Fortune’s June/July cover story on the Most Overpaid CEOs on the Fortune 500. (She continues to own an undisclosed number of shares in Walt Disney Co., but has never held a formal role at the company.)

Disney did not respond to several requests for comment. An Amazon spokesperson has told Fortune that Jassy’s 2021 compensation award, which will be paid out over the next several years, “is competitive with that of CEOs at other large companies” on an annual basis.

Indeed, at most large companies, CEO compensation has metastasized since the 1970s—as has the gulf between what top executives earn and what they pay their workers. Fortune’s new list of the 10 Most Overpaid CEOs, which analyzes how much each executive took home or “realized” last year, found that the chief executives we evaluated earned a median total compensation of $15.9 million in 2021—up 30% from a year earlier. Meanwhile, average U.S. hourly wages fell 2.4% last year, when adjusted for skyrocketing inflation.

“It’s the basic matter of fairness,” Sarah Anderson of the Institute for Policy Studies, which published a separate report on this divide last week, told Fortune. “You have workers, many of whom have performed heroically [in recent years] to keep our economy going, and yet their efforts aren’t valued more than just a tiny fraction of the value that’s placed on the efforts of people at the top of the corporation.”

While business leaders across the political spectrum have sounded the alarm on this widening wealth gap—and its potential to destabilize our democracy—the policy proposals that would address it, especially by raising taxes on the country’s wealthiest citizens, have gained little traction in a fiercely partisan Congress.

“What is really troubling in terms of politics—and the decrease in democracy, and the amount of anger out there—is about what’s happening at the bottom,” Abigail Disney says.

The majority of U.S. workers are paid on an hourly basis, “and many, many of them cannot put enough food on the table for them and their families,” she adds. “This is very, very fundamental.”

This widening compensation divide is now common across corporate America, although Abigail Disney’s advocacy has generally centered on the entertainment giant that shares her name. The Walt Disney Co. was paying some workers around $11 per hour in 2018, when she started meeting with some of those employees and unions representing them. Then, in January 2019, the company disclosed that it had rewarded Iger with a compensation package valued at almost $66 million—1,424 times the median Disney employee’s salary of $46,127 and more than 2,000 times what its lowest-paid workers earned on an annual basis. That move sparked Abigail Disney’s public critiques of the “insane” pay package.

(Some of Iger’s compensation for that year included a one-time stock grant, which he later defended as part of an agreement for him to stay at Disney longer. Chapek, who succeeded Iger in February 2020, has not been in office long enough to be considered for Fortune’s new list of Most Overpaid CEOs, which analyzed the pay versus stock-market performance of Fortune 500 chief executives who have held their roles for at least three years.)

The company has since raised minimum wages to about $15 per hour, though it continues to face worker pressure to do more. Abigail Disney argues that it—and its Fortune 500 peers—should go further, in part by tethering CEO pay to what companies pay their lowest-wage employees. Corporate boards, in consultation with workers and other stakeholders, should come up with a ratio, and “if you want to raise pay, you’ve got to move everybody up with it,” she argues. “Why is the CEO getting a raise for brilliant performance, as though he’s the only guy” contributing to a company’s success?

It’s an argument that has motivated Disney’s work as a filmmaker. Her new documentary feature, The American Dream and Other Fairy Tales, focuses on the pay gap at Disney and its wider implications for corporate America. “It makes a powerful statement when a member of one of America’s most respected families steps forward and demands change,” a Variety review declared. The film is slated to be released “in several cities” and on video-on-demand services “in the fall,” Disney says, but she declined to provide more specifics.

(Disney herself has also faced worker complaints over pay and discrimination, including unequal opportunities for women of color, at one of her production companies, Level Forward. Some of the criticisms were “fair,” she told the Hollywood Reporter last year, acknowledging “missteps and miscommunications.” In an email via her spokesperson this week, Disney told Fortune: “We have taken several steps to address problems and feel that things are operating much more smoothly than before.”)

“I don’t resent rich people for having money at all. I mean, I’ve got money,” says Disney, who is a member of the Patriotic Millionaires, a group of wealthy Americans advocating for higher taxes on themselves and their peers.

“But I do resent us assuming that we never have to take a hard look at ourselves,” she adds. “Ask ourselves: What have we done to get there? And what are we doing, even if only passively, to enable a system which is really damaging people’s lives?”

The company that generated Disney’s fortune has spent most of 2022 in the headlines—mostly for reasons other than pay. Most recently, there was a dramatic executive shakeup last week, when Chapek abruptly fired Peter Rice, the company’s head of TV. Earlier this spring, Disney weathered a prolonged internal and political showdown over Florida’s new so-called Don’t Say Gay bill. After initially staying silent about the legislation, which prohibits primary schools from discussing sexual orientation or gender identity, Chapek faced widespread employee ire and reversed course; the company eventually publicly opposed the now-law. Florida Gov. Ron DeSantis retaliated by signing a bill that will eliminate the company’s special legal (and tax) status in the state.

The protracted corporate fallout turned the owner of Star Wars, Marvel, and Mickey Mouse into a widely cited cautionary tale for every company trying to navigate the current political landscape, and its widespread consumer and employee expectations for businesses to take moral and ethical stands. “We need corporations to step up on principle, regardless of what the resulting backlash might look like,” Abigail Disney wrote in an April Washington Post op-ed about the “Don’t Say Gay” affair.

That largely hasn’t happened with the spring’s next political-meets-personal tsunami: the leaked Supreme Court draft ruling that would overturn Roe v. Wade, which guarantees the federal right to abortion.

The Supreme Court is expected to officially release its ruling this month, and most experts are bracing for it to formally overturn Roe v. Wade. Since the draft decision was leaked to Politico in early May, a handful of Fortune 500 companies have publicly reacted to it: Starbucks, Amazon, Apple, Microsoft, and Citigroup are among the employers who have said that they will cover the costs for employees who need to travel to get an abortion. (If Roe v. Wade is overturned, abortion could become instantly outlawed in at least 13 states, and possibly as many as 26 eventually.)

But Disney, like many Fortune 500 companies, has remained silent about Roe v. Wade. (A spokesperson did not respond to requests for comment for this article.) And Abigail Disney, at least, isn’t expecting that to change: “They will not go anywhere near that,” she predicts.