Visa’s CEO is confident remote work would have kneecapped his career: ‘A job can be done at home. But I’m not sure a career gets built’ 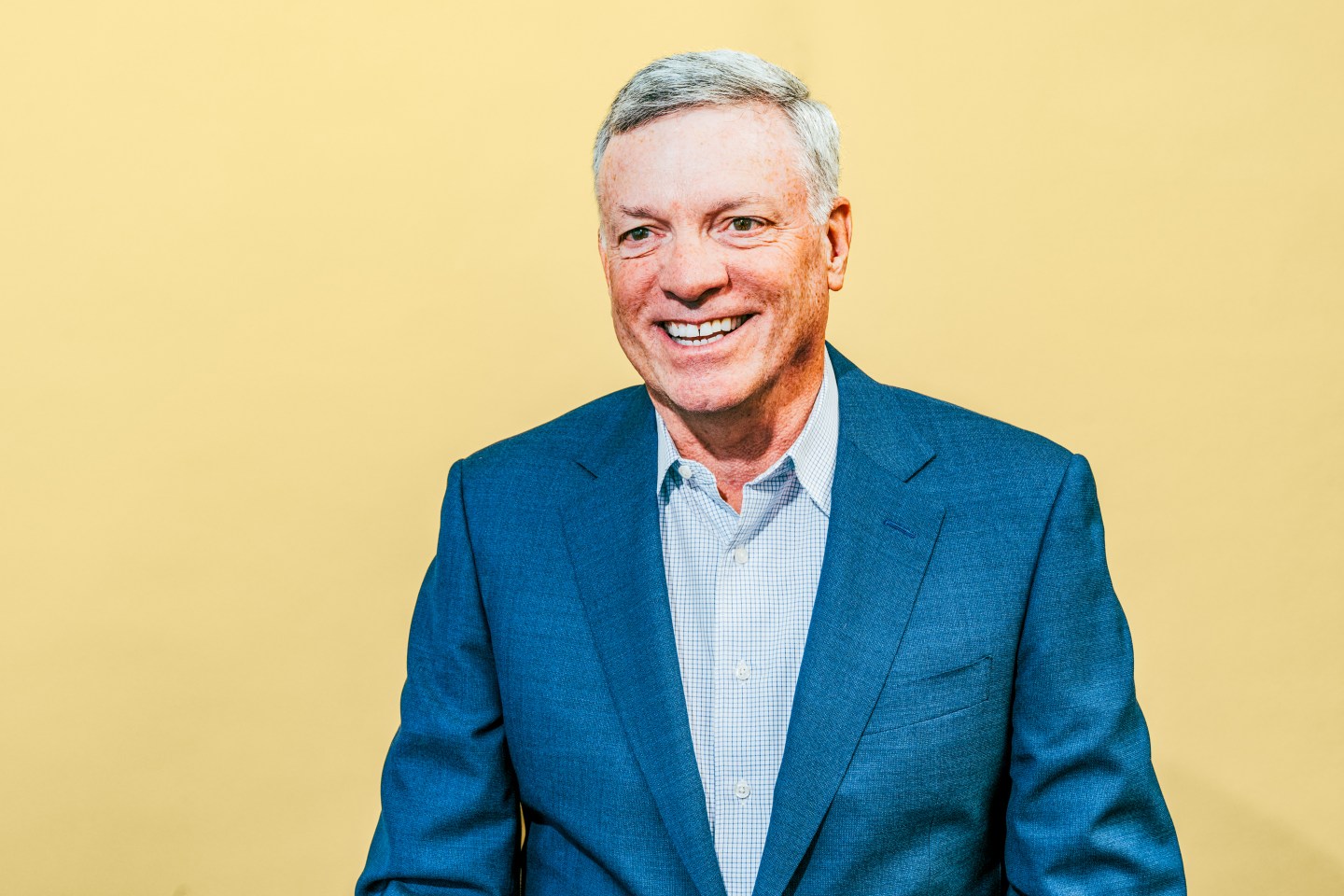 Al Kelly, chairman and CEO of Visa
Photograph by DeSean McClinton-Holland for Fortune

Visa chief executive Al Kelly Jr. is taking a flexible yet firm approach to the future of work. He’s requiring that staffers at the payments giant return to the office at least two days a week without taking as much of a hard-line stance as some of his executive contemporaries in the finance industry. Kelly, who was appointed CEO in 2016, says that face time is an essential prerequisite for fostering a strong company culture, advancing diversity efforts, and helping talent develop.

The CEO, who spent 23 years at American Express, rising up the ranks to president and head of the global consumer group before leaving in 2010, strongly believes that he would not have developed the skills needed to become CEO without the mentoring and networking that he says is easier to cultivate in person. “Much of my professional development comes from human interactions,” says Kelly.

In that regard, his views more closely align with those of some of his peers. JPMorgan Chase CEO Jamie Dimon has frequently warned that leadership development, and the necessary capabilities that come with it, requires in-person collaboration and an apprenticeship model that cannot be replicated through Zoom. Similarly, Goldman Sachs’ top boss, David Solomon, has expressed concern that younger workers, who started at the firm remotely, are missing out on “direct mentorship” and the ability to fully participate in the bank’s “collaborative apprenticeship culture.”

Kelly spoke to Fortune in a wide-ranging interview about his return-to-office considerations, the surge in cryptocurrency usage, the potential for a cashless future, and when CEOs should speak out about social issues.

Fortune: You’ve said you don’t think you would have reached the C-suite if remote work was the standard when you were coming up in the finance industry. Why not?

Al Kelly: I think becoming a more well-rounded and strongly performing professional requires constant stimulation and observation. A lot of that comes from being with people and around people, watching people, listening to people, observing them. Much of my professional development comes from human interactions. A lot of my success is built on the back of curiosity, building relationships, doing a lot of listening, watching, and learning. And I believe that’s a fundamental way that leaders get developed over time. You lose a lot of that if your life is remote and you’re only interacting with people through some video mechanism, which makes the relationship much more transactional than when you’re in an office together for eight to 12 hours a day.

I think a job can be done at home, but I’m not sure a career gets built if you work from home.

You’ve also expressed concern that work-from-home as the default could harm companies’ D&I [diversity and inclusion] efforts. How so?

AK: When somebody is a minority, they can be overwhelmed by the majority. When I’m just walking the floors, walking to the men’s room, or walking to get some water, if I see somebody all by themselves, I’ll often stop to say hello and engage them a bit. You can’t do that on video. We all have to continue to do a better job in building diversity, inclusion, and equality in our companies. In my personal opinion, it’s much harder to do if people are remote.

I think sometimes we talk too much about diversity and too little about inclusion. If you go out and recruit a whole bunch of underrepresented minorities and you then don’t include them, you really haven’t advanced the ball. It is inclusion that really completes the objective of having a truly diverse company. Statistics about hiring and retention are only the beginning of the process. True diversity is where everyone is involved in giving their perspective, and that only happens by including them.

There’s a theory that working from home has led to more meetings, negating much of the time saved from no longer commuting. What’s your take?

AK: My personal hypothesis is that people are giving at least one of their commutes (time saved) back to more meetings. Almost 26 months ago, you wouldn’t really think about having a meeting at 7 a.m. or 7 p.m. We’re a global company so obviously you sometimes had to join meetings at odd times. But as a general rule, meetings were between 8:30 a.m. and 5:30 p.m. within a time zone. Now all of a sudden, people are realizing, well, everybody’s home so why can’t we have this meeting at 7:30 p.m. or seven o’clock in the morning? I think some of that does offset some of the positives of working from home.

Visa exited Russia in response to its invasion of Ukraine despite the years it took to find a partner in Sberbank. Why make that move?

AK: Certainly in my lifetime—as a human being, never mind a leader—we’ve not seen something as overtly done in terms of moving into another country’s territory in a completely and utterly unprovoked fashion. We are a global company, we desire to be everywhere, and we want to uplift everyone everywhere.

But we ultimately drew three conclusions. One was that the sanctions were making it difficult to operate in Russia. Next, atrocities committed against the Ukrainian people in their homes were extraordinarily difficult to watch. And thirdly, we concluded that the best thing for our clients in Russia, for our business, for our shareholders and all of our stakeholders, was that an orderly wind-down of our business in Russia was better than a rushed one.

This was not an easy decision from the perspective that Russia is one of our top markets in the world. But sometimes you have to make tough calls.

Some finance CEOs have dismissed crypto as a fad. What’s your view of these currencies?

AK: There are, in our minds, three different categories of them. There is what we call digital gold, a cryptocurrency that is not backed by any reserve currency in the world⁠—Bitcoin being your top example of that. Then there are stablecoins, which are tightly tied to a fiat currency. And then there are central bank digital currencies. I do not see cryptocurrencies that are not backed by a reserve currency playing a big role in payments or money movement. I think of them more as a separate investment category⁠—a commodity if you will⁠—similar to cotton, gold, or silver. But stablecoins and central bank digital currencies I think could play a role, depending on the country.

Would that apply to the U.S.?

AK: I question the need in the United States, which is a very developed country. But if I think about emerging markets, where governments today are providing vouchers or cash, getting that to be more digital for safety reasons and for transparency reasons makes great sense.

What is the role of cash in society today? Will the U.S. ever become cash-free?

AK: There are still consumers spending about $18 trillion in cash, so it’s a pretty significant amount of money spent. I think there are still a lot of instances where there isn’t a great substitute for cash. For instance, cash tipping, which is a big deal in the United States, more so than probably anywhere else.

I’m not here to declare or seek the death of cash. But what I will tell you is that cash is extraordinarily expensive, and I don’t think people realize how expensive it is: It is very difficult to protect, to transport, to count, to store. It’s an extremely expensive asset. It’s the least transparent and secure way to pay. So I do think there’ll be more and more movement toward digitization. That’s the way the world is headed. But I think we’re decades away from being truly cashless.

Where does growth come from next for Visa?

AK: We’re focused on smaller transactions on one side of the spectrum and very large transactions on the other. Examples at the lower end would be vending machines, parking garages, those kinds of things. At the higher end, paying for insurance, paying your rent, and paying tuition, which is often paid for by cash.

For some of those higher ticket items where you might tend to write a check, and some of the smaller ticket items where you might tend to use cash, digitization can play a huge role. When you park, you don’t have to get out of the car. You can pay by a card or credential right from your phone. Real estate management companies are realizing that they can get paid quicker and, therefore, have faster access to the funds if they accept electronic payments. So I think that digitization is playing a critical role in helping us garner more of the volume at both ends.

CEOs are getting pulled into the political fray whether they want to or not. How do you decide what issues Visa wades into?

We’re in a business where literally our purpose is to uplift everyone, everywhere. The world is so partisan these days that you can get on the wrong side of an issue just because you want to speak up, and you can lose customers. I don’t think that’s a good business practice, and so I think we as CEOs should only speak up when the issue directly and with some magnitude impacts our company. Otherwise, I think CEOs need to check their political views and their opinions at the door for the most part. We need to, within reason, stay in our lanes, and not wander into territory or get sucked into having to talk about every single solitary issue.

Get to know Kelly:

• He served as chief layman for Pope Francis’s visit to New York City in 2015, and was in charge of arranging the pontiff’s day-and-a-half tour, down to such details as ticket distribution for the papal motorcade.

• At just 27 years old, he was tapped as the White House’s head of information systems under President Ronald Reagan, serving in that role from 1985 to 1987.

• He was CEO of the 2014 NY/NJ Super Bowl Host Company, responsible for planning, hosting, and raising funds for Super Bowl XLVIII.