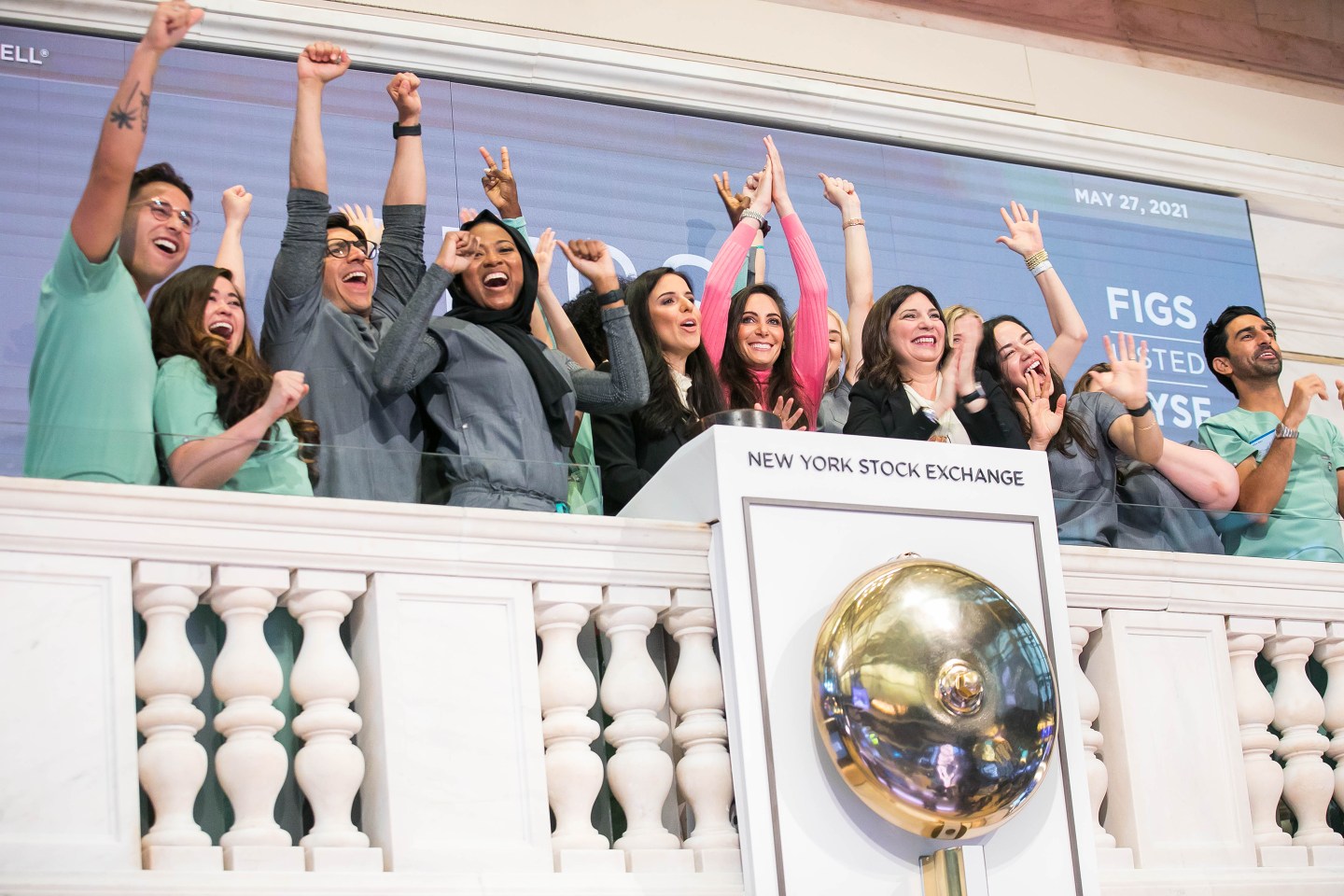 On Thursday morning, Heather Hasson and Trina Spear rang the opening bell as their company, FIGS, began trading on the New York Stock Exchange. The milestone was notable for more than just the direct-to-consumer medical apparel company: Hasson and Spear’s market debut is likely the first IPO led by two female cofounders.

While women have had several public market ‘firsts’ over the past few years, from Stitch Fix founder Katrina Lake’s IPO with her toddler at her side to 31-year-old Bumble founder Whitney Wolfe Herd’s mantle as the youngest woman to take a company public, those have largely been achieved by solo female founders or women who are part of mixed-gender founding teams. Not yet has a female cofounder duo made it to the IPO stage.

“It’s incredibly rare,” says Pam Kostka, the CEO of All Raise, the organization working to diversify Silicon Valley. “There might have been other companies that started with two female cofounders, but those that have made it through the growth gauntlet and scale gauntlet to exit together—they’re the only ones to my knowledge.”

Hasson, 39, and Spear, 37, founded FIGS in 2013 aiming to disrupt the $12 billion U.S. medical apparel market. The cofounders and co-CEOs observed a problem in the field: the responsibility for purchasing uniforms for health care workers—from home health aides to dental hygienists to physicians—had largely shifted from the institution to the individual, with 85% of employees buying their own scrubs. But scrubs were still sold at physical retailers, often, the cofounders say, in a “strip mall far from the hospital.”

FIGS took the strategies of direct-to-consumer e-commerce brands and applied them to medical apparel, selling $48 uniform pants and $38 shirts. Now, the company says it has “de-commoditized a previously commoditized product,” with 2020 revenue of $263 million—still just 2% of the total market. The company says that health care professionals have gotten used to shopping for scrubs and compression socks online, with 50% of customers returning for a second purchase and that share growing for each subsequent order.

The Santa Monica-based brand planned to price its IPO at $17.50 a share, but raised that price to $22 per share just before its listing. Midday Thursday, FIGS was trading around $28, a 30% increase from its IPO price. “This is a true celebration of health care professionals,” Hasson said on Thursday.

While the cofounders are marking a big “first,” the FIGS listing could be a harbinger of what’s to come. The IPO market reflects “what got funded five to 10 years ago,” says Kostka. (FIGS raised $60 million in funding from investors including Tulco and 500 Startups.)

Women-only founding teams got just 2.2% of venture capital dollars in 2020, per Pitchbook, while Black women and Latinas combined got just 0.64% of venture backing between 2018 and 2019, the most recent data available via digitalundivided.

The startup growth that venture capital funding supports is often critical in getting a company to the public stage. So the paucity of VC money going to women-run companies means few end up in a position to go public; just 1% of all IPOs over the past six years belonged to female-founded and female-led companies, according to All Raise. Many of those that do make it to the public markets are in the life sciences category, which is less likely to be venture-backed; just seven female founder-led IPOs since 2017 are outside that field.

“If we’re not funding them to begin with, then by default we are culling out what is actually possible to see as IPOs and successful acquisitions,” Kostka says.

But as more investors have focused on backing diverse founders over the past few years (although the numbers still remain low) more female founder-led IPOs will likely lie ahead. A handful of female-founder duos are candidates to follow in FIGS’ footsteps soon (even if both founders are not involved at the time of IPO) from the special purpose acquisition company debut underway for 23andMe (founded by CEO Anne Wojcicki and Linda Avey), to unicorns Rent the Runway (CEO Jennifer Hyman and Jenny Fleiss), Away (CEO Jen Rubio and ex-CEO Steph Korey), and ClassPass (executive chair Payal Kadakia and Mary Biggins).

Bigger-picture, exits of the diverse founder-led companies backed by investors over the past few years are likely to ramp up in five to 10 years, Kostka says.

For FIGS, being the first has special meaning for a company whose customer base is largely made up of women. Health care is one of the fastest-growing professions for women, and 83% of FIGS customers are women. Two-thirds of customers make less than $100,000 a year, suggesting that they are largely in health care roles other than physician.

FIGS’ listing was one of the first at the New York Stock Exchange this year to debut with a pre-pandemic level of fanfare; the company invited 60 health care workers to join the founders on stage on Thursday. “I hope this inspires health care entrepreneurs, female entrepreneurs, that are starting their own practices,” says Spear.

As for female-founded businesses beyond health care? “Anytime there is a big IPO, people do the evaluation: did I decline that opportunity or not?” Kostka says. “Shining a light on the fact that there are women building incredibly strong businesses that are changing industries and generating wealth for themselves, their boards, and their teams—it’s a signal to the industry about the opportunities that are being overlooked.”