The challenges to reopening Paris’s famous café and bar scene 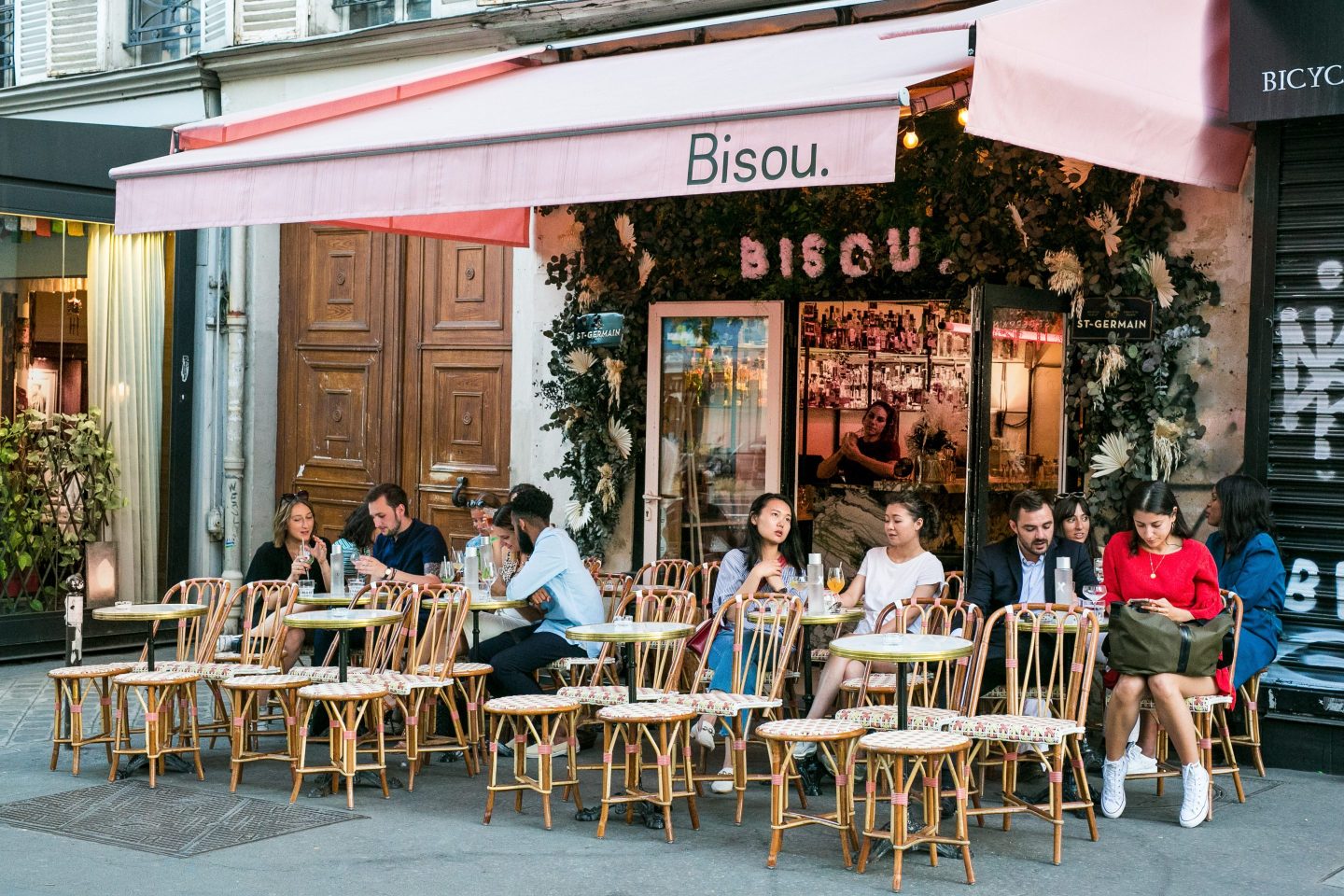 “We’re back, baby!” yells Nicolas Munoz, the 32-year-old owner of two popular cocktail bars in Paris, Bisou and Divine, to clients he hadn’t seen in months on a chilly late March afternoon. After shutting for a second lockdown in early October, Munoz and a skeleton staff reopened the doors to the pink-hued Bisou in the Marais district in late March not as a cocktail bar, per se, but as a craft coffee shop. And they couldn’t serve guests in their usual way—shimmying between tables on their spacious terrace—but in to-go cups.

While the foray into coffee initially appeared as a response to the ongoing forced closures (per President Emmanuel Macron’s last announcement, the reopening of cultural venues, retail stores, and restaurants and bars will happen gradually as of mid-May, at the earliest), it was simply the right time for an idea that was part of Munoz’s strategy for the space from the moment he signed the lease.

“When you see the sunshine we get on the terrace in the morning here, it’s obvious that it’s an ideal spot for a coffee shop. But our trade is in cocktails,” Munoz explains between clients. “I know from my first bar-restaurant project that was open day and night that if you want to develop your business as a nightspot, you need to focus on that first.”

Now, with four years of experience and a solid clientele on his side, it was an opportune moment to test the waters, particularly during a period when coffee shops are among the few establishments permitted to remain open. “During the first lockdown, we weren’t in a position to launch anything new given all the unknowns,” he continues. “By the third, we were done letting ourselves be subjected to the government’s constantly changing decisions.”

Bisou offers both coffee and cocktails for takeaway service.
Courtesy of Bisou

Munoz hired Caroline Noirbusson—previously client director for Coutume café and roasters and Belleville Brûlerie (and a World Brewers Cup French champion)—to train the team on coffee before she eventually moves over to her permanent role managing Divine, whenever it’s allowed to reopen.

But Munoz is also using the time to build out his cocktail offering and anticipate a slow return to normal operations. Given the reduced seating capacity that will inevitably be enforced upon reopening, he’s planning to roll out aperitif boxes, which will include 250-milliliter bottled cocktails off the Divine menu and snacks that clients can pick up from either bar and take to outdoor or at-home gatherings. “Ninety percent of our seating at Divine is indoor, so we won’t be able to welcome everyone back the way we’d like,” he says. “This is a way of maintaining our experience in the short term.”

Where Bisou and Divine clients hail predominantly from Paris, Candelaria, ranked among the world’s best bars, has historically drawn a heavy out-of-towner crowd whose return to the city is, for the moment, unknown. As the bar-taqueria approaches its 10th anniversary later this year, co-owners Josh Fontaine and Carina Soto-Velasquez have used this time and much of the government aid they’ve received to refresh the bar’s interior as well as to push their bottled cocktails (they have been particularly popular among companies looking to run virtual cocktail hours for employees).

For reopening, Fontaine and Soto-Velasquez, who also own Le Mary Celeste and Hero, are banking on the continuation of the “COVID-terraces” Mayor Anne Hidalgo implemented last June which would allow Candelaria to seat up to 20 clients outdoors. “There’s a rumor that the mayor will make these terrace permits permanent for each summer season. So we’ve also invested in a better quality setup that can be dismantled and stored, so we won’t have the extra cost next year,” Fontaine says. The question remains: Will all the investments be enough to boost business?

“What would be concerning is if they let us open outdoor seating but cut off the aid immediately,” Fontaine says. “Last year, when we reopened we were super busy, but given the capacity limits and fixed costs, we were losing money.” If the government support dries up too soon, theirs won’t be the only business at risk.

All the more reason to keep diversifying revenue streams. The duo is working on launching an annex business called Ceremony,  a natural wine and cocktail subscription service that will be available nationally beginning in June. “It’s definitely a reaction to the situation,” Fontaine says. “There will be a B2B offer as well, where we’ll propose large format bottled cocktails or even kegs for restaurants that don’t necessarily have the capacity to hire a bartender or have a bar.”

Still, emerging from this period is fraught with uncertainty. Fontaine expects business to come back strongly, but adds that if there’s no tourism, recovery will be a challenge. “Paris has too many bars and restaurants for its local population alone. If you take millions of potential clients out of the scenario, chances are that few will survive.”

Ninon Lecomte shares Fontaine’s anxiety surrounding the months ahead but for different reasons. Co-owner of the neo-bistro Brutos, known for its Brazilian grilled meats, Lecomte and her husband–business partner, Lucas Baur de Campos, have been working since early 2020 on opening Bar Principal, a venue two doors down from their restaurant in the leafy Square Gardette. They signed the contract during the capital’s strict lockdown period last spring, secured the loan shortly thereafter, and began renovations (and paying rent) by fall. With advanced approval from the city for spacious outdoor seating, she and Baur de Campos were able to adjust the interior design to ensure they can adapt flexibly to changing rules on capacity. Instead of high tables that would leave little room to store all of the outdoor furniture they need, they opted for a long counter lining the wall, beneath bottles of natural wine, along with space-saving bar stools.

As all signs point to a late spring launch, the challenges that keep her up at night involve staffing. “It’s incredibly difficult to build a team when you don’t know when you can open. I’ve never received so many good CVs, but I can’t promise them a start date,” says Lecomte with great concern. Two months spent visiting her family in Brazil, where a lack of aid has left many businesses languishing, reaffirmed how lucky she has been to be operating in France where state support has been generous.

Nonetheless, Lecomte feels as if she’s at the starting block but afraid to miss the mark. “Expectations are high. We want to introduce people to our new spot as much as they want to be out socializing over drinks after nearly eight months of closures,” she says. “We have to get it right.”