The biggest problem with capitalism? Not enough capitalists 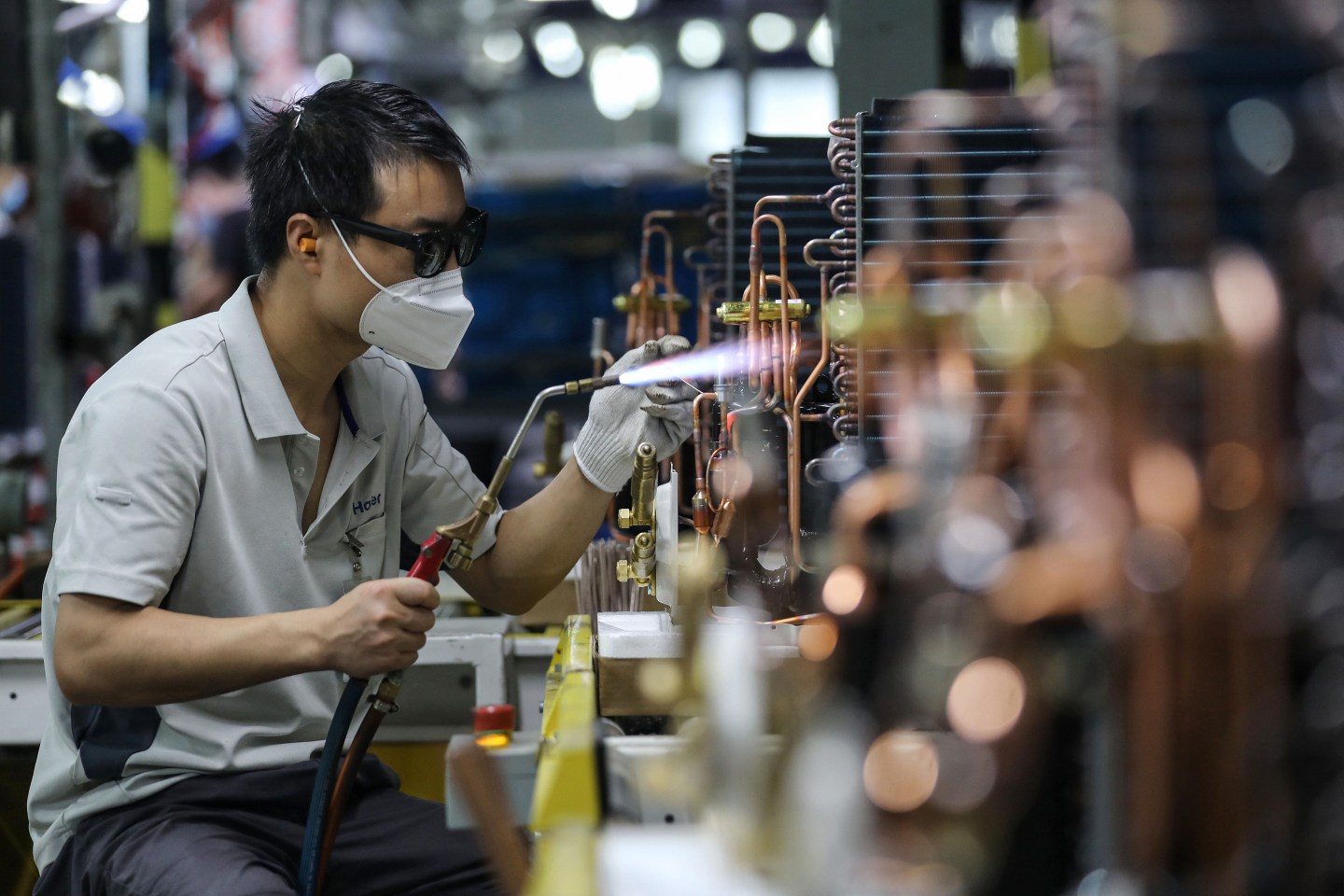 An employee works on an air conditioner production line at a Haier factory in Wuhan, China, on Sept. 10, 2020. More entrepreneurship within businesses can help fix the economic inequality plaguing many capitalist societies, write Gary Hamel and Michele Zanini.
STR/AFP/Getty Images

The recent election gave voice to millions of Americans frustrated with their economic circumstances—a concern that predates the devastation wrought by COVID-19. On one side are the blue-collar victims of deindustrialization who, as in 2016, voted for Donald Trump. On the other side are young college graduates struggling to get ahead who, unable to vote for Bernie Sanders, plumped for Biden.

Whatever their political leanings, a vast number of Americans have lost faith in capitalism. A May 2020 JUST Capital and Harris poll found that only 25% of those surveyed agreed that “capitalism works for the ordinary American.” Doubts about capitalism are not limited to the U.S. In a 2020, pre-COVID Edelman survey of 34,000 individuals across 28 countries, 56% of respondents agreed with the statement that “capitalism as it exists today does more harm than good.”

Capitalism is charged with being fixated on shareholder returns, myopically short term, inherently monopolistic, antidemocratic, amoral, rootless, and bad for the planet. But these indictments confuse the concept of capitalism with its implementation.

Capitalism is simply a tool—one that channels savings into investment and rewards risk-takers. Blaming capitalism for its misapplication is like blaming sex for overpopulation, teenage pregnancies, and sexually transmitted diseases. We can address these problems without all becoming celibate.

So it is with capitalism. You don’t have to be a Marxist to believe we need more vigorous antitrust enforcement, higher standards of environmental accountability, more incentives for people to buy and hold their investments, and stronger laws aimed at preventing tax avoidance and corporate interference in politics.

Yet as sensible as such measures might be, they fail to address what many see as capitalism’s most egregious fault—its failure to equitably distribute the rewards of economic growth and prosperity.

While investors and entrepreneurs have done exceedingly well in recent years, the salaries of ordinary workers have stagnated. The rich have become richer, and the poor poorer. The relative decline in the fortunes of mid- and low-income workers has exacerbated social divisions, fueled the fires of populism, and convinced millions of young people that socialism is their best hope.

But what if the problem is not too much capitalism, but too little? What if the problem is that we have too many wage slaves and not enough owners?  At the time of its founding, America was a “republic of the self-employed,” as Roy Jacques put it in his wonderful book, Manufacturing the Employee.

Today, nearly two and half centuries later, a vast majority of Americans still share the dream of working for themselves. In one poll, 77% of millennials said they hoped to start their own business. Sadly, though, the rate of new business creation has been declining in recent years, while the percentage of Americans who work in companies with more than 1,000 employees—41% in 2019—has been growing. For millions of individuals at work, the entrepreneurial dream seems out of reach.

Yet our research suggests they shouldn’t give up hope. A small group of vanguard companies have proven that it’s possible for every employee to enjoy the fruits of ownership—for everyone at work to be a self-managing “micropreneur” blessed with autonomy and a shot at the brass ring.

Consider Nucor. With annual revenues of more than $22 billion, Nucor is America’s most innovative and consistently profitable steel maker. The company is organized into more than 75 autonomous divisions that operate independently but compete collectively. Each division is a self-contained business with a P&L that’s entirely free of corporate cost allocations.

Nucor trains every employee in the economics of the steel industry, and its hyper-empowered operating crews take the lead in business development, customer service, product innovation, process improvement, and cross-plant coordination. Frontline employees participate in a generous bonus system that rewards teams when they boost capital efficiency. Base pay is about 75% of the industry average, but once a team’s output exceeds a threshold, typically 80% of the plant’s rated capacity, the bonus plan kicks in.

The incentive threshold is fixed and gets adjusted only when capital investments increase the rated output of a particular piece of machinery or the entire plant. Since the only way to increase their bonus is to produce more steel for a given amount of capital, team members have a powerful incentive to “sweat the assets.” In practice, this means using their ingenuity to shrink costs, speed up workflows, and search for ways of producing higher-margin products.

To keep employees free of bureaucratic meddling, Nucor has chosen not to centralize functions like R&D, sales, marketing, strategy, safety, engineering, compliance, and purchasing. It also has about a third as many managers per capita as its major competitors. Nucor’s headquarters, for example, has just 100 staffers—about 10% of the number who work in the head office of Nucor’s next biggest U.S. competitor. Nucor’s general and administrative expenses hover around 3%, or roughly half that of the industry average. As a plant leader put it, “At Nucor, being a manager is the least noble thing you can do.”

The trust Nucor’s leaders place in their frontline teammates pays big dividends—for shareholders and employees. Nucor’s return on capital exceeds industry norms by 50% and its revenue per employee is a whopping three times the industry average. In return for this performance, Nucor’s factory workers earn significantly more than their peers. They also enjoy a high degree of job security. One of Nucor’s most famous mottos is “Do your job well today, have it tomorrow.” The company has never laid off employees at its steel mills, a remarkable feat in a highly cyclical industry that shed 40% of its employees in the last decade.

Haier, the global home appliance leader, is another case study in workplace capitalism. (Disclosure: with Haier, we co-host an annual conference on the future of management.  We’ve also co-developed a free online course for management innovators).

With 45,000 employees in China, Haier has divided itself into more than 4,000 microenterprises, or MEs. These include roughly 200 market-facing MEs that design and sell appliances, and thousands of distribution and “node” MEs that sell R&D, manufacturing, marketing, and HR support to internal customers. Market-facing MEs contract with nodes for critical services, and each contract contains a clause that links payout to the success of the final product in the market. In this way, every employee’s pay is tied to market outcomes.

As with Nucor, base pay at Haier is modest, but when employees hit ambitious “leading targets,” they have the chance to multiply their income several times over. Employees are also able to invest their own money in their ME, and can receive a hefty dividend when certain targets are met.

Zhang Ruimin, Haier’s pioneering CEO and chairman, describes the goal of Haier’s unique management model as “giving every employee the opportunity to become their own CEO.”

Other companies that have built a league of owners include Stockholm-based Svenska Handelsbanken and Vinci, the fast-growing French infrastructure firm.

As these and other companies demonstrate, the recipe for turning employees into capitalists isn’t complicated. Key ingredients include:

This recipe, if consistently applied, yields a highly energetic workforce, above-average compensation, and a business that can beat all comers, both foreign and domestic.

That more companies haven’t adopted this winning formula isn’t the fault of capitalism, but of bureaucracy—a 150-year-old mash-up of military command structures and workforce engineering that underpins virtually every large-scale organization on the planet.

Here are some defining features of bureaucracy:

With its authoritarian power structures and rule-choked processes, bureaucracy is a caste system that empowers the few at the expense of the many. It stratifies organizations into thinkers versus doers—executives versus employees—and in so doing, squanders vast quantities of human initiative. Slotted into narrow roles, immobilized by petty rules, and regarded by their superiors as mere “resources,” millions of employees have been deprived of the opportunity to develop their entrepreneurial talents; they’ve never had the opportunity to work with colleagues in a business that feels like it’s theirs.

Surveys tell us that only one in five employees believe their opinions matter at work. Only in one in 10 feel they have the freedom to experiment with new methods, products, and solutions. These sentiments are backed up by data from the U.S. Bureau of Labor Statistics, which calculates that 70% of jobs in the economy require little or no originality—a fact says nothing about the abilities of the individuals in those jobs, and everything about the tendency of managers to treat employees like semi-programmable robots.

Moreover, data compiled by Great Places to Work shows the only one in five of the reporting companies pay out bonuses to frontline workers—and these are, reputedly, the most progressive U.S. employers. More generally, across the economy, non-production-based bonuses, such as profit sharing, amount to barely 2% of total compensation.

As long as the vast majority of employees are denied both autonomy and upside, the bounties of capitalism will continue to be narrowly distributed. To change this, every organization needs to commit itself to building a top-to-bottom culture of ownership. This is the secret to turning dead-end jobs into get-ahead jobs, to upgrading wages across the economy, and to ensuring that capitalism works for everyone.

Gary Hamel is a visiting professor at London Business School and co-author of Humanocracy: Creating Organizations as Amazing as the People Inside Them. He is co-founder of the Management Lab, an organization that builds technology and tools to support breakthrough management innovation.

Michele Zanini is co-author of Humanocracy and co-founder of the Management Lab.