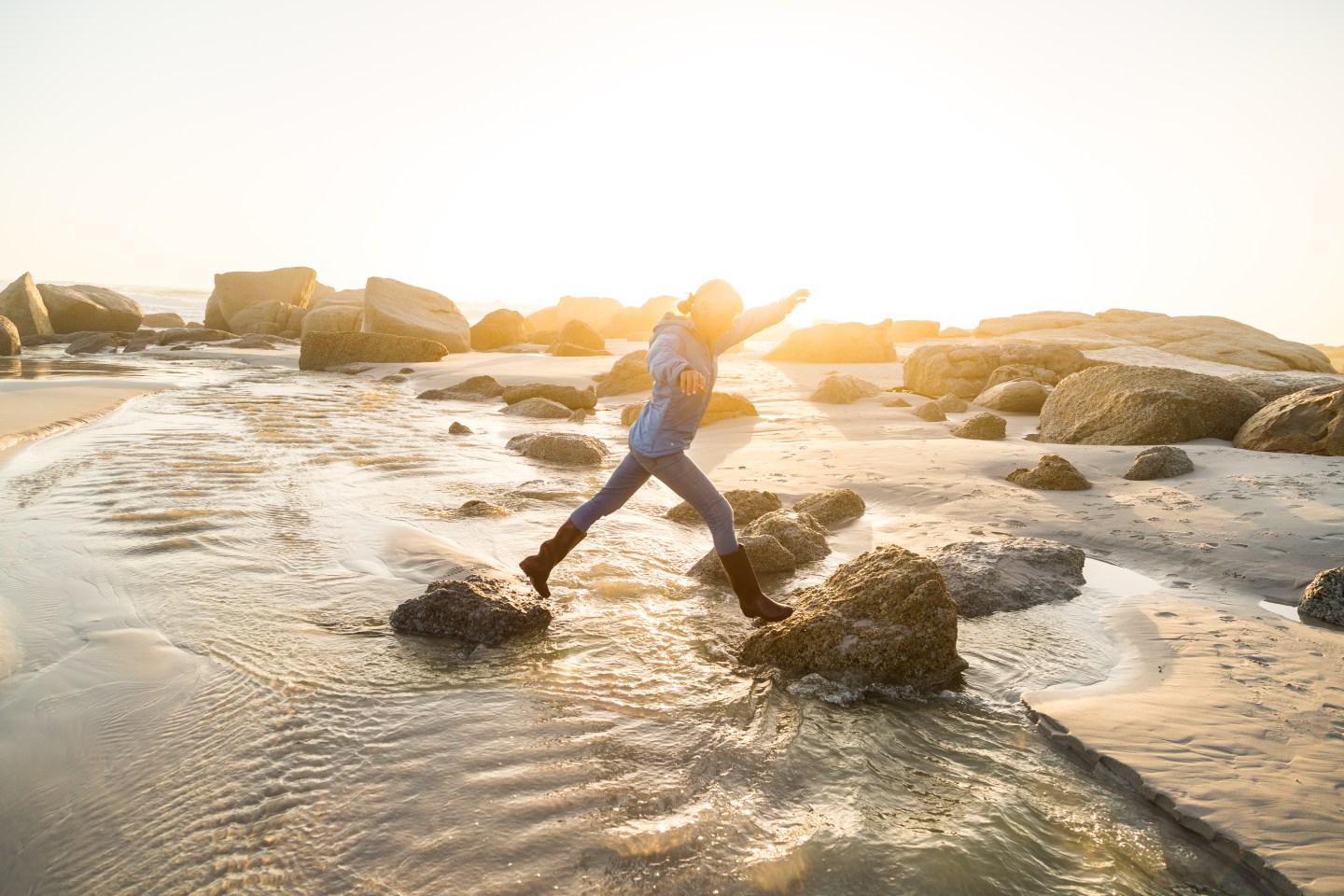 When you’re trying to change a habit, what’s the first thing you learn about yourself?

How quickly you can fail … on incredibly easy tasks.

Have you ever tried to pick up meditation? Not intense, hour-long sessions—just a 10-minute-a-day meditation practice? It’s incredibly difficult.

Why? It’s not about the time—everyone can find 10 minutes in their day. And it’s not about the effort; the task isn’t to drive all the way to a gym and sweat. It’s to sit still—to not do anything. The only way to fail at meditation is if you try to do something.

This should be incredibly easy…and yet we fail. This is true for all kinds of habits you want to establish but haven’t yet—journaling, taking medication, drinking more water. They’re all technically easy to do, yet difficult to do consistently. Need more proof? Just look at how many self-help books are available on habit change.

So how do you change habits?

Imagine someone comes to you and asks you to take shorter showers, walk more (instead of driving), and start recycling. This person lists all the benefits of these environmentally positive behaviors, offers to make the actions easier for you, and gives you a fun goodie bag.

Researchers in the U.K. actually did this. They reached out to 800 households and gave half of them a series of nudges designed to encourage environmentally friendly behaviors. The good news? Their efforts paid off—environmental nudges worked. The bad news? It only worked for a certain percentage of the people.

In fact, there was one single factor that trumped all others when it came to those for whom the nudges worked. It wasn’t age or gender. It wasn’t income or education level. And it wasn’t how much the person in question wanted to help the environment.

The difference was whether the person had moved (that is, relocated) within the previous three months.

If someone had recently moved, they were far more likely to adopt the environmental behaviors than someone who had not moved.

Why? For most people in the study, the only thing that changed in their lives was that some random researchers tried to convince them to do something new. Everything else stayed the same—their commute, where they shopped for groceries, who their neighbors were, etc. But for those who’d recently moved, everything about their life had changed— their commute, their stores, their neighbors, their daily rhythm.

The people who hadn’t moved were likely comfortable. They were running a well-oiled machine called Life. Change was possible, but to do so would require adjustments to the well-oiled machine and a disruption to its operating manual.

By contrast, people who had just moved were in the process of creating a new operating manual. They’d already restarted their well-oiled machines and were in the process of booting up new routines and habits. So when random researchers nudged them to establish new behaviors, they were already in a headspace conducive to change. In other words, it was easier for people to change their behaviors when the environment changed.

Why does moving move the needle?

Here’s what you most likely think your process of change looks like (also known as the normalized model for behavior change):

The catch is that this particular chain of events only happens when you’re faced with a new or unfamiliar situation. In novel situations, you can set intentions about what you’ll do, and there’s a reasonable likelihood that these intentions will manifest into actual behaviors. However, if everything about your environment stays static, there’s a strong likelihood that your good intentions won’t manifest into new behaviors.

In other words, you may intend to take public transit, meditate, or drink more water, but your intention, in and of itself, is not the predictor of you taking action.

This is because habits are not based on intention; they’re based on environmental cues.

So, yes, you can read self-help books that explain how to form or break a habit. And, yes, you can create an intention to meditate, drink more water, and start journaling. But if your environmental cues stay the same, your good intentions almost certainly won’t be enough.

So how do you change a habit to improve your life?

Not by reading a book on habit-formation. Not by setting a strong intention. Instead, you change your environment. That’s how you get abnormally easy habit change.

In 2014, London Tube workers went on strike for 48 hours. During this time, commuters couldn’t take their normal routes—they were forced to use other subway stops to get to work.

As you can imagine, this must have been annoying to those affected. You arrive at your normal subway entrance and it’s blocked off. What do you do? You likely shrug your shoulders and carry on to the next one, assuming you’ll be late for meetings.

But when the strike ended, something funny happened: 5% of people didn’t return to their previous route to work. Instead, 5% of people had, in that two-day period, found a faster route, saving themselves on average six minutes a day.

When our environment changes, our automatic habits are disrupted and we’re more open to change.

If the environment of decision-making stays the same, your daily habitual behaviors will most likely stay the same.

If, before the strike, you had asked Tube-taking Londoners, “Do you want to shorten your commute?” people would have said yes. Yet they didn’t actually take actions to shorten their commute. It took shutting down the Tube to make this possible.

Abnormally easy habit change happens when we change our environment. Or, as sometimes happens, when we get lucky and the environment is changed for us! For example, when a strike happens…or we’re going about our normal lives, and—BAM!—a global pandemic arrives.

3 tips for changing your habits

Here are three tips for making habit-change easy, by focusing on environment rather than willpower.

1. Capitalize on moments of ‘life arbitrage’

Once you realize behavior change is possible and even easy, you can start to look for these moments of life arbitrage and capitalize.

For example, COVID-19 has dramatically changed our collective habits. Millions of us have started doing grocery delivery more, cooking at home more, and baking more. We’ve also been finding new ways to work out at home and exercise our creativity.

The Economist recently published some Google search data that highlights big spikes around these topics, as well as some stickiness. Google search traffic for cooking, exercise and crafts remains above normal levels. For example, in late July searches for “dumbbell” and “Strava”, a workout app, still hovered 60% above the usual levels. Searches for “recipe” were still up 20%. How crazy would it have seemed pre-COVID to see such massive behavior change?

You don’t have to wait for a pandemic to establish healthy new habits; you can actually generate “big” moments yourself.

Life transitions are moments when behavior change is abnormally easy. These include events like changing jobs, moving homes, or having a baby. We’d go so far as to say some of the biggest “behavior change” companies are not apps that help you track your walking, but ones that help you change jobs or move homes.

Take the app Open Door. Open Door will make you an all-cash offer on your home within 24 hours, which makes finding financing for your next home a breeze. A process that could take months and require a lot of work is now reduced to the click of a button and a wait of a few weeks.

It’s worth noting that if you’ve been in your home or job for more than a few years, you’ve also likely had the same habits and routine for more than a few years. So while you don’t want to move jobs or homes every year for obvious reasons, it’s good to understand that it actually deeply serves you and your habits well to make major life changes semi-frequently.

If it’s not possible for you to switch jobs or move houses (and we get it), there are also smaller steps you can take to change your environment in meaningful ways.

Then, for example, take an extended trip. Given the pandemic, many people are working from home—but this means you can really work from anywhere.  If it’s feasible, take a two-week trip somewhere to change your space; if you can get away for even longer, do it.

This gives you two opportunities to change your habits: in the new place where you are for two weeks, and when you get home. Have you ever noticed that when you get back from a trip, it’s easier for you to establish a new routine (like getting up earlier)? Take advantage of that to consciously establish the new habits you actually want.

Our habits are the foundation of our lives; the rituals and repeated actions we take shape who we are. We can design our lives to support good habits by seizing the moment.

Kristen Berman is the founder and CEO of Irrational Labs.