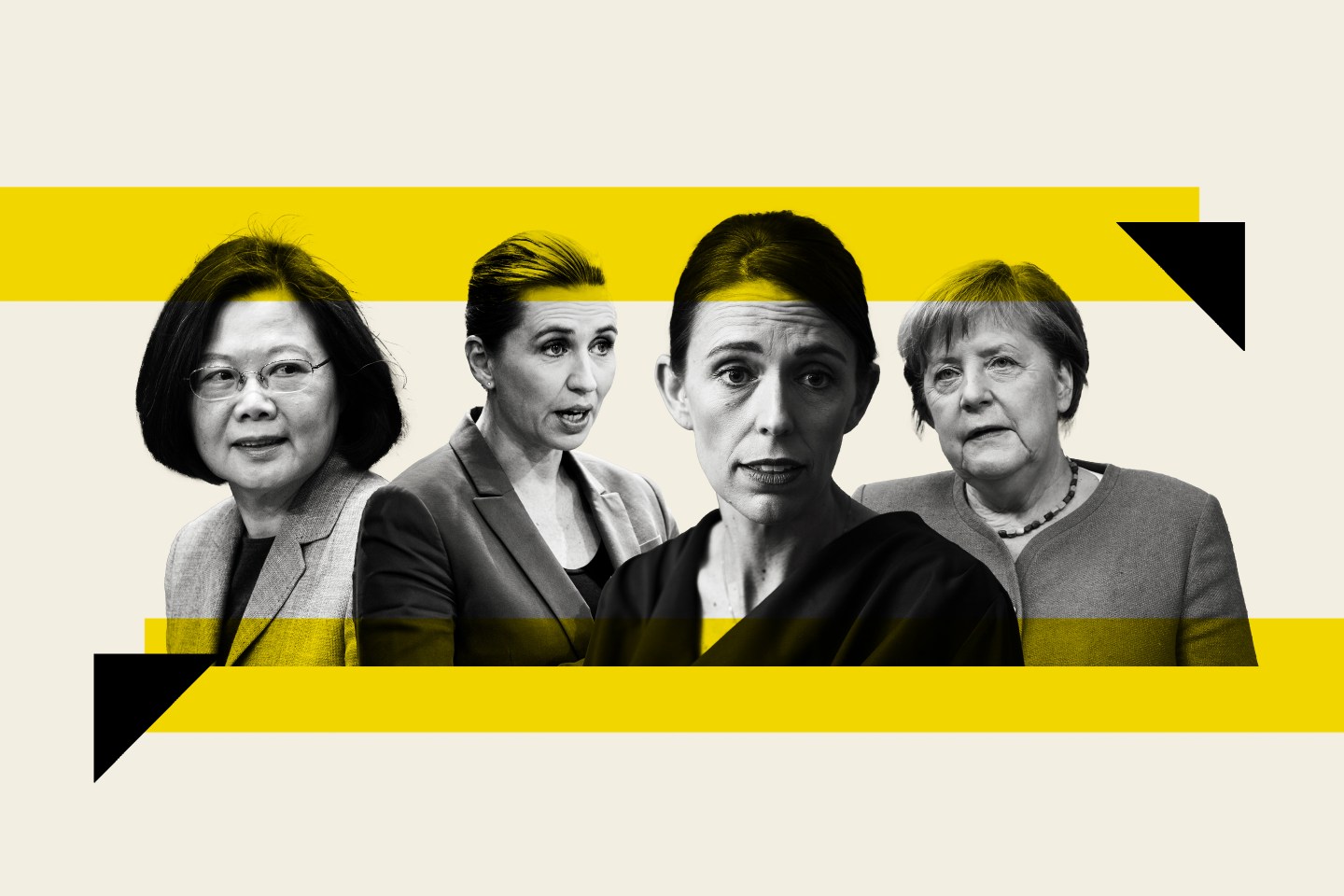 When COVID-19 surged in March, Donald Trump described himself as a “wartime president.” Emmanuel Macron of France solemnly proclaimed that “we are at war.” Rodrigo Duterte of the Philippines even threatened to treat citizens who defied lockdown orders as enemy soldiers and shoot them.

The military imagery was understandable. In response to an unprecedented threat, emergency mobilization on a wartime scale seemed necessary. The politicians knew that nations tend to rally around military heroes and war leaders, and the charisma and masculinity they seem to embody. More than half the men elected to the American presidency have either had distinguished military records or led the country successfully in a war.

Yet, today, months after the brash declarations of a war on COVID, the pandemic has shown once again that military-style leadership is poorly suited to contemporary crises. Instead, the most successful responses to COVID-19 have come from women leaders—Jacinda Ardern of New Zealand, Angela Merkel of Germany or Mette Frederiksen of Denmark—who combine public empathy with political skills and technocratic know-how. Is the age of the hyper-masculine, charismatic war leader at its end?

The human tendency to associate charismatic leadership with masculine, military-style heroism is ancient, of course. Long before the modern age, those perceived as the greatest leaders—from Alexander the Great to Charlemagne—protected their people from conquest and made glorious conquests of their own.

Democracy changed little about this perception. The great revolutions out of which modern democracies emerged were all accompanied by significant bloodshed and were led by generals who became founding fathers: George Washington in the United States, Toussaint Louverture in Haiti, José de San Martín in Argentina, and Simón Bolívar across South America.

In the 20th century, the American presidents seen as most charismatic had a macho strength associated with international conflict: the war hero John Kennedy, and his Cold War successor Ronald Reagan. But the spell they cast has worn off. Importantly, the strategy of treating any intractable challenge as if it were a foreign enemy has worked less and less well. Nixon’s “war on crime” and “war on cancer,” Reagan’s “war on drugs,” and George W. Bush’s “war on terror” produced few victories, and disastrous side effects.

Despite these conspicuous failures, climate change too is now being described with the rhetoric of warfare. Last year, former U.S. Senator John Kerry, a Massachusetts Democrat, and former Gov. Arnold Schwarzenegger, a California Republican, announced an initiative they called “World War Zero” to fight for a target of zero carbon emissions. But the news sank with barely a ripple. How do we declare war on CO2?

The COVID-19 pandemic is another crisis poorly suited to be treated as a war. “Victory” will happen when an effective vaccine has been developed, produced, and distributed. Beyond providing money to the vaccine developers and preparing manufacturing and distribution facilities, there is little that governments can do on this front except wait for the science.

China, Europe, and New York City have all shown what it means to win an initial “battle” against COVID-19: shutting down society and reducing human interaction to the point that the virus stops spreading and comes close to dying out. During the initial shutdowns, health care professionals, standing on the “front lines,” were treated as military heroes of a sort.

But these shutdowns have come at massive cost, and were followed not with victory parades but by difficult choices. How can citizens be persuaded to alter fundamental sorts of behavior over an indefinite period of time? What risks are tolerable in return for rescuing an economy?

Heroism of a different kind

In the newest phase of the crisis, it is less evident who the heroes are. Not surprisingly, the politicians most eager to claim the mantle of war leaders have performed poorly and lost public support. Donald Trump has frenetically oscillated between declaring premature victory and insisting that the entire crisis is a hoax perpetrated by his political enemies. Trump, along with Macron and Boris Johnson, has seen his approval levels drop precipitously in polls.

A different sort of charismatic leadership has proven far more effective, with women leaders shining. Ardern, Merkel, Frederiksen, and Tsai Ing-Wen of Taiwan have emphasized compassion and patience, rather than war and victory. They have not posed as commanders dispatching brave conscripts off to the front, but rather as mothers and daughters sharing the fears and privations of their fellow citizens.

Ardern has hosted Facebook Live videos from her living room, dressed in a sweatshirt, after just putting a child to sleep, driving home the point that everyone has an equal role to play in containing the virus. Frederiksen, the Danish leader, posted a clip of herself singing Danish pop songs while doing the dishes, injecting much-needed humor into the grim diet of daily news. Each of these women has calmly refused to sugarcoat the threat, or to predict easy victory in the manner of Trump. Merkel shocked her citizens near the start of the crisis when she predicted that 70% of Germans would ultimately come down with COVID-19. Most importantly, each of these women has emphasized the absolute priority of saving lives.

These approaches have won cooperation from the citizenry when it comes to wearing face masks and other behavioral changes. As a result, the countries with women leaders have had far lower levels of COVID-19 mortality than countries led by would-be strongmen like Trump, Vladimir Putin, and Jair Bolsonaro of Brazil. While New Zealand is now struggling with a new surge in cases, Ardern herself now has the highest approval ratings of any New Zealand prime minister in the last century—since the First World War, in fact.

Political charisma is an elusive phenomenon. It is usually spoken of as a personal quality. But in fact, charisma is more of a relationship. It depends on the public recognizing a special quality in a leader and feeling an intense attraction as a result. Perhaps, by the time the crisis ends, worldwide understandings of political charisma will have changed. The figure of the compassionate mother may come to have greater appeal than that of the aggressive wartime commander.

David A. Bell is a historian at Princeton University and the author of Men on Horseback: The Power of Charisma in the Age of Revolution.

This was written for Zócalo Public Square.