Medical devices are nearly impossible for patients to track. Can these companies finally fix that? 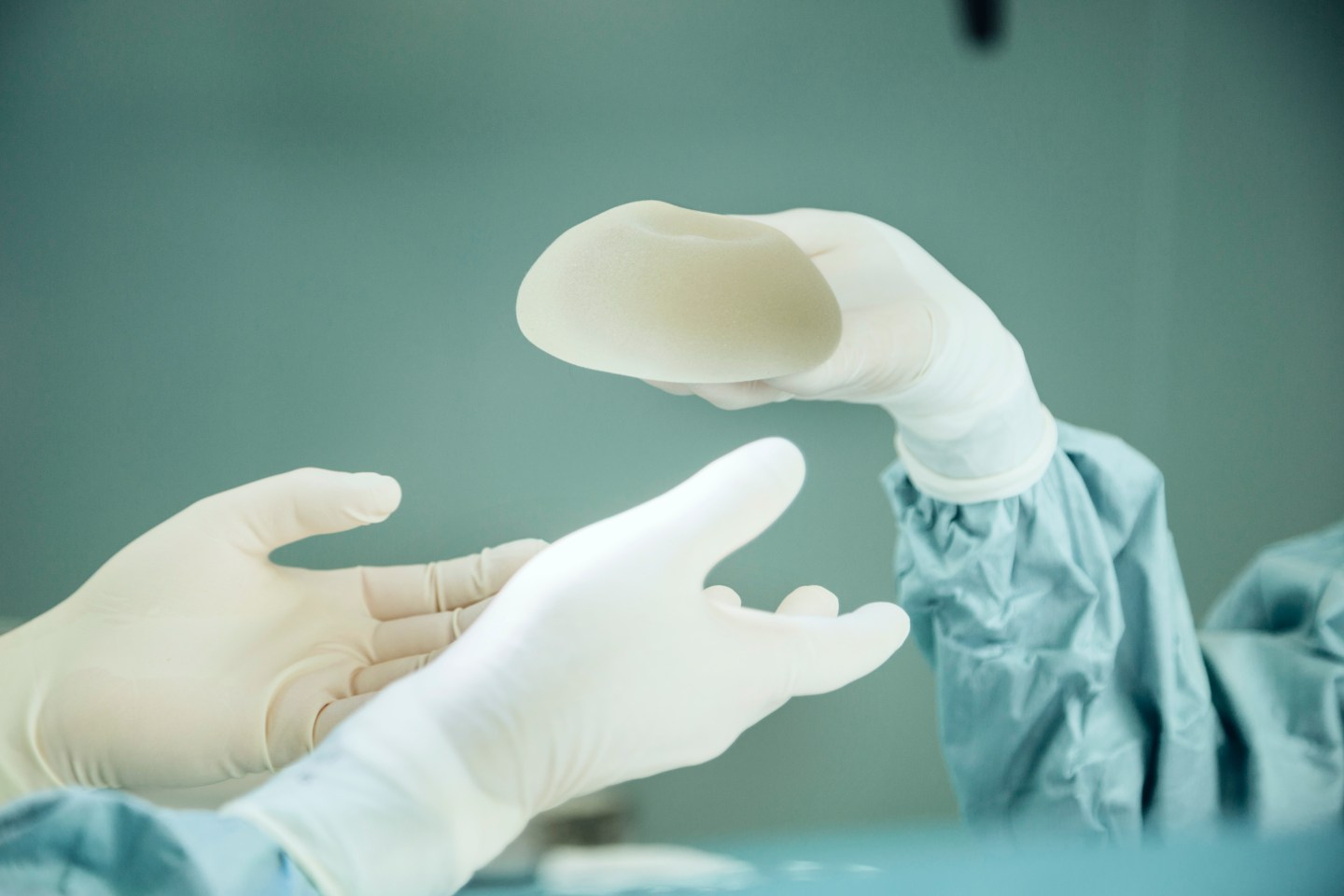 At 75, Margaret Evans has survived breast cancer, heart problems, and three knee replacements. That medical history has left her with multiple artificial body parts, or medical devices—and, like millions of Americans, almost no way of keeping track of them.

Her lack of information went from an inconvenience to a more immediate threat last year, when the U.S. Food and Drug Administration asked Allergan to recall a type of breast implant that academic studies have linked to a sometimes-fatal lymphoma called BIA-ALCL. Evans, who had gotten a mastectomy in 1991 and a silicone reconstructive implant in 2007 as part of her breast cancer treatment, first read about BIA-ALCL on Facebook and wondered if she might be affected.

But she never heard anything from the government or Allergan, and she had misplaced the little information card she got along with the implant, 12 years earlier. When she called her surgeon’s office to see if her implant fell under the recall, Evans was told, “It’s been more than five years, and we didn’t keep your records,” she says. “Something needs to be done in terms of keeping the patients informed.”

That’s a mounting refrain from many patients, not just those affected by the problems with breast implants. Medical devices, a catchall term for all kinds of artificial parts and equipment, include implants inside the body as well as machines used externally, such as pacemakers, artificial joints, and ventilators. Their sale makes up a $400 billion global industry. But, as I reported in Fortune’s recent investigation into the persistent problems of breast implants, many medical devices have been sold without adequate study or regulation—or, in some cases, full disclosure of the problems reported with them.

“More and more surgery is replacing parts of the human body—and yet in many cases, these implants are being put in where there’s been no rigorous study before approval to see whether they work,” says Sidney Wolfe, a physician and cofounder of Public Citizen’s Health Research Group, who’s been raising concerns about the safety of breast implants and medical devices since the 1970s.

Those problems have been amplified by a widespread lack of tracking systems—meaning many patients have little idea, or means of finding out, what make or model device might be surgically buried within their bodies, or if there’s something wrong with it. As several women affected by the Allergan recall told me, they received none of the alerts that are standard for recalls of cars or other, more mundane consumer products.

“Pepperidge Farm had a recall of orange crackers,” recalls Terrie Reed, a former FDA associate director of informatics, who worked on the agency’s efforts to improve the tracking of medical devices and is soon joining startup Symmetric Health Solutions. “The next day, my neighbor got an alarm on her phone that she had bought these crackers at Walmart: ‘Here’s what to look for, the UPC code and expiration date, and here’s what to do.’ That’s not true for patients.”

The toll of this lack of tracking can be deadly. More than 1.7 million injuries and 83,000 deaths worldwide have been traced back to medical devices, according to extensive reporting in 2018 by the International Consortium of Investigative Journalists.

Now various startups, government entities, pharmaceutical companies, and professional medical societies are developing more technology to digitally track the devices implanted into human bodies every day. But they have a tough road ahead.

“Patients don’t know what they have in their bodies,” says Jeremy Elias, the founder and CEO of device-tracking startup TrackMy Solutions, which Evans is using to track her implants. (Reed has served as an adviser to the company.) “They aren’t finding out about recalls. And if they are, they’re not finding out about them soon enough.”

The future of tracking your device

When Evans got her Allergan breast implant in 2007, she was given what has historically been the extent of the “tracking” of these devices: a small card, easily misplaced, with the name and long serial number of her device.

There are various efforts to digitize this information and make it easier for hospitals, doctors, and patients to share, but they are disparate and slowgoing. Starting in 2014, the FDA started requiring implant manufacturers to put “unique device identification” (UDI) numbers on devices. UDI numbers can run to more than 70 characters, but they can be scanned like bar codes and fed into electronic health records, following patients from hospital to doctor’s office.

In an interview earlier this month, Binita Ashar, director of the FDA’s Office of Surgical and Infection Control Devices in the Center for Devices and Radiological Health, told Fortune the UDI program “allows tracking of particular devices through their life cycle” and could enable the “manufacturer or others to hone in on a particular lot or model of device to be able to possibly communicate to patients more easily.”

There are still a few bugs in the system, at best. UDI numbers are long, and have yet to be fully adopted in patients’ electronic health records. Public health advocates have criticized the UDI system for being slow to roll out, or to be widely adopted by the hospitals and doctors’ offices that actually deal with the patients. And manufacturers have in some cases made the process more analog. Last year, Allergan informed hospitals and doctors’ offices about a recall of some of its implants over an “error in labeling,” saying that the bar codes on some of its breast implants “may be unreadable” by some scanners. The solution: asking hospital technicians to enter the long string of UDI information by hand. “The UDI information can be entered manually by using the human readable information,” said an Allergan notice of the recall filed with the FDA.

Reed criticizes this fix for being long and labor-intensive, pointing out that UDI numbers were “never meant to be recorded manually.”

A spokesperson for Allergan, which was recently sold to Humira maker AbbVie, did not directly address the labeling recall in an emailed response to Fortune’s questions. The company said it “has taken important steps to address the inherent challenges of tracking implants and to improve our device-tracking capabilities,” including by establishing a website for patients affected by the more serious recall last year. It also “advises all patients to keep records on their devices.”

Physicians and their professional organizations are also working on various efforts to improve the tracking of breast implants and the communication with patients. In 2018, the American Society of Plastic Surgeons established the U.S. National Breast Implant Registry in collaboration with the FDA and manufacturers, and is working with patient advocacy groups to develop it. “The idea is to collect as much information we can about implants in general, and in the near future we hope to get patient-reported outcomes from it,” says Lynn Jeffers, a plastic surgeon and the society’s president.

Meanwhile, the Aesthetic Society is beta-testing an app for patients that William P. Adams Jr., a plastic surgeon and the society’s president-elect, describes as “an implant passport” for patients, with information about their devices and another way of communicating about them with their doctors. He says the app, which has received funding from Allergan, will be widely available to U.S. patients in 2021.

Still, even when those systems come online, they will be limited to single types of medical devices. Elias of TrackMy Solutions and other startup founders think they can do better. “If Jane Doe goes and gets a breast implant, then what happens if she gets a knee replacement? And if you get a knee, usually you get a hip,” says Ryan Bass, cofounder of Patient Alerting Logistics, an early stage device-tracking startup. “It’s not realistic to expect patients to keep nine different registries and nine different sign-ins.”

Patient Alerting Logistics and TrackMy Solutions both say they have gotten interest from the FDA and some hospital partners—but they’re in early days, and will require long-term cooperation from hospitals, insurers, manufacturers, patients, and the FDA to buy into using their services. “Imagine, no one’s ever scanned anything in the grocery store. That’s where we are. And all of a sudden, in this digital world, start scanning!” as Reed puts it. “It just doesn’t happen overnight, and it requires commitment not only by government but manufacturers, vendors, and hospitals.”

In the meantime, patients like Margaret Evans will likely still have to resort to being their own medical investigators. A retired clinical social worker who used to work at a veterans hospital in Gainesville, Fla., Evans says she’s “quite comfortable calling people to track down medical information.” Which is a skill she’s needed over the past few years, to find files buried in hospital warehouses or in the records of manufacturers that sold their implants to Evans’s doctors, without ever communicating directly with the ultimate patients.

Last year, Evans eventually found a form with her breast implant’s serial number, and called Allergan to ask if that code matched the textured implants that have been recalled. It did. She’s registered that number with TrackMy Solutions and is monitoring her implant with yearly MRIs. Meanwhile, she’s also on a mission to track the other devices she has in her body, even though some doctors’ offices have initially put her off.

Earlier this month, Evans emailed me. “My surgeon who did my knee replacement in 2012 and who told me that my records were in the warehouse finally mailed me the needed info,” she wrote. “Persistence pays off!”

Editor’s note: This story has been updated to further clarify the definition of medical devices.