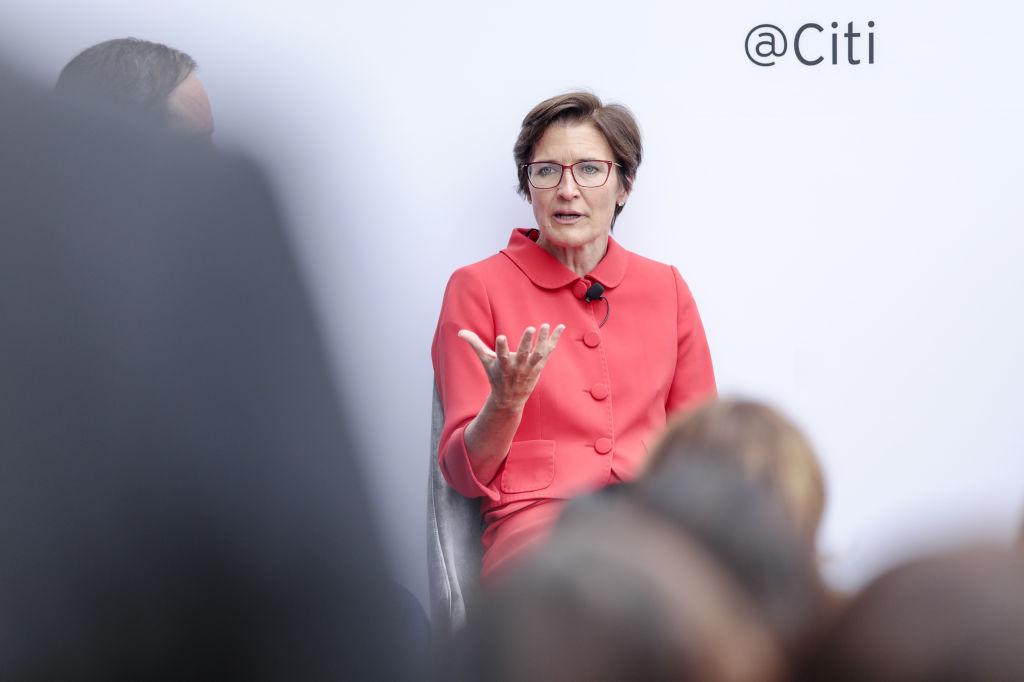 Jane Fraser, chief executive officer for Latin American at Citigroup Inc., speaks during the Milken Institute Global Conference in Beverly Hills, California, U.S., on Monday, April 29, 2019. The conference brings together leaders in business, government, technology, philanthropy, academia, and the media to discuss actionable and collaborative solutions to some of the most important questions of our time. Photographer: Kyle Grillot/Bloomberg via Getty Images
Kyle Grillot—Bloomberg/Getty Images

– Vulnerability as an advantage. For the latest installment of Fortune‘s interview series about female leadership amid the coronavirus crisis, I talked to Jane Fraser, president of Citi and CEO of its global consumer banking division. Fraser shared what data she’s monitoring (community spread, public infrastructure) and what Citi’s pandemic-era offices will look like (one-way walking routes and lots of plexiglass).

Of course, the pandemic is reshaping more than companies’ physical workspace. Fraser said the crisis is an opportunity to  “smash some of the myths of how you’ve done stuff in the past,” especially as it relates to talent. She explained, for instance, why Citi offered full-time jobs to most of its summer interns before their (abbreviated, all-virtual) programs began. It took “the stress out of the system,” she said. “This way they’ll make the most of the experience…rather than stressing about, ‘How am I able to show myself when I’m not sitting there with my manager?'”

I was especially interested, however, in Fraser’s frank reflection on her own leadership:

People do look for leadership at a time like this. Being a woman has real power and strength to it. I can be much more vulnerable in certain areas; talking more about the human dimensions of this than some of my male colleagues feel comfortable [with], and I don’t feel that’s in any way soft or weaker. I actually think it’s much more powerful. I find that I’ve been able to have a conversation with our people, across the bank, that I wouldn’t have been able to have in that same way had we not had a crisis. You can build a different relationship with the people in the organization than you’ve been able to before.

The comment is reminiscent of analysis of how female heads of government have responded to the crisis. Leaders like New Zealand’s Jacinda Ardern and Germany’s Angela Merkel have not masked the crisis as a physical war against an invisible enemy, as this NPR story points out, but have instead characterized it as a shared problem that calls for shared responsibility—with stellar results.

You can read Fraser’s full interview here—including her tips for drawing a line between the office and home.

- Hoop dreams. WNBA commissioner Cathy Engelbert joins Fortune's Leadership Next podcast this week. With live sports halted, Engelbert and her team are trying to engage the fans they already have and bring in new ones. In April, the league held its first-ever virtual draft from Engelbert’s home; the broadcast on ESPN captured the event's biggest audience in 16 years. “We need to look at the opportunities in this crisis,” she said. “And I think there is an opportunity to engage fans in a different way.” Listen and subscribe: Spotify

- Bat signal. Virologist Shi Zhengli, known as 'bat woman' for her work studying the animals, warns that the discovery of viruses like COVID-19 are “just the tip of the iceberg” and is calling for international cooperation to fight against epidemics and avoid human suffering. Bloomberg

- Under control. A new birth control gel marketed as Phexxi by Evofem Biosciences is the first non-hormonal contraceptive to win FDA approval in decades. The approval last week heralds a rare new option in the pill-dominated contraceptive market. The last wholly new type of birth control without hormones was the female condom, which got the FDA O.K. in 1993. Bloomberg

- Making the cut. The Air Force has removed the minimum height requirement for prospective pilots as it seeks a more diverse pool of applicants, particularly women. Previously, officer applicants who wished to fly had to be between 5-foot-4 and 6-foot-5. The Air Force approved most height waivers, but on paper the requirement effectively eliminated about 44% of American women between the ages 20 and 29. New York Times

- Feeling seen? Fortune's Danielle Abril reports on how the pandemic is complicating diversity efforts. “If you are a member of a group that’s marginalized or underrepresented, it’s already hard to be visible,” said Evelyn Carter, director at diversity and inclusion consulting firm Paradigm, on a panel on the topics last week. “It’s especially exacerbated right now.” Fortune

- 'America's therapist.' Brené Brown, the best-selling author and academic, was already a pop culture icon when the pandemic hit. But now her new podcast Unlocking Us is a chart-topper. It's not just that shelter-in-place orders are heightening listeners' demand for her insight into human connection. She suspects another appeal is that she’s transparent about her own limitations and struggles. Texas Monthly

- What he said. The pandemic has minted a new kind of TikTok star; women who lip-synch President Donald Trump's coronavirus comments. Sarah Cooper and Kylie Scott are two masters of the method. “The more I get into impersonation, the less funny it becomes,” Cooper says. “I’m trying to present the words as me, Sarah Cooper, as earnestly as possible.” Washington Post

With no childcare or summer camps, women are being edged out of the workforce Washington Post

Regan Smith: No swimming, no Olympics, no graduation. No complaints New York Times

"Quite a decent shake."

-New Zealand Prime Minister Jacinda Ardern, as an earthquake struck while she was on live TV.