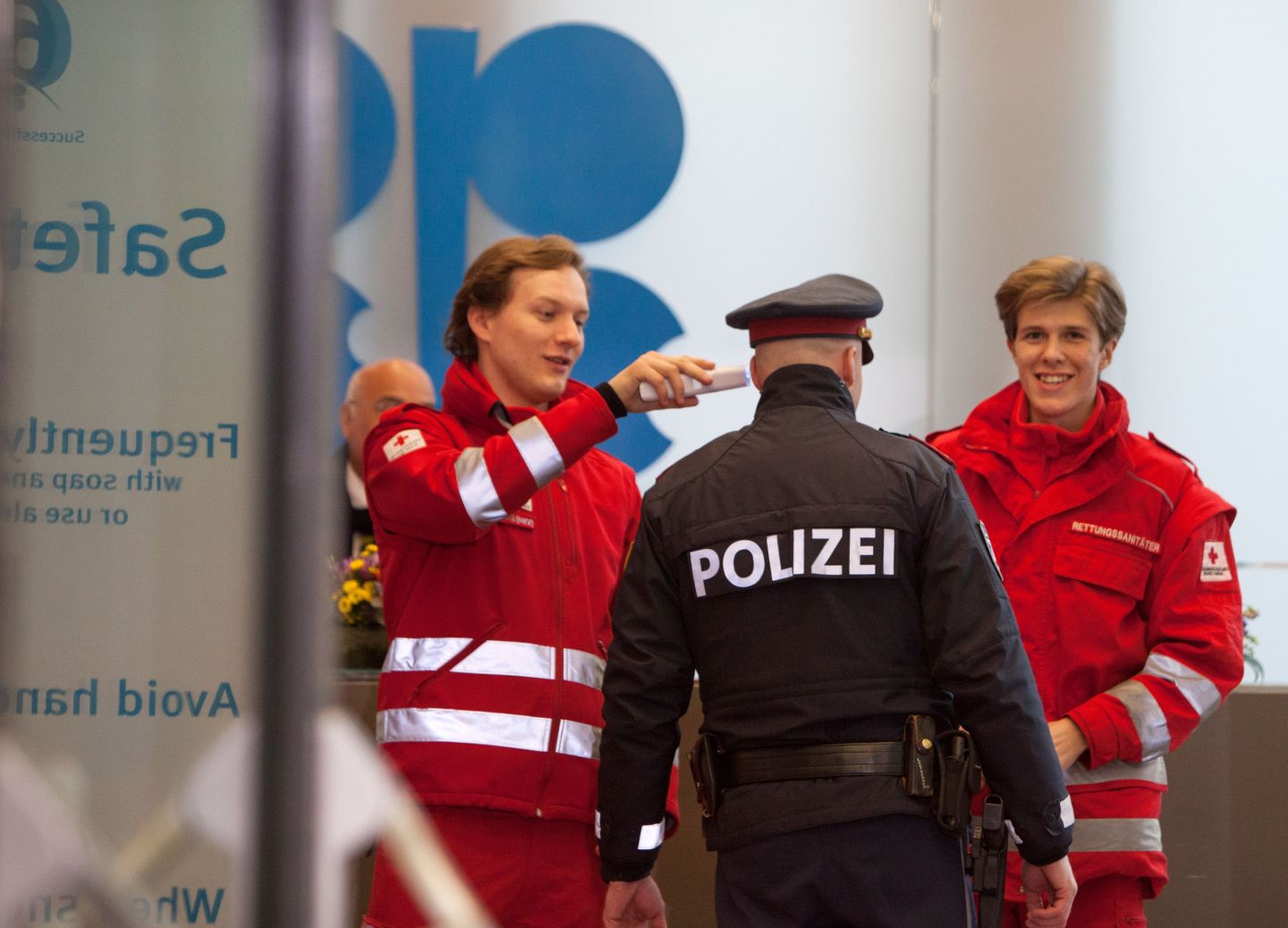 Red Cross medics check the temperature of a policeman during the 178th meeting of the Organization of Petroleum Exporting Countries (OPEC) in Vienna, Austria, on March 6, 2020. - All eyes are on Russia at the gathering of OPEC countries and their allies, with the cartel hoping to convince Moscow to back drastic production cuts to counter the effects of the coronavirus outbreak. (Photo by ALEX HALADA / AFP) (Photo by ALEX HALADA/AFP via Getty Images)
ALEX HALADA—AFP/Getty Images

OPEC may not survive to celebrate its own 60th birthday later this year. Saudi Arabia’s decision to abandon output restraint and flood the market with cheap crude signals the end for a group dubbed the world’s most successful cartel.

In a selfish bit of showmanship, Saudi Arabia, by far the biggest producer in the Organization of Petroleum Exporting Countries, tore up an output agreement that had lasted since the start of 2017. It did so because Russia, the largest of OPEC’s external allies, wouldn’t play ball and refused to make deeper production cuts to help prop up oil prices in the face of the economic devastation being wrought by the Covid-19 virus.

The kingdom had probably hoped to shock the Kremlin into coming back to the negotiating table, but that clearly backfired. The impact — compounded by the deadly virus’s continued spread — will be much more damaging for OPEC’s other members, from Algeria to Venezuela, than it will be for Saudi Arabia’s nemesis in the wider OPEC+ coalition.

The de facto leader of OPEC could have made other calculated choices before taking an every man for himself approach and starting an all-out oil price war. After all, Russia offered to extend the current output cuts beyond the end of March, and there was nothing to stop OPEC’s 13 members from agreeing further reductions just among themselves.

But Saudi Arabia seems to have decided that the OPEC+ pact, which started life as a temporary coming together meant to last only six months, needed to continue further into its fourth year. If the external partners weren’t prepared to cut deeper, then OPEC wouldn’t act either. And, since not everyone saw eye to eye, the current agreement wouldn’t be extended, leaving everybody free at the end of March to pump as much as they want, or are capable of.

Then, rather than wait and see, Saudi Arabia acted with a vengeance, slashing the cost of its crude for loading in April. Official selling prices — set as differentials to regional benchmarks — were cut by the most on record after the OPEC+ deal fell apart. With Brent trading around $30 a barrel and the discount for sales of Saudi Arabia’s key Arabian Light grade set at $10.25 a barrel, there is an ocean of $20 oil set to head for Europe next month. There have also been big increases in the volumes allocated to buyers in both Asia and on the U.S. Gulf coast.

Saudi Arabia’s monopoly oil producer, Saudi Aramco, says that it will supply its customers with 12.3 million barrels a day in April. That’s more than the company can pump out of the ground, even if it opens the taps fully, thus implying that it will draw down crude stored at home and in tanks in Japan, the Netherlands and on Egypt’s Mediterranean coast.

While the kingdom can partially offset the collapse in oil prices with the boost in volumes, most of its fellow OPEC members are much less fortunate. They are already pumping almost as much as they can.

In Libya, for example, production has been cut to near zero after a local warlord closed almost all of the country’s export terminals. A peace deal could increase it by more than 1 million barrels a day, but that seems remote. Iran and Venezuela could both boost output were it not for U.S. sanctions on their oil trade, although Venezuela’s upside is limited.

For the rest of team OPEC, Nigeria is the only country outside the Persian Gulf that can boost production by more than 100,000 barrels a day. But that’s not going to get it very far. A simple back-of-the-envelope calculation shows that lifting output to capacity would only reduce the West African nation’s losses from the price drop to $30 a barrel from $60 by 6%. For Angola, the region’s second-biggest producer, the potential reduction in its loss is just 3%. By contrast, Saudi Arabia, from its kingpin perch, could recoup more than a quarter of the oil revenue it would lose as a result of the price drop by increasing supply to 12.3 million barrels a day from 9.7 million.

This is not the first time that Saudi Arabia has cast smaller OPEC producers to the wolves. As a grouping of sovereign nations, they have little leverage over the group’s biggest producer. But the kingdom’s latest actions, in the face of an unprecedented hit to global oil demand, show its true disregard for fellow members.

When OPEC was originally formed back in 1960, part of its principal aim was “safeguarding the interests of Member Countries individually and collectively.” That goal was still paramount in the revised OPEC Statue, drawn up in 2012. So too was “eliminating harmful and unnecessary fluctuations” in oil prices. Saudi Arabia’s latest actions are diametrically opposed to those goals, and have helped cause oil prices to fall by almost 40% in a little over a week. That is certainly not in the collective interests of OPEC’s members.

The oil cartel was a useful fig leaf for Saudi oil policy when it wanted to support oil prices. Now that it wants to send them tumbling, OPEC is simply an inconvenience. The group has survived seemingly irreconcilable internal differences in the past. This one might just be a step too far.

—Business is finally starting to reckon with climate change
—How mainland China’s closest neighbors have kept coronavirus cases so low
—Plastic that travels 8,000 miles: The global crisis in recycling
—How the world’s most densely-populated region fought off the coronavirus
—WATCH: Rethinking your travel plans because of coronavirus?