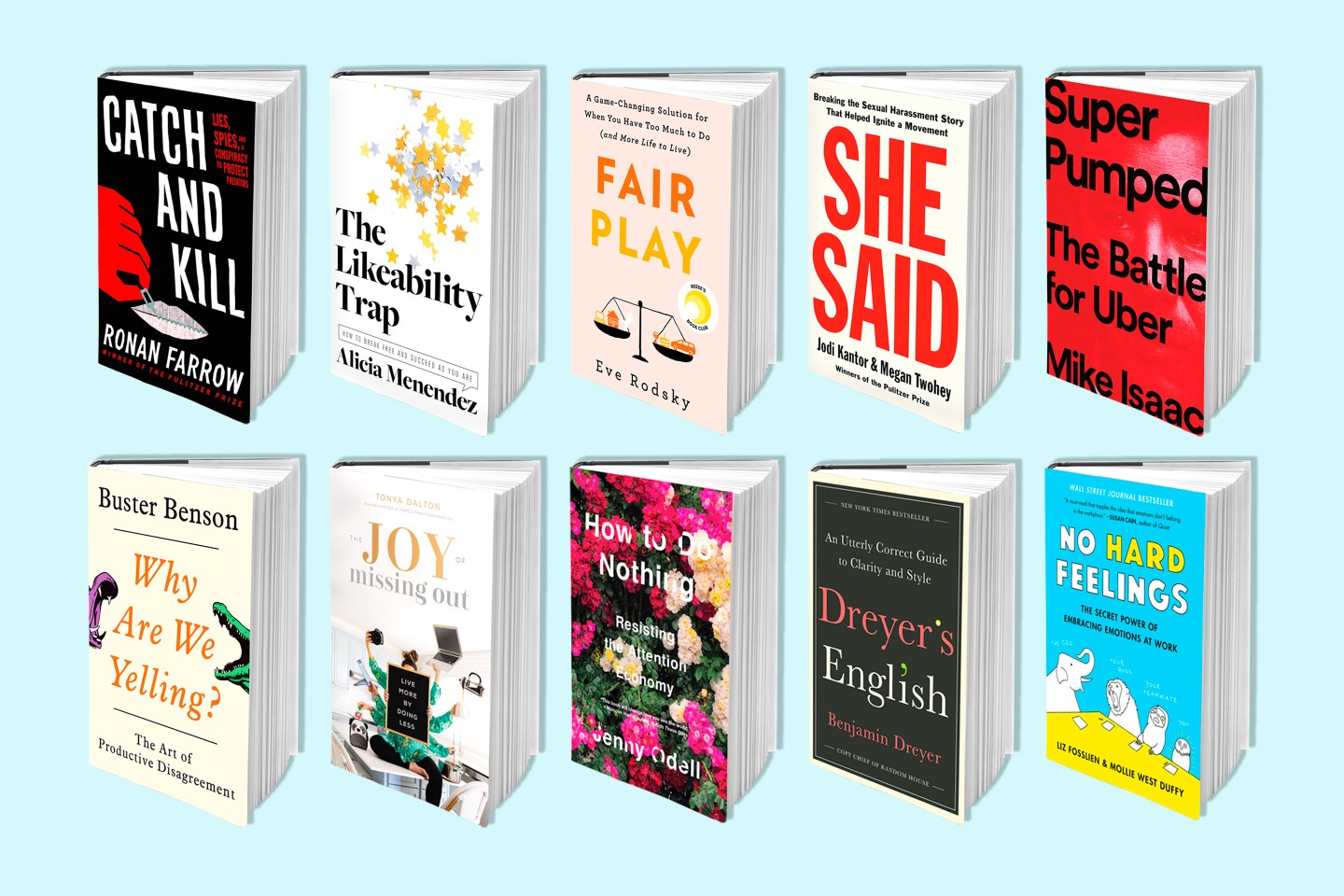 It’s been two years since bombshell reports from the New York Times and The New Yorker about now-disgraced Hollywood mogul Harvey Weinstein propelled the #MeToo movement to the mainstream. How much has actually changed since then remains hotly debated, but there has been a cultural awakening that is undeniable—reflected not only in the release of books from the reporters behind the Weinstein revelations but even more by entrepreneurs and executives who have penned works about their experiences while offering guidance to building safer and better workplaces.

Elsewhere, scammers are still stirring up trouble and captivating a public exhausted by the dismal news cycle. We’re still defining, debating, and redefining what it means to be “likable”—if that even matters. And a book on copy editing, of all things, proved to be a relatively wild success with an audience beyond wonky newsrooms and publishing offices.

These aren’t just self-help or how-to guides about how to launch your startup for the umpteenth time, or advice about networking with someone you really have no interest in conversing with ever again. These are articulate, well-researched works with concrete and valuable lessons that can be applied to your professional life.

The ‘All the President’s Men’ for a new generation.
Penguin Press

She Said: Breaking the Sexual Harassment Story That Helped Ignite a Movement by Jodi Kantor and Megan Twohey

Before October 2017, the conversation that would take over the world over the following two years to present seemed unthinkable. Then a takedown of now-disgraced Hollywood mogul Harvey Weinstein was published in the New York Times. She Said goes deep behind the scenes—in thrilling and often anxiety-inducing detail—into how journalists Jodi Kantor and Megan Twohey reported out the exposé that would win them the 2018 Pulitzer Prize for public service while also producing one of the two reports that would open the floodgates for millions of women to publicly share their stories of harassment and assault.

The book NBC News wishes would go away.
Little, Brown and Company

Catch and Kill: Lies, Spies, and a Conspiracy to Protect Predators by Ronan Farrow

The other half of the investigative journalism pieces to come out about Weinstein in October 2017 was penned by Ronan Farrow. It ended up being published by The New Yorker—but Farrow had been working on the story for months before at NBC News. The title Catch and Kill refers to the practice of (usually) tabloid newspapers buying the rights to salacious stories in order to kill them for their powerful allies. Farrow shares his experience about reporting the Weinstein story, arguing that NBC News killed his story in similar fashion, although NBC has consistently denied this. Regardless, the back-and-forth about the culture at NBC News—especially since the firing of former Today host Matt Lauer over several sexual assault allegations—continues to plague the Peacock Network right now.

Super Pumped: The Battle for Uber by Mike Isaac

Few startups of the current tech boom era have had the ever wielding and winding road that Uber has navigated over the past decade. (At least until the inevitable WeWork books are published.) New York Times tech reporter Mike Isaac does a masterly job of taking readers inside the cutthroat and often toxic offices of the company that upended taxi businesses and changed how we travel nationwide, for better or worse.

It’s time to embrace your emotions at work.
Portfolio

No Hard Feelings: The Secret Power of Embracing Emotions at Work by Liz Fosslien and Mollie West Duffy

Humans are emotional by nature—it’s as simple as that. And yet we’re all programmed like robots to assume that we can’t demonstrate emotions within the workplace. Slowly but surely, that antiquated notion is being challenged. One of the most anticipated business books of 2019 when it debuted in February, Liz Fosslien and Mollie West Duffy’s charming book isn’t just amusing. Its illustrations are both illuminating and instructive in navigating power structures, workplace situations, and other administrative tasks—all with a altruistic, humanist element. (And in true millennial fashion, if the book leaves you wanting more when you’re finished, there’s an accompanying Instagram account.)

Dreyer’s English: An Utterly Correct Guide to Clarity and Style by Benjamin Dreyer

Copy editors, the unsung heroes of newsrooms everywhere, finally get their due in Random House copy chief Benjamin Dreyer’s droll but punctilious book. This is not a how-to guide about AP or Chicago Manual style. This is a behind-the-scenes look at what it means to be a copy editor, the work they do, and why it matters. Everyone in media should read this book.

This book started with a “Sh*t I Do List.”
G.P. Putnam’s Sons

Fair Play: A Game-Changing Solution for When You Have Too Much to Do (and More Life to Live) by Eve Rodsky

Fair Play became a runaway success when it was published this fall, partially thanks to the spotlight of Reese Witherspoon’s HelloSunshine book club. But J.P. Morgan veteran Eve Rodsky also deserves the credit for her lauded examination of the work/life balance as well as the balance of gender roles in the home. Drawing upon her own experience as well as those of hundreds of both men and women about their contributions to household tasks, Rodsky offers a convincing guide to new approaches to the division of labor and better productivity in the home.

Nothing is harder to do these days than nothing.
Melville House

How to Do Nothing: Resisting the Attention Economy by Jenny Odell

There’s an adage that if you have nothing good to say, it’s better to say nothing at all. In the age of the Internet, sometimes it’s better to do nothing at all. In light of the book by Stanford professor and Internet Archive artist-in-residence Jenny Odell, that means avoiding doing things simply to be performative, to piggyback off others, fuel the echo chamber, or log face time at work. Amid 24/7 news cycles, a never-ending list of shows to binge-watch on streaming services, and the deluge of TikTok, Instagram, and whatever social media addiction comes next, Odell argues that it is attention that is our most precious resource left. But Odell is not suggesting you take a tech detox, but rather that you use tech better and smarter to contribute to causes and resources that are being depleted elsewhere, whether they be social or environmental change.

The opposite of FOMO.
Thomas Nelson

The Joy of Missing Out: Live More by Doing Less by Tonya Dalton

If social media ushered in the era of “fear of missing out,” the backlash to social media might have ushered in the “joy of missing out.” Tonya Dalton, CEO of daily/monthly planner publisher InkWell Press, might not be the obvious proponent of doing less. But when you shift your perspective, she suggests, doing less can actually be more productive because you’re concentrating on work and tasks you actually want to be doing. Not only does this streamline and simplify your workflow, but it also lays the groundwork for more balanced and harmonious experiences both at home and at work.

Be nice, but not too nice.
HarperBusiness

The Likeability Trap: How to Break Free and Succeed as You Are by Alicia Menendez

Likable. It might well be the word of 2019, especially when you take into account how often it is used to describe a select few Democratic candidates running for U.S. President. But outside of news and politics, you’ve likely heard it more frequently in your everyday life—maybe to describe someone you know, someone you work with, or maybe you. But there’s no questioning that the word has taken on feminine overtones in the current lexicon, so as journalist Alicia Menendez examines, it’s time to reevaluate what it means to be likable, the value of being likable, and frankly, how to overcome the need to be seen as likable.

Has the middle ground been lost?
Portfolio

Why Are We Yelling? The Art of Productive Disagreement by Buster Benson

Perhaps you needed this book before Thanksgiving, but given the current political climate, it’s still going to be relevant well into the new year. Twitter veteran Buster Benson’s book couldn’t have come at a more apt time in recent memory, as 2019 seems to have hit a fever pitch of discord and disagreement across social media and the political landscape. But not all hope is lost—at least probably not. Benson draws on his experiences as a product leader at the social network as well as Amazon and Slack about how to argue better. Constructive criticism and disagreement can be healthy and should be welcome in any workplace. It pushes us to succeed and contributes to better communication. But learning how to argue well isn’t always easy, and this book could help many readers take the first step to being better problem solvers.

—12 books on business and journalism to add to your fall reading list
—Meet the New Yorker selling signed copies of Philip Roth books on a street corner
—9 nonfiction page-turners to bring to the beach this summer
—Scribd’s “Netflix for books” subscription model is proving to be fruitful
—Listen to our audio briefing, Fortune 500 Daily
Follow Fortune on Flipboard to stay up-to-date on the latest news and analysis.