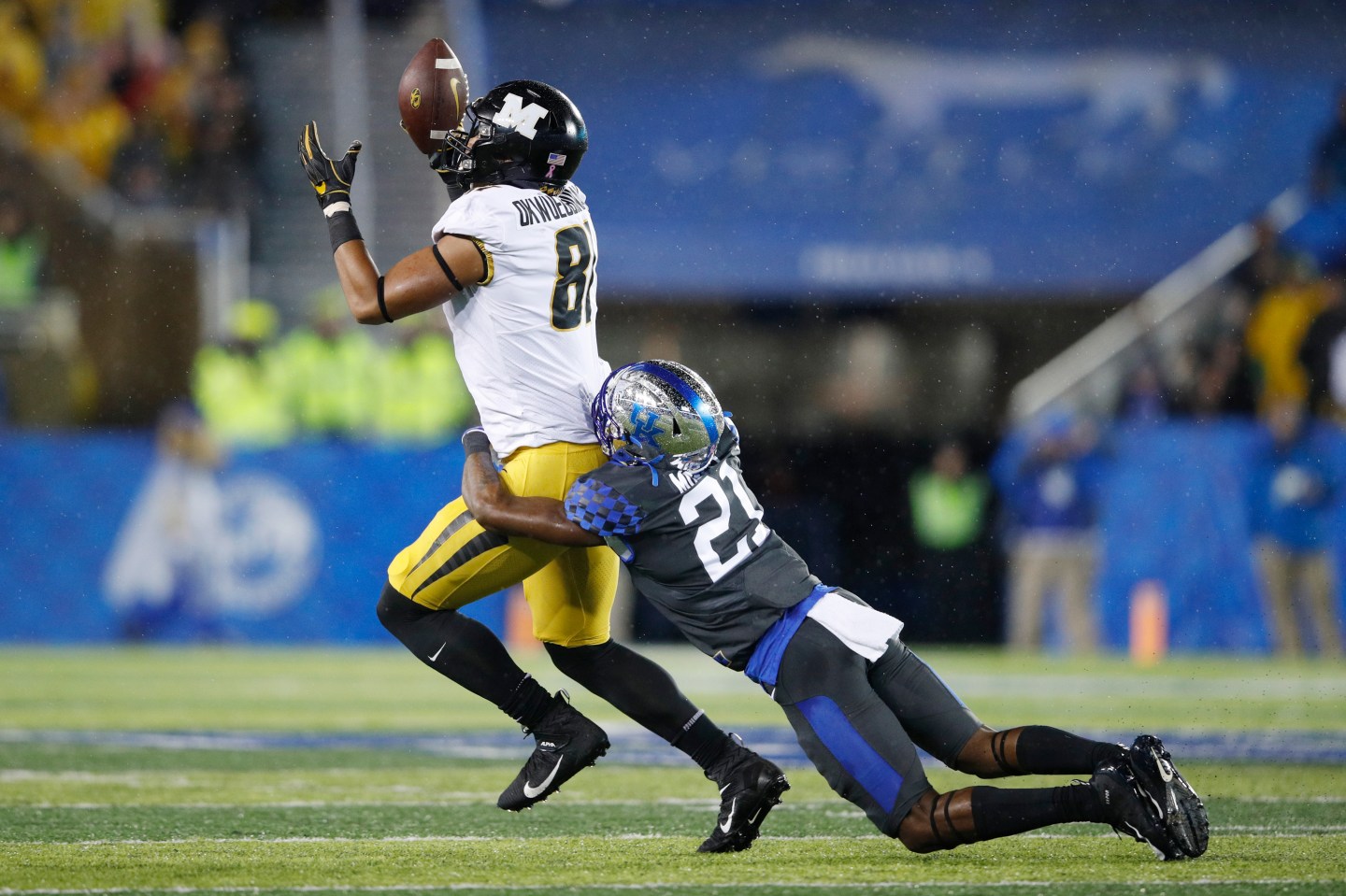 Think the NCAA’s decision Tuesday to allow college athletes to profit from their names, images, and likenesses is a done deal and will finally let them cash in?

“Unfortunately, this appears to be more smoke and mirrors as we have been suspecting for months,” Huma said, referring to the National Collegiate Athletic Association’s (NCAA) ruling. “It seems they would limit the benefit to non-cash and direct compensation.

“It is not what the people think it is,” he continued. “I wish it was.”

The NCAA is a nonprofit organization that brought in a billion dollars in revenue last year mostly due to lucrative TV rights and marketing fees, and it has been long criticized for not fairly sharing the cash with its biggest generators — the thousands of student-athletes across the country. However, Tuesday’s decision by the NCAA’s Board of Governors may signal that the amateur status it has held a close grip on to for more than a century is changing.

Although the NCAA’s decision may open the door for athletes to profit from their fame, experts say that might not exactly be the case at all.

Huma believes the NCAA rules still remain restrictive compared to California’s recently passed Fair Pay to Play Act, a law that will soon allow college athletes in California to make money off their name, image, and likeness, as well as sign endorsement deals. (The NCAA’s decision does not include endorsement deals.) Huma said the NCAA has no concrete proposals on how the students will get paid, adding that the NCAA’s position reflects a “continued state of denial.”

Instead, the NCAA board has directed its Division I (the big-time colleges and universities with the more recognizable sports programs that bring in the money) and Division II and III schools (consisting of the lesser-known, smaller-sized campuses with athletic programs that don’t generate much revenue) to begin figuring out how to modernize its rules that maintain a distinction between college and professional sports. The NCAA would like the new rules implemented by January 2021.

“I really thought there would be more clarity and depth to this,” said David Carter, executive director of the Marshall Sports Business Institute at the University of Southern California (USC). “In many respects, this is vintage NCAA saying ‘Let’s work together to best close the barn door,’ on an issue that is inevitably a changing marketplace.”

The NCAA said some change is necessary. The board said in a statement Tuesday that all changes should ensure student-athletes have the same opportunities to make money as other students, maintain the priorities of education and the collegiate experience, and that the rules are “transparent, focused and enforceable” while not creating a competitive imbalance. There could likely be three separate rules for each division since the Division I schools (which include college football powerhouses Alabama and Clemson and basketball hotbeds Duke, North Carolina, and Kentucky) make a bulk of the revenue for the NCAA.

“We must embrace change to provide the best possible experience for college athletes,” board chair Michael Drake said in a statement. “Additional flexibility in this area can and must continue to support college sports as a part of higher education. This modernization for the future is a natural extension of the numerous steps NCAA members have taken in recent years to improve support for student-athletes, including full cost of attendance and guaranteed scholarships.”

There are already differing views on what to do next.

NBA star LeBron James, who had California Governor Gavin Newsom on his show “The Shop” to sign the state’s Fair Pay to Play Act, thinks the NCAA’s decision may mark a new beginning.

James said in a tweet Tuesday that while it’s “a beautiful day for all college athletes going forward from this day on!,” he also noted that it’s “Not a victory but a start!”

But a start of what, Huma asks. In a statement released Tuesday, Huma’s group, which played a central role lobbying for the Fair Pay to Play Act, said flatly that the NCAA’s ruling “is not a green light to receive ‘compensation.'” The NCAA decision does not allow for universities and colleges to directly pay their athletes, which Huma sees as a contradiction to their ambition for players to be treated as regular students, comparable to students who may work various jobs on campus.

Huma added the NCAA is “attempting to impose conditions it now has no control over,” given California’s adoption of the Fair Pay to Play Act.

Michael Hausfeld, the lead attorney in the landmark case pitting former UCLA basketball star Ed O’Bannon against the NCAA over the use of O’Bannon’s likeness, called Tuesday’s announcement by the organization long overdue.

“Now what lies ahead is exactly having opened the door, literally a crack, how much more are they going to move that door so athletes can enter the market in a meaningful way,” Hausfeld said.

O’Bannon took legal action after he saw his and his brother’s likeness in a college basketball video game. Other former college athletes joined in, leading to a $40 million settlement in 2013 with game-maker Electronic Arts and the College Licensing Company.

Hausfeld says he’s looking to see if the NCAA will permit both individual and group licenses for athletes and if those licenses will apply to the high-priced and watched major college TV deals. He’s also keeping an eye on if the NCAA will put a cap on how much student-athletes can make and who will oversee the licensing and payments.

As for O’Bannon, he’s “elated” with Tuesday’s decision, Hausfeld said.

“At a minimum, it’s another validation of the challenge he made when he brought the lawsuits forward,” Hausfeld said.

The NCAA decision had lawmakers such as Republican Sen. Richard Burr of North Carolina tweeting Tuesday: “If college athletes are going to make money off their likenesses while in school, their scholarships should be treated like income. I’ll be introducing legislation that subjects scholarships given to athletes who choose to “cash in” to income taxes.”

But fellow North Carolinian Republican Congressman Mark Walker countered with a tweet of his own on Tuesday: “If scholarships are income, that makes them employees, not student-athletes. This isn’t about income. It’s about basic rights that every other American has to their own name.”

Walker has proposed a bill to change the federal tax code that could create an unrestricted market for college athletes to seek endorsement deals. Walker has previously said he wants to bring his bill to a vote in early 2020, hoping it could go into effect in January 2021.

He reiterated his stance in another tweet on Wednesday: “They heard us. Now their words need to become action. Instead of a #NCAA model that devalues hard work & strips athletes the rights to their own name, we need a system that encourages the dignity of work & upholds the worth of personal initiative & freedom.”

Don’t hold your breath, though, Huma said, simply adding that “the NCAA has failed on this issue once again. This is another attempt at stalling on this issue.”

Carter, the head of the Marshall Sports Business Institute at USC, agrees about the NCAA’s ongoing stalling tactics.

“That’s what I’ve been believing and saying for a long time,” Carter said. “One of the NCAA’s objectives is to lose this battle for as long as they can withstand. They want to keep kicking the can around, and you can’t fault them for that. The NCAA is sticking to its principals even though the majority of the market sees them as antiquated.”

“What this reminds me of is the NCAA publicly admitting it has a problem and it is trying to solve it, and may not be doing it as quickly as everybody likes, but that’s how it operates,” Carter said. “This group operates methodically and on its own terms, and if anybody expected a wholesale change, that would’ve been highly unlikely.”

California Democratic state senator Nancy Skinner, who co-authored the bill that was signed into law in late September, has said she is willing to make any modifications to the bill, if necessary, to accommodate the NCAA’s new rules. The California law will prohibit schools from punishing their athletes for accepting endorsement money starting in January 2023. She said she is also willing to work directly with the NCAA to help them craft their policy.

She tweeted Tuesday: “California’s leadership is a game-changer once again! The NCAA’s announcement shows promise on giving college athletes’ NIL rights. But the devil is in the details on what the NCAA means by adhering to the ‘collegiate model’ in its new rules.”

So again, what does this all mean?

“It means that we will still be talking about this past 2023,” Carter said.