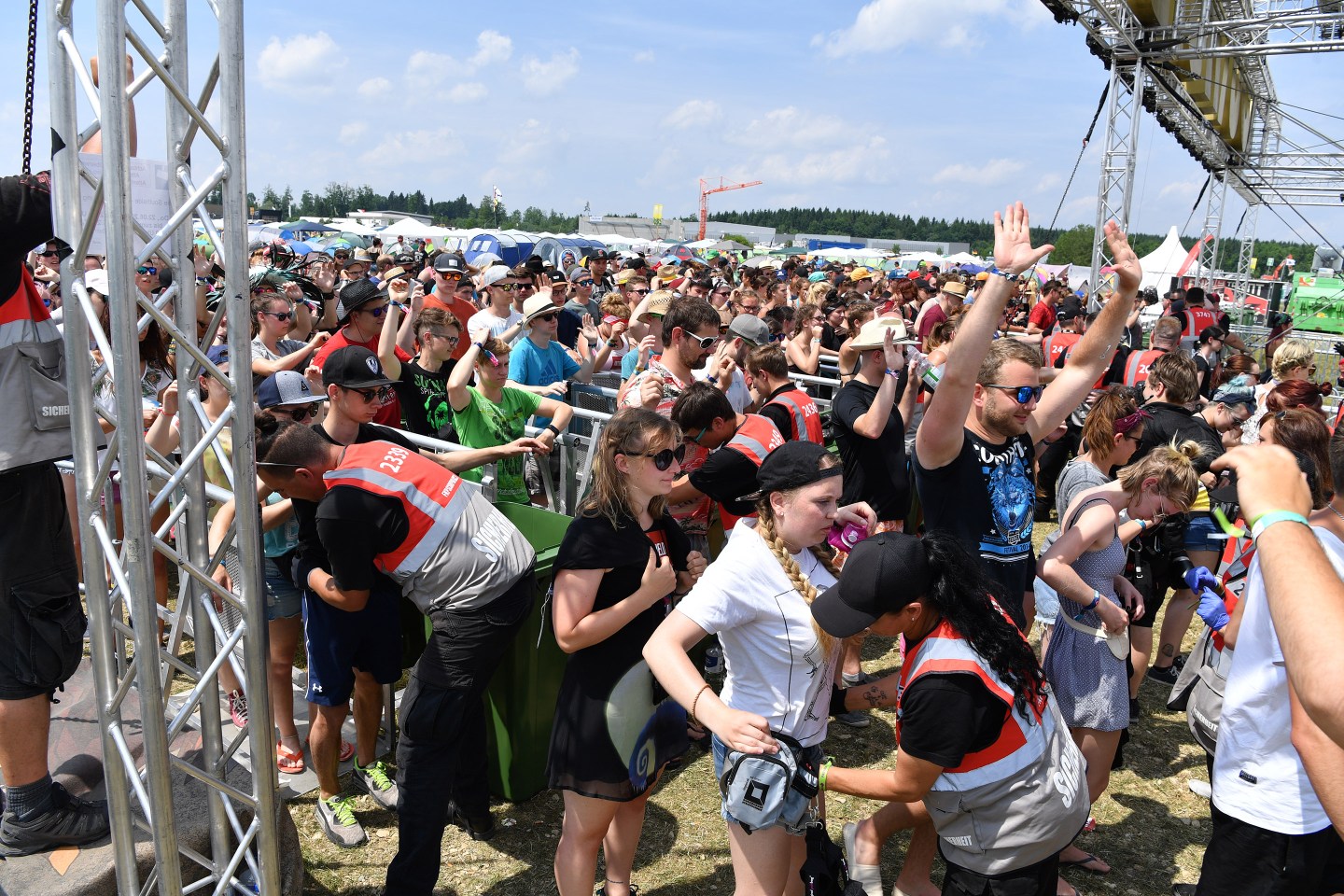 Last year, Ticketmaster announced it invested in new technology that could allow fans to enter concerts and other events without waiting in line to show their tickets. The only catch? It would mean digitally scanning your face and uploading it to a third-party company, Blink Identity, whose cameras would recognize your unique facial measurements and match them to your tickets as you walked into a venue.

Ticketmaster hasn’t put that system into place, but the specter of it was enough to alarm the digital rights advocacy group Fight for the Future, which recently launched its Ban Facial Recognition campaign to fight the use of this technology it sees as “unreliable, biased, and a threat to basic rights and safety.” One facet of the multi-pronged effort, which has the backing of organizations such as MoveOn.org, CAIR, and Greenpeace, focuses on preventing its use in the live music space, no matter what company is behind it.

Led by Deputy Director Evan Greer, the campaign enlisted the help of a number of musicians, including Rage Against the Machine’s Tom Morello, Speedy Ortiz’s Sadie Dupuis, singer-songwriter Amanda Palmer, and rappers Atmosphere, to spread the word. Greer and company followed that up by issuing a “festival report card,” which shows which events’ organizers have vowed to not use the tech. As of now, Bonnaroo, Pitchfork, Governors Ball, and Electric Forest are among those who said they won’t. Coachella, Lollapalooza, and EDC are among those who wouldn’t commit either way. (When asked for comment by Fortune, Goldenvoice—the organizer of Coachella, Stagecoach and Hangout Fest—said, “We’re not looking to add to the conversation around this story at this time.”)

So, if Ticketmaster isn’t using it right now and so many festivals are already pledging they won’t, why is Fight for the Future doing this? “It’s important that we organize this now to prevent this from becoming something that spreads quickly to live music events,” Greer tells Fortune. “The technology is becoming more ubiquitous. It’s becoming less expensive. It’s important that we do this before it becomes kind of baked in, because it’s much harder to put the genie back in the bottle once it’s out. Now is really our moment to stop it.”

Even Ticketmaster’s statement on the matter—“While we do not currently have plans to deploy facial recognition technology at our clients’ venues, rest assured, any future consideration would be strictly opt-in, always giving fans the right to choose,” they said—isn’t enough to quell Greer’s fears. “If Ticketmaster isn’t planning to use facial recognition for surveillance purposes, then why not explicitly commit to that?” she says. “Even if they only use it in an opt-in manner for entry to events, it still raises significant privacy and civil liberties concerns. And fans will still need to go through a physical search, so it’s not really saving anyone any time. It’s just an excuse to vacuum up lots of data on music fans.”

It’s the data collection that troubles those campaigning against facial recognition technology. Blink Identity, which forwarded Fortune’s request for comment to Ticketmaster, promotes more than just ease of entry on its website, touting the fact that its founders “spent the last decade building and deploying large scale biometric identification systems in the Middle East for the Department of Defense” and that their systems make it “possible to collect usable and sharable data on each person.”

At its most harmless, the tech could be used for targeted advertising in the way that Walgreens pharmacies and Tesco gas stations have done, showing you products you might be interested in and gathering data for brands. At its more insidious, it could be a tool for law enforcement agencies and the government to try to identify criminals or undocumented immigrants, Fight for the Future says.

“Once the private corporation starts collecting biometric information and that information is stored in a database somewhere, law enforcement is going to want to get their hands on it,” Greer says.

“We often hear, ‘This is about public safety.’ The reality is that collecting deeply sensitive biometric information and storing it in a database is incredibly unsafe—one of the databases maintained by Customs and Border Protection through a third-party contractor was hacked. The big [example] was the Washington Post bombshell that Immigration and Customs Enforcement had been using facial recognition searches of DMV databases in states where undocumented immigrants are able to get driver’s licenses. You can easily imagine a private company setting up a facial recognition system at a big music festival in, say, California and ICE demanding access to that data or gaining access to that data. The other obvious potential use here is targeting people for minor drug possession. When you’re able to automate surveillance at a mass scale, it dramatically increases the chances that people could be targeted, harassed or searched for fairly minor infractions that, right now, are seen as a bit of a given at these types of events.”

The other issue here is that there are very few rules in place concerning the use of facial recognition, outside of San Francisco, Oakland, and Somerville, Mass., banning it outright. Amazon, which has marketed its Rekognition system to police and government agencies including ICE in spite of evidence that it misidentifies females and people of color, is currently writing legislation that it hopes the government will adopt.

“We don’t have a meaningful way to hold these companies accountable,” Greer says. “There isn’t a policy in place that requires them to be transparent, so it’s up to artists and fans to mobilize and demand that transparency and accountability from the companies that put on the music events that we all love.”

To that end, it’s certainly plausible to see musicians refusing to play venues and festivals that implement the technology as this campaign gains more awareness and support. In terms of consumer attitudes, it’s already proven to be unpopular, with a recent Pew study of over 4,000 Americans showing that only 36% of respondents saying they trust tech companies to use facial recognition responsibly and 17% saying they trust advertisers.

“Speedy Ortiz often uses our performances to fundraise for and bring attention to issues that impact our fans and our world, but are outside of music itself. I think many bands conduct themselves similarly these days,” says Speedy Ortiz’s Sadie Dupuis, who’s set up a help hotline for anyone who feels unsafe at her shows and mandated accessible gender-neutral bathrooms at venues, among other fan-protection initiatives. “We’ll be including our stance on this [facial recognition] issue in bookings going forward, and I’m thankful to see that some of our favorite festivals have already come out against this invasive surveillance.”

Thus far, Fight for the Future’s campaign has gotten plenty of encouraging results in the three weeks since it launched, and it could expand to sports venues, malls, and other large spaces where people congregate.

“Companies that make facial recognition and biometric surveillance tech saw the music industry as a potentially huge market. It seems they may be disappointed due to the overwhelming backlash from artists and fans, as many of the largest music festivals in the world are committing to not use this tech,” Greer says. “Our broader national campaign is just growing and picking up a lot of momentum. If we’re able to draw a line in the sand here and say, We don’t want private corporations conducting facial recognition on crowds at music festivals,’ that could be really important as we have this broader debate about what role this type of technology can have in a free and open and democratic society.”

—Recap: Succession season two, episode eight
—Netflix was “creatively attuned to us,” says Martin Scorsese at Irishman premiere
—Spider-Man officially returns to the MCU
—Building Judy Garland: How Renée Zellweger was transformed into the legend
—The Good Place creator Mike Schur on the show’s final season
Follow Fortune on Flipboard to stay up-to-date on the latest news and analysis.