5 Ways Companies Can Show Their Commitment to Improving the World 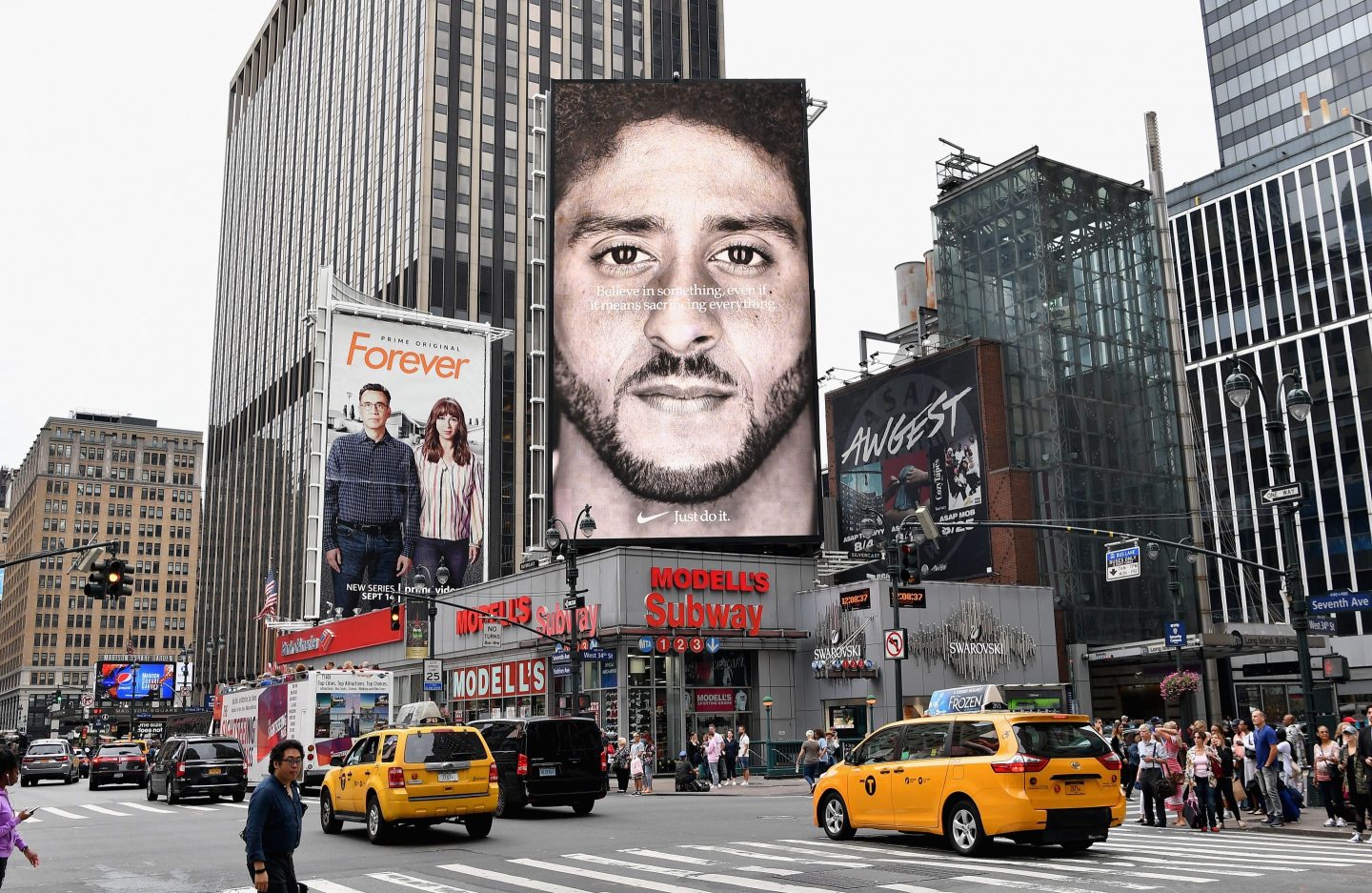 A Nike Ad featuring American football quarterback Colin Kaepernick is on diplay September 8, 2018 in New York City. - Nike's new ad campaign featuring Kaepernick, the American football player turned activist against police violence, takes a strong stance on a divisive issue which could score points with millennials but risks alienating conservative customers. The ads prompted immediate calls for Nike boycotts over Kaepernick, who has been castigated by US President Donald Trump and other conservatives over his kneeling protests during the playing of the US national anthem. (Photo by Angela Weiss / AFP) (Photo credit should read ANGELA WEISS/AFP/Getty Images)
Angela Weiss—AFP/Getty Images

This past August, a group of 181 CEOs from America’s most influential companies provided a new answer to a very old question: What, exactly, is a corporation for?

Maximizing shareholder wealth—an idea promoted by the late economist Milton Friedman—had been the singular mantra of business leaders for years. Yet the Business Roundtable Statement on the Purpose of a Corporation challenged the primacy of shareholders, adding them to a broader list of stakeholders that includes employees, suppliers, and the public itself.

While the lobbying group is hardly losing faith in the free market, its statement reflected a growing acceptance that businesses will be held responsible for their social impact—both positive and negative—as well as their bottom line. The modern CEO and CMO therefore have a duty to move beyond merely placating shareholders and toward creating models that are more inclusive and beneficial for a wider base of people.

It might seem like a forward-looking idea, but promoting “an economy that serves all Americans” is nothing new. Companies know that corporate social responsibility is more than a marketing buzzword (at least the innovative ones do) and that brands have a major role to play in shaping a society that reflects and affirms the values of consumers.

The numbers back it up. In the press release for its 2018 Earned Brand report, public relations firm Edelman noted that 64% of global consumers “will buy or boycott a brand solely because of its position on a social or political issue.” More than half of consumers polled also agreed that brands can do more to fix social problems than the government itself.

That’s because the private sector has proven it can solve problems at scale with speed, technology, innovation, and a fresh perspective. Now, corporations are applying the same tools that allow them to prosper to causes reflecting the ideals of their employees and customers.

To be sure, it’s a major challenge. Today’s consumers are more connected, engaged, aware, and empowered than ever. Yet brands demonstrating values that align with those consumers will be rewarded with purchasing loyalty as well as heightened brand awareness and favorability.

For businesses, this presents an opportunity to connect with customers as well as a risk of alienating them, or worse, inspiring a viral army of online critics. Having a clear read on the latest issues is essential. Brands that want to increase mindshare—especially with younger audiences—need to engage with the societal problems they care about, supporting awareness and the development of near-term solutions that deliver tangible results.

Several major companies have already made aggressive moves. In 2018, Patagonia announced plans to donate $10 million saved from recent tax cuts to organizations that defend the environment and find solutions to the climate crisis. The same year, despite threats of a boycott from certain conservative groups, Nike signed Colin Kaepernick to a multi-million dollar endorsement deal. And Nike went even further, planting its brand equity firmly behind Kaepernick’s stand against racial injustice in a featured campaign. Consumers applauded the move, fueling a groundswell of brand exposure as well as a surge in sales.

Through its one-for-one program, Toms has donated more than 93 million pairs of new shoes to needy kids in developing countries since 2006; the company is now involved in similar ventures with eyewear and coffee. Upstart sock company Bombas, meanwhile, has given away 10 million pairs of socks to homeless people in the U.S.

What does this mean for the future? New business models where companies are built as integral parts of movements and communities. Salesforce, for example, employs a chief philanthropy officer and embraces an inclusive capitalism ethos and 1-1-1 philanthropy model, which commits the company to giving away 1% each of its time, profits, and product. “The business of business,” says CEO Marc Benioff, “ is improving the state of the world.”

The playbook for socially responsible companies will ultimately be written by the companies bold enough to demonstrate their commitment to the values we all share.

There are five steps brands can adopt to making this a reality.

First, get off the sidelines. These are trying times, and consumers want to see brands take bold steps.

Second, commit to something and deploy appropriate resources. Once an organization is committed to a cause, it needs to put its budget and expertise toward developing and delivering solutions with consistency and transparency.

Third, rally your employees. Motivated people will amplify your values as effectively as any social media campaign will. Use your employees to get out the word, support your cause, and show that your efforts are genuine.

Fourth, be a part of the conversation—consistently. The best way to stay informed and show your sincerity is to be actively engaged in current issues through social media, blogs, print media, video, online chats, and roundtables. This allows your decision makers to connect with people whom are already committed to a cause.

And finally, build a virtuous circle. Encourage consumers to support you by supporting causes that resonate with them and their communities.

Donnovan Andrews is the CEO and founder of Overture Global.

—To protect against cyber attacks, companies must address data manipulation. Here’s how
—Punishing sexual predators isn’t enough. We need to give them a path to make things right
—There are concrete ways businesses can help lower student debt
—Opportunity zones aren’t a gimmick—they’re a legitimate investment option
—Latin America is a growing tech hub. But it needs to invest in its talent
Listen to our audio briefing, Fortune 500 Daily