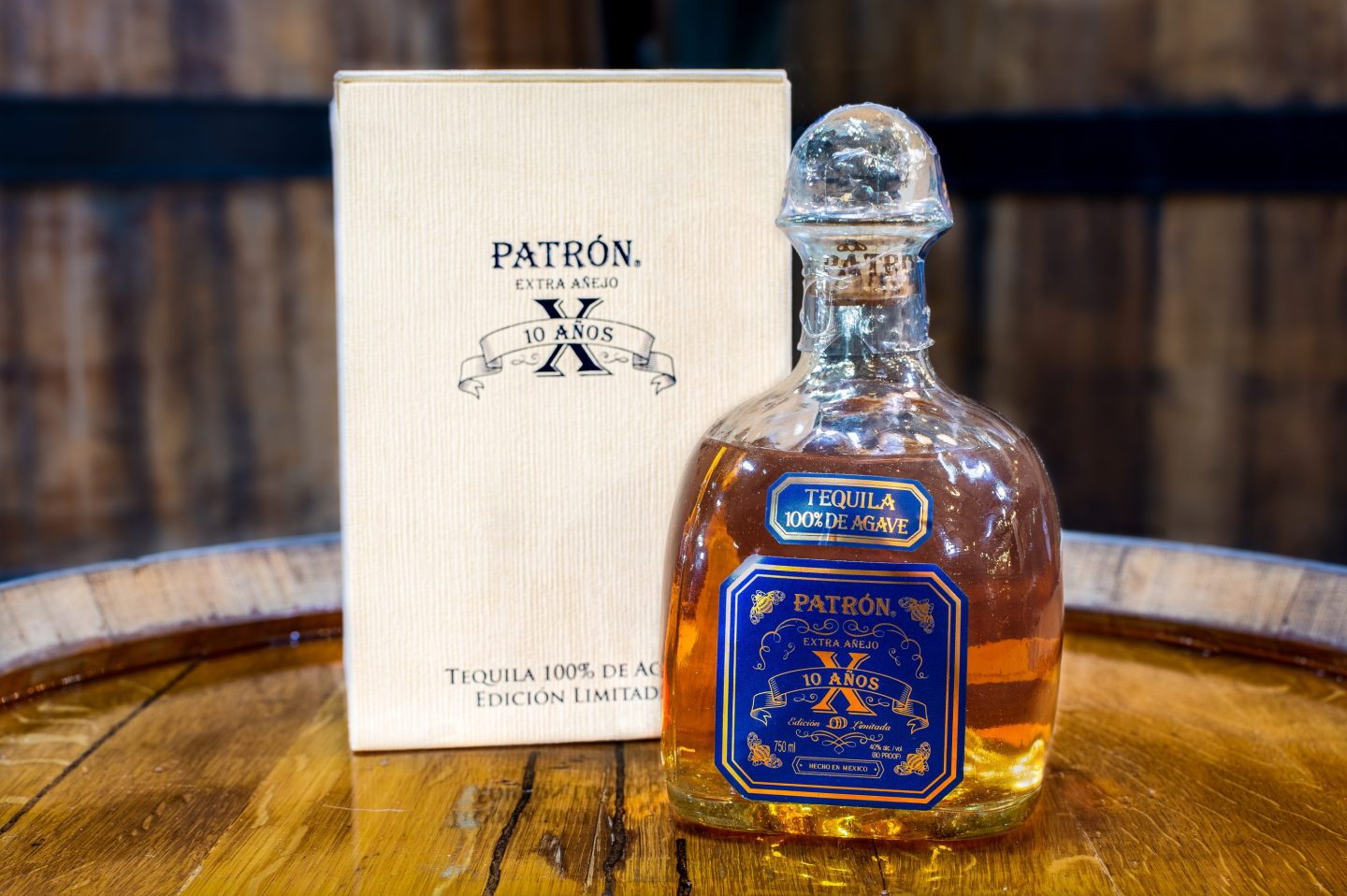 When it comes to aged tequila, it’s rare to find a very old one.

Blanco tequila, the clear liquid many of us think of first when we picture the spirit, isn’t aged at all. The next oldest tequila, reposado, is aged in oak barrels just two to 12 months. And añejo tequila, one of the oldest tequilas you’ll find, only has to be aged one year to earn the title.

Aged tequilas were once so rare that an “extra añejo” classification—the oldest classification available for the spirit—was only introduced in 2006. To earn the designation, a tequila has to be aged just three years and a day.

When it comes to aging tequila there’s one important rule: “You need to have a little patience,” says Antonio Rodriguez, Patrón’s director of production.

Today Patrón, which was purchased by rum giant Bacardi last year, is unveiling the result of its own patience: a limited-edition, 10-year-old extra añejo tequila called Patrón Extra Añejo 10 Años. It represents the brand’s oldest release yet—and it wasn’t easy to create.

Most people don’t realize that some tequila should be consumed like whisky.
Alex Pucher

Mexico tends to have dry air and hot temperatures, a lot different from the cooler climates in places like Scotland where consumers are accustomed to purchasing aged spirits.

“Ten years here is like three, four, five times more than in a cooler region,” Rodriguez says. That means that while that tequila might be only 10 years old, it has a flavor profile similar to a much older whisky.

“It’s really rare to achieve an aged tequila that can age this long, [but] you can also taste the agave,” Rodriguez says.

He says that the bottle has been in the works for almost 20 years if you take into account the growth time of the agave, which can take upwards of seven years.

For Patrón Extra Añejo 10 Años, the brand aged the spirit in oak barrels for a decade, checking on it every six months to see how its aging had progressed.

For some perspective, most of the extra añejo tequilas on the market are aged for just the minimum three years and a day, in part because of how aggressive the wood from the barrel can be on the flavor of the spirit.

“If you simply age tequila in a barrel for 10 years, the highest possibility is that you’re going to end up with a liquid that you will not recall as a tequila. It will be overwhelmed by the wood,” he says. To combat that, Patrón monitored the aging process very closely.

High-end tequila in general is seeing a bit of a boom.
Patron

Thanks to Mexico’s weather, Patrón lost over 60% of the initial volume of the spirit as part of the “angel share,” the amount of liquid that evaporates during the aging process or is absorbed by the barrel. Periodically Patrón also drained the barrels in which it was aging the liquid, merging several slightly emptied barrels into full ones.

The finished liquid also spent some time in French oak barrels, an unusual move for Patrón, but one that helped create a balanced flavor in the finished product. The tequila has hints of vanilla and caramel from all that time it spent in the barrel, but the agave flavor is still there, along with a trace of dry fruit and citrus.

And it’s coming at the right time.

Since 2002, tequila sales have grown 158%, according to the Distilled Spirits Council. One of the biggest drivers of that growth is higher-end and “super-premium” brands, which have seen an increase of 430% and 893% in volume respectively in the past 17 years.

Along with that growth, consumers have started to take an interest in aged tequilas specifically.

“The growth of tequila is moving to the aged side,” Rodriguez says, making this the perfect time to bring the aged expression to the market. Consumers have started to drink aged tequilas similar to how they might enjoy a nice whisky: neat or on the rocks and savored, which is exactly how Patrón Extra Añejo 10 Años is meant to be consumed.

And Patrón has set itself up to unveil even more aged tequilas in the future, although not the immediate one. While Rodriguez says we’re probably a decade away from seeing another 10-year-old tequila from the brand, it’s opening a new barrel room, a warehouse coupled with a cavern, where it will age liquid in the future. While not the first underground tequila aging room, it will be one of a few.

“We’ll be aging tequila in an environment that has much more stability than the surface and is close to 10 degrees cooler than the other temperatures [at which] we age our tequila,” Rodriguez says. The space doubles Patrón’s capacity for aging, which means it also doubles the amount of aged tequila it will have in future.

For now, the amount of that 10-year-old extra añejo is exceptionally limited. It’s available this month exclusively in the U.S. for $349 for a 750-milliliter bottle.