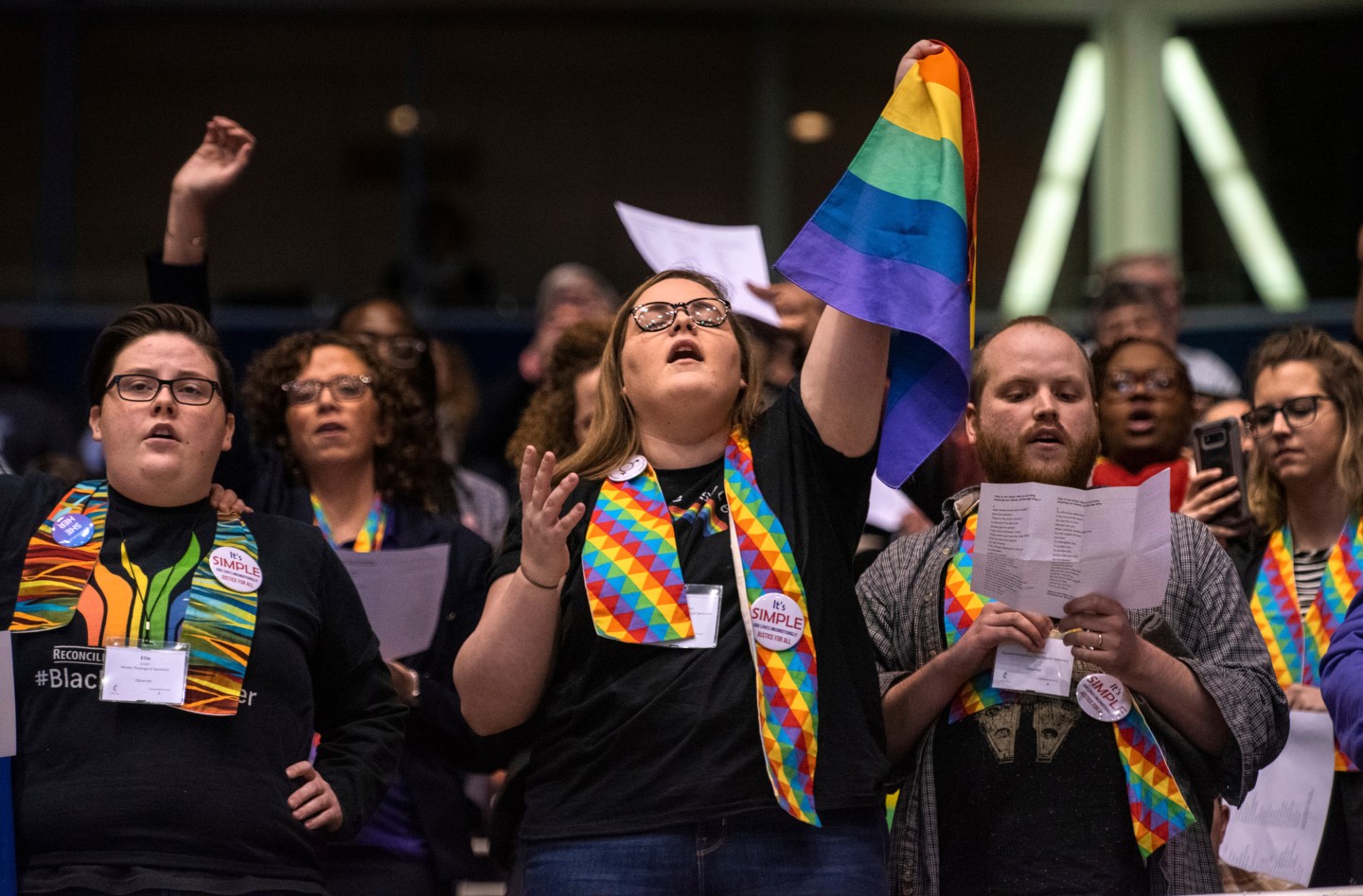 The United Methodist Church is now a church divided.

After three days of intense debate at a conference in Saint Louis, Mo., church officials and lay members voted to toughen prohibitions on same-sex marriage and banned LGBTQ people from being ordained.

LGBTQ Methodists and their allies have been pushing for the church to officially allow people of all gender identities or sexual orientations to be married and participate in church leadership for years.

The debate became even more urgent after the U.S. Supreme Court established same-sex marriage as a civil right in 2015.

According to Emma Green, a religion reporter for The Atlantic, “The denomination’s bishops, its top clergy, pushed hard for a resolution that would have allowed local congregations, conferences, and clergy to make their own choices about conducting same-sex marriages and ordaining LGBT pastors,” she reports. That proposal, called the One Church Plan, was designed to reflect the changing attitudes of the faithful around the world.

Instead, the UMC chose what has been called the Traditional Plan, which has strengthened the denomination’s teachings against homosexuality. “This is not a political or social kind of difference. It is primarily, for us, a theological difference, and the truth that the church has been raised up to share,” Keith Boyette, the head of the Wesleyan Covenant Association, tells Green. But he concedes, “I think there’s a lot of grief on all sides.”

Green’s excellent dispatch goes into more detail about the history and theology that informed the emotional debate and is well worth your time.

But it now seems inevitable that many individuals and progressive churches will be feel compelled to leave the denomination, which currently has twelve million members worldwide.

Some are already talking about a new alliance of gay-friendly churches. “It is time for another movement,” the Rev. Mike Slaughter, pastor emeritus of Ginghamsburg Church in Ohio, told The New York Times. “We don’t even know what that is yet, but it is something new.”

“Devastation,” former Methodist pastor Rebecca Wilson of Detroit told the Saint Louis Post-Dispatch. “As someone who left because I’m gay, I’m waiting for the church I love to stop bringing more hate.”

This wrenching testimony from J.J. Warren, a gay pastoral student, exemplified the emotion in the room before the final decision.

“As someone who has grown up in our church, as someone who is gay…my evangelism [on campus] has grown…They didn’t know God could love them because their churches said God didn’t.” His voice cracking, he beseeched, “We are the church together. This is the body of Christ and we are stronger together than we are apart. No plan to separate us can unite us like God’s love.”

In a two-part tweet, Rachel Held Evans author of Inspired: Slaying Giants, Walking on Water and Loving the Bible Again, offered the best advice I could find for anyone who is suffering over this decision for any reason.

And then this: “Well-meaning friends from TEC, UCC, PCUSA, and other affirming denominations, now’s not the time to offer recommendations for leaving. Now’s the time to weep with those who weep. This is/was their church. Give people space to grieve.”

Former Pepsi CEO Indra Nooyi joins the Amazon boardThere are now five women and two people of color currently serving on the online retailer’s 11-person board, a marked improvement from a year ago, when all of the then-10 directors were white; seven men and three women. The company added Starbucks COO Rosalind Brewer as a director in February, who became the second black woman ever to serve on Amazon’s board. Nooyi stepped down as Pepsi CEO in October, and gave up her seat on the board this month.Bloomberg

Lovelessness is a huge sin in the church. The four primary personalities in the New Testament- Jesus, Paul, Peter, and John- all four of them say that love is the most important thing. But the only time love really counts is when something unlovely happens.—Jeff Chu