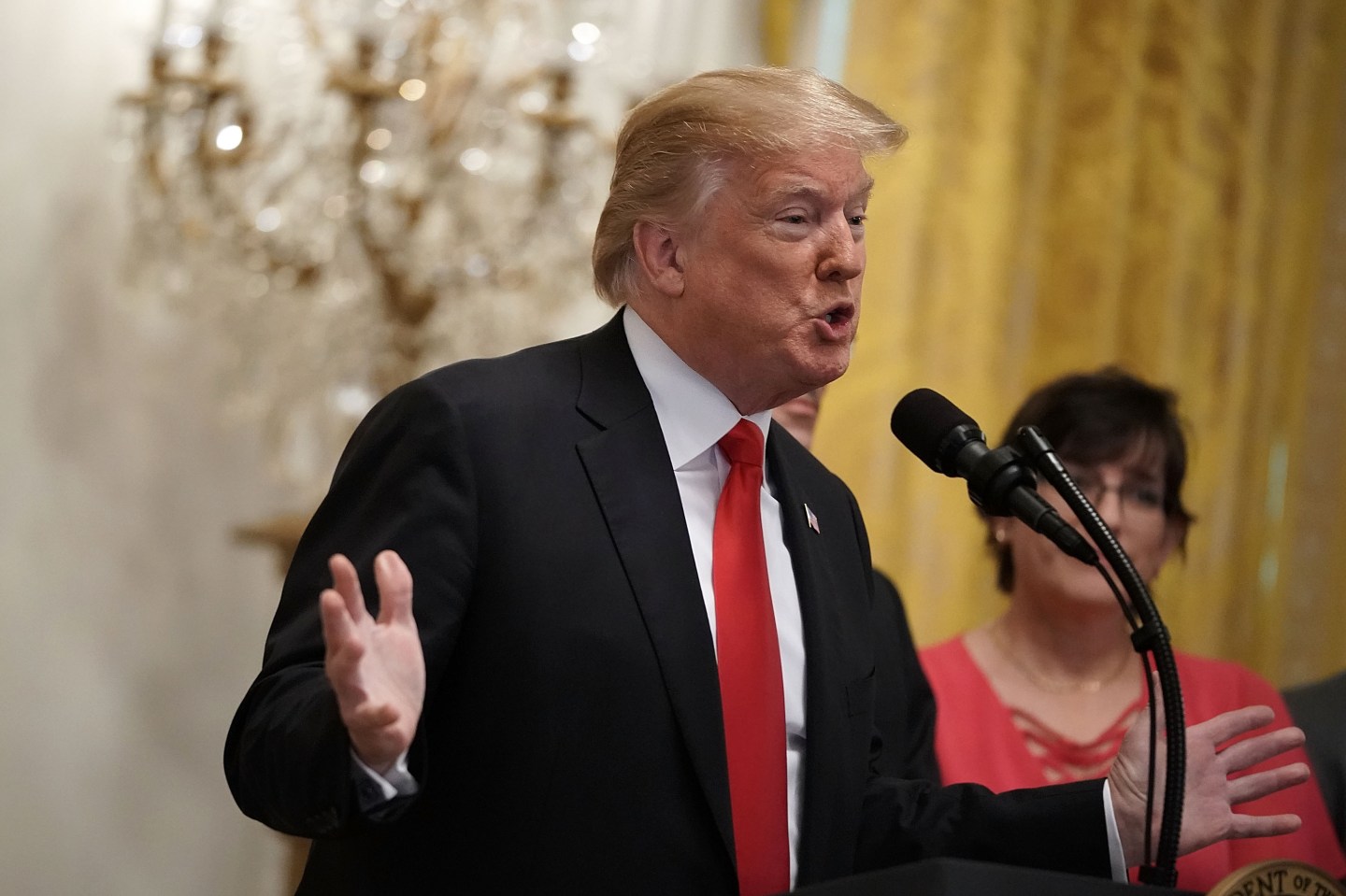 U.S. President Donald Trump’s administration backed off an assertion he made earlier indicating he persuaded Saudi Arabia to effectively boost oil production to its maximum capacity, which would have threatened to blow up a fragile truce agreed by OPEC and inflamed the Saudi-Iran rivalry.

“Just spoke to King Salman of Saudi Arabia and explained to him that, because of the turmoil & disfunction in Iran and Venezuela, I am asking that Saudi Arabia increase oil production, maybe up to 2,000,000 barrels, to make up the difference…Prices to (sic) high! He has agreed!,” Trump said on Twitter Saturday.

But in a statement Saturday evening, the White House said King Salman bin Abdulaziz affirmed that Saudi Arabia has 2 million barrels a day of spare production capacity “which it will prudently use if and when necessary to ensure market balance and stability, and in coordination with its producer partners, to respond to any eventuality.”

The White House statement aligned with one by the state-run Saudi Press Agency saying that the king and Trump, in a phone call Saturday, discussed efforts by the oil-producing countries to compensate potential shortages in oil supply. The two leaders stressed the importance of maintaining oil-market stability, according to the report. The agency didn’t say the leaders agreed and didn’t make any reference to 2 million barrels.

Iran Oil Minister Bijan Namdar Zanganeh said any production increase above limits agreed to by OPEC would “breach” the deal, according to a letter he sent to OPEC President Suhail Al Mazrouei and distributed by the Iran Oil Ministry’s news service Shana. OPEC should reject the U.S. call for a production increase which is “politically motivated against Iran,” he said.

The telephone exchange is another sign of how U.S.-Saudi ties have improved under Trump compared with the Obama administration, which alienated the kingdom by seeking a nuclear deal with Iran. Trump last year chose Saudi Arabia for his first foreign trip. Since then, the two governments have announced hundreds of billions of dollars worth of contracts, with Trump openly bragging about how many U.S. jobs the Saudis were helping to create.

If the Saudis had agreed to Trump’s request, “that means he is calling on them to walk out from OPEC,” Iran’s OPEC governor Hossein Kazempour Ardebili, said in an interview. “There is no way one country could go 2 million barrels a day above their production allocation unless they are walking out of OPEC.”

At a meeting of the Organization of Petroleum Exporting Countries in Vienna last weekend, Saudi Arabia — the group’s largest producer — joined other members in agreeing to scale back its over-compliance with output cuts that have been in place since the beginning of 2017. Saudi Energy Minister Khalid Al-Falih indicated the group’s action would add nearly 1 million barrels a day to the market.

Brent crude, the global oil benchmark, topped $80 a barrel in mid-May, the highest level since November 2014. It closed Friday at $79.44 a barrel.

U.S. retail unleaded gasoline prices, including taxes, averaged $2.833 a gallon for the week ended June 25, according to the nation’s Energy Information Administration. That’s up about 55 cents from the same period last year, at a time Trump’s Republican Party is trying to hold on to its majorities in Congress in the November midterm elections.

If Saudi Arabia were to respond to Trump’s request, it would stretch spare production capacity to the limit, meaning that any supply outage could have an out-sized effect on oil prices. It would also likely aggravate other OPEC members, such as Iran and Venezuela, which initially sought to prevent any increase as OPEC, along with allies led by Russia, headed into their Vienna meetings earlier this month.

“We will be in uncharted territory,” Amrita Sen, chief oil analyst at Energy Aspects Ltd. in London, said. “While Saudi Arabia has the capacity in theory, it takes time and money to bring these barrels online, up to one year,” she said.

Oil analysts and consultants nonetheless think the kingdom can produce more than 12 million barrels a day in an emergency through a so-called surge, in which oil fields are depleted beyond what engineers consider a reasonable rate. In addition, Saudi Arabia shares with Kuwait a so-called neutral zone that hasn’t been used for the past couple of years and can pump as much as as additional 500,000 barrels a day.

“Saudi Arabia can use some of its stocks to boost exports, visible to the U.S. president, while it takes time to ramp up operating capacity,” said Olivier Jakob, head of Swiss-based consultant Petromatrix GmbH.

Trump earlier this month blamed OPEC for oil prices being too high, reprising comments he made on Twitter in April. At meetings in Vienna on June 22-23, OPEC and its allies cobbled together a delicate accord in order to satisfy some producers, like Iran and Venezuela, which wanted to limit output, and others like the Saudis, which sought to ease away from the supply cuts.

The curbs were intended to help drain a global oil glut, a goal that has largely been achieved, though supply disruptions are now adding pressure to prices. Venezuela is in the midst of an economic crisis, which has caused oil production to plummet. In Libya, where a dispute over control of key ports has hindered output, the Arabian Gulf Oil Co. on Saturday halted 220,000 barrels a day of production, according to a person familiar with the outage.

Trump’s administration in early May said that it would renew U.S. sanctions on Iran and has sought to reduce other foreign buyers’ purchases of Iranian oil.

“I guess the Saudis want to give the confidence to Trump to go very hardcore on Iran,” tweeted the oil market’s most vocal bull, commodities hedge-fund manager Pierre Andurand. “It seems that Iranian regime change is the priority number 1 for the Saudis.”