‘Fake Refugees Get Out.’ How South Koreans Are Channeling Trump 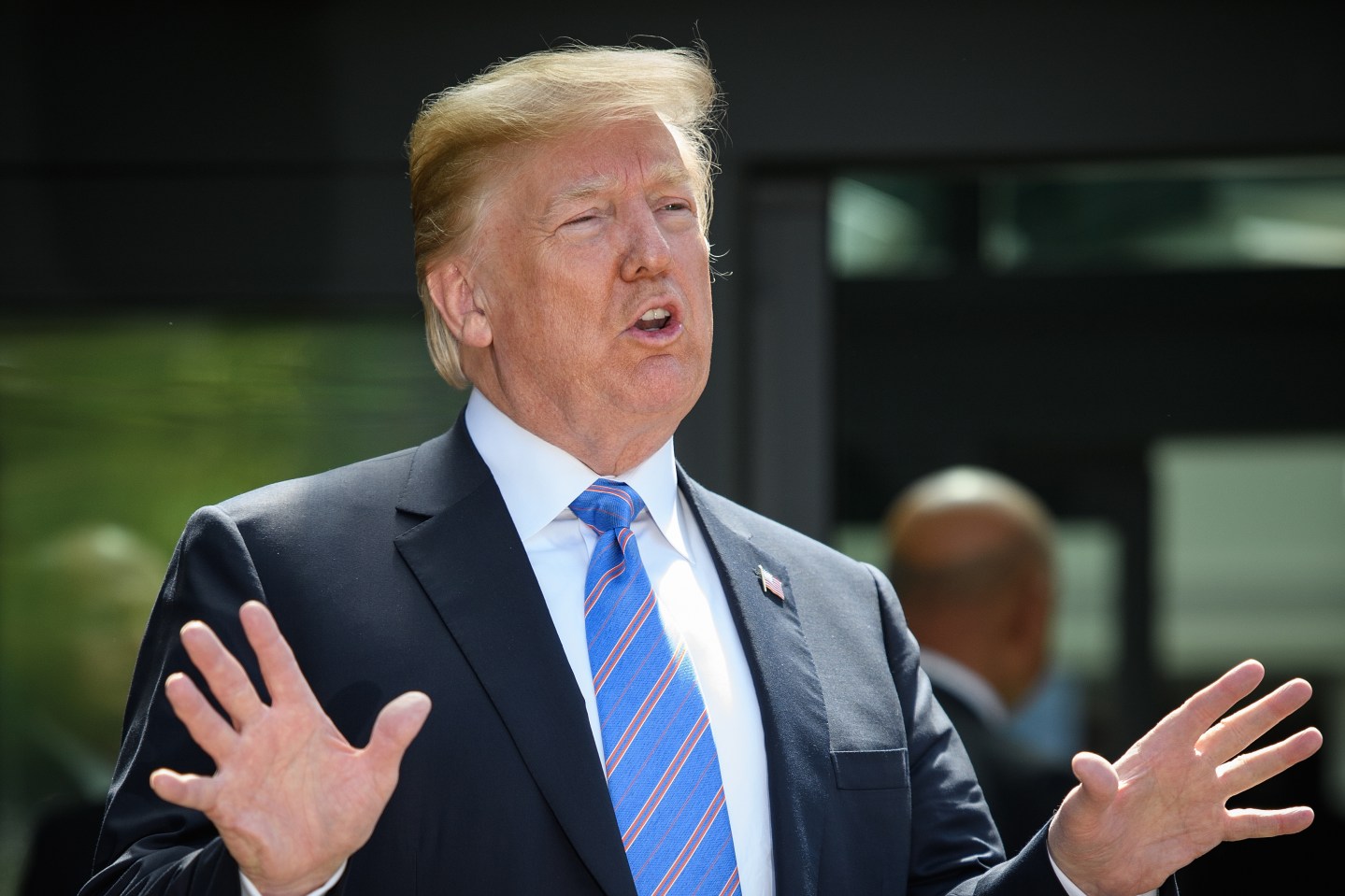 LA MALBAIE , QC - JUNE 09: US President Donald Trump leaves after holding a press conference ahead of his early departure from the G7 Summit on June 9, 2018 in La Malbaie, Canada. Canada are hosting the leaders of the UK, Italy, the US, France, Germany and Japan for the two day summit, in the town of La Malbaie. (Photo by Leon Neal/Getty Images)
Leon Neal—Getty Images

On the South Korean island of Jeju, a tourist hotspot famed for blue waters and sandy beaches, Lee Hyang is angry.

The target of her wrath? More than 500 asylum seekers from war-torn Yemen looking for a safe place to live and work.

Lee, who leads a local group demanding the Yemeni nationals be deported, believes outsiders compete for jobs and pose a threat to local safety. The refugees she saw at the immigration center looked “really scary,” she said. She praised the U.S. president, who won a victory this week when the Supreme Court upheld his ban on visitors from seven countries, including Yemen.

“Donald Trump is a true patriot,” Lee said. “He says, ‘America First,’ and really puts his people first. That’s what our president should do too, instead of thinking of other people like these Yemenis.”

The asylum seekers in Jeju have sparked an uproar in South Korea, mirroring immigration debates in the U.S. and Europe. One group opposed to letting them stay has posters describing the Yemenis as “fake refugees” and urging them to “get out.” An online petition calling for their dismissal has been signed by more than half a million people over the past 15 days.

So far, President Moon Jae-in’s administration has adhered to the 1951 UN Convention Relating to the Status of Refugees allowing people to apply for asylum. The government was giving out work permits in sectors where locals won’t lose jobs, such as agriculture or stock breeding, and was helping with food and medical services while also tightening security measures, government spokesman Kim Eui-keom told reporters this month.

“There are worries and concerns being expressed coming from the local Jeju provincial residents, and regardless of whether Yemeni refugees are actually threatening, the government is taking the measures that it can,” Kim said.

South Korea only has a few immigrants among a population of about 51 million, and just 14,000 from the Middle East. Asylum applications soared to almost 10,000 last year from a couple hundred a decade ago, according to Justice Ministry data.

Hussein Algithi, one of the Yemeni asylum seekers, said immigration officials in Jeju suggested they stay indoors as much as possible while their applications were being processed.

“They see our faces, and we don’t look like them,” Algithi, dressed in a blue, checkered button-up shirt and black jeans, said of locals. “They don’t like us because we are different.”

Algithi and about 30 other Yemeni men are staying at the Olle Tourist Hotel, a narrow building sandwiched between a small convenience store and a run-down karaoke room. As many as six of them usually cram into a room. On Thursday morning, the entrance was packed with young men chatting with hotel manager Park Min-jung, whom they call “Umma,” or mom.

“I see the way people look at them when they’re smoking outside in front of the hotel, and there’s fear in their eyes,” Park said. “But they’re not scary to me at all. They remind me of my two sons — if they’re fleeing war somewhere, I’d want someone to give them a place to sleep and eat, too.”

The Yemeni arrivals flooded into Jeju because of the tourist destination’s policy of allowing foreigners visa-free entry for as many as 30 days. Many arrived from Malaysia, after the expiration of a 90-day no-visa stay there. A new direct flight to Jeju from the Malaysian capital of Kuala Lumpur helped.

The Yemenis are fleeing what the United Nations has called “the worst man-made humanitarian crisis of our time.” Yemen has been ravaged by a three-year civil conflict that has the country fighting a growing cholera epidemic and veering toward famine.

“I came to Korea to be safe, to start a good life, to find a job, and freedom,” said Omar Hassan, 39. “My country is at war right now. I need to escape the war.”

The United Nations High Commissioner for Refugees estimates the world is seeing its highest levels of displacement on record, with 68.5 million people forced from their homes. Yet as more refugees from conflict zones like Syria and Yemen travel to different countries, the backlash against immigration has only increased.

“The Trump administration’s anti-immigration policy has been used as an excuse for many conservative factions opposing those seeking asylum in Korea,” said Shin He-inn, senior public information associate at UNHCR-Korea. “They use it as a reason to say, ‘Look America’s not doing this, Europe’s not doing this, why should we?’ — and that’s misleading. Worldwide, countries accept hundreds and thousands of refugees each year.”

One of the Yemenis in Jeju, Abdo Ahmed, said he and others picked South Korea because of their familiarity with Korean cars, dramas and music.

“My country is devastated: there is no water services, electricity, communication, and 80 percent of the population is below the poverty line,” Ahmed said. “I only have one meal every 24 hours.”

Not all Koreans are pushing back. Ahmed said they’ve received help with food and accommodation from churches, American and Canadian activists, Jeju residents and others in South Korea. One lawmaker with Moon’s Democratic Party, Park Ju-min, introduced legislation to protect the asylum seekers for at least a year while their applications are processed.

Most of the arrivals have filed asylum petitions — 504 males and 45 females so far — and are waiting to hear back from the government. The immigration office of Jeju on April 30 prohibited the Yemenis from traveling outside the island. And on May 1, it removed Yemen from the list of countries allowed visa-free entry.

South Korea had 7,737 asylum seekers between January and May this year, according to the Justice Ministry’s press office. Only 47 — or 0.6 percent — have been granted asylum, including three from Yemen.

Koreans aren’t used to people with different customs and cultures “because all we know is us,” said Shin Kang-hyob, an activist at the Jeju NGO Network for Refugee Rights. “We’ve been getting complaints from local residents that we’re helping criminals. They keep calling them ‘fake refugees’ without bothering to hear their story.”

Protests against the asylum seekers are planned for Saturday in both Seoul and Jeju. And by the looks of things, public opinion won’t change quickly.

Lee, the local activist, said she was intimidated by the 40 to 50 “really well-built” men she recently saw gathered at a Jeju immigration center.