CNN’s ‘United Shades Of America with W. Kamau Bell’ Is Back And Ready to Listen 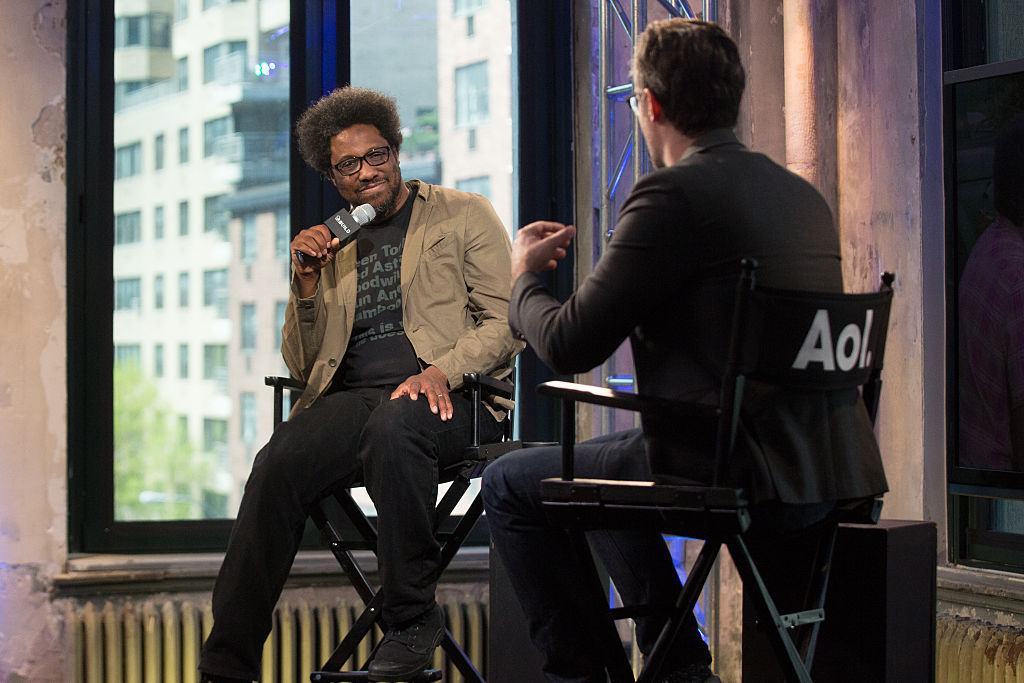 CNN’s Emmy Award-winning United Shades of America with W. Kamau Bell is back on the air for its third season.

The eight-part docuseries follows the comedian as he visits communities around the country, deftly deploying his unique brand of humor to explore issues of race, history, and the lived experiences of people who don’t typically make the news. But even at moments that could have been profoundly confrontational, Bell has consistently delivered more light than heat, and a master class in having “uncomfortable conversations.”

This year, Bell says to expect more of the same.

“I think that Americans are tired of manufactured conflict,” he tells raceAhead. “This is not going to be a season of my sitting down with an evil villain or ‘bait and switches’,” the kind of drama television likes to provide. “This is going to be me talking to interesting people whose voices aren’t heard enough.”

There were some potentially villainous moments even in the first season, which began airing in 2016.

The series opened with “The New KKK,” in which Bell met with actual Klan members in full hooded regalia by the side of a dark, country road. He even attended a “cross-lighting.” In addition to being gutsy, it established Bell’s ability to manage substantive conversations with people who believe horrific things without flinching or pandering.

But it was a different time.

“We didn’t realize how lucky we were that [season one] happened during the last year of Obama,” he said, a time when white supremacy felt less like an active threat. “We could really pick and choose what we wanted to talk about then,” he says.

By the time that season two rolled around, it felt like the country was on fire.

“With Trump offending so many people and saying so many outrageous racist, sexist and ableist things, it was like the news was handing out homework assignments,” he says.

Bell talked to immigrants, refugees and advocates, explored Chicago gang violence, visited Muslims in small town America, and even headed to coal country. All vital stuff, but still a laundry list of Trumpian talking points. At some point, he says, “it got exhausting trying to keep up with the news.”

Bell, who may be best known for his comedy, has excelled in the real world, as he stepped away from the relative detachment of the stand-up stage to meet people where they are and as they are, in the middle of their sometimes messy lives.

It’s a transition that many who speak from a position of authority struggle to achieve.

Bell’s secret is empathy. “I’ve learned that the more I can make it clear to people that I’m there for them, that I’m lucky to be there with them, it works,” he says,“and not that they’re lucky to be on TV with me—no, no, no.” The crew have become adept at making regular folks feel comfortable. “We don’t put the show before someone’s feelings and concerns.”

And, as a comic who specializes in sociopolitical content, he also comes prepared. “The show has taught me that I have a pretty good capacity to sit and listen,” a necessary first step to participating a tough conversation. “Part of being a standup comic is being an active listener- reading the room and paying attention to everybody,” he says.

But that can be hard to swallow for some. Bell got some flack for his interview with white supremacist Richard Spencer, in part, for talking to him at all.

“Look, I’m not gonna act like I’m not always second guessing myself on everything,” he laughs. “But people complained that I was giving him a platform and normalizing him. I reject that wholeheartedly. These racist ideas are in the White House now, we have to talk about them.”

Part of his frustration is that the series is filmed well in advance, so much of the news about Spencer—like when the white nationalist got sucker-punched, for example—happened months after the United Shades crew had come and gone. “Look, I was never going to punch the guy, but I would have brought it up,” says Bell. And he’s braced for similar dissonance this year. “We did a whole thing about HBCUs without knowing that Beyonce was going to claim them at Coachella,” he laughs.

But as a long-form documentary series, Bell’s commitment to shrugging off a news peg is smart. “We can tweak a little bit later, but the story we want to tell is the story we get to tell.”

Bell mentions one upcoming episode that came about because of a Twitter conversation.

He was invited to Boston by Harpreet Singh, the founder and co-CEO of Experfy, a Harvard Innovation Lab-based big data consultancy, and co-founder of the Sikh Coalition, to talk about hate crimes experienced by Sikhs.

.@wkamaubell Sikh community has been impacted by hates crimes. We'd like to invite you to Boston for dialogue #UnitedShades @sikh_coalition pic.twitter.com/TuwJlz0Dtr

The interviews included many members of the Sikh community in Boston and Yuba City, Calif. It was hardly breaking news; it took six months for the segment to be complete, including fact-checking and editing. “It turns out that we made the first-ever hour of television talking about their faith, which wasn’t our plan,” says Bell. “These are just people who we don’t know but should.”

Here’s another thing that he’s thinking about as season three launches: The country is united by a lot of collective stress at the moment.

“We’re more aware of bad things when they happen,” he says, citing the immediate outcry over the killing of Stephon Clark, who was unarmed, by the Sacramento police.“That would not have been a national story even a few years ago.” While he concedes that’s some form of progress, “I do think we all have to figure out how to process these things.”

Giving back is the only way forward, he says.

“A key part of dealing with this era in America is figuring out what you can do — using your privilege or your dollars or your free time to help.” A little goes a long way. “I’m a big fan of Donor’s Choose,” a non-profit that lets people pay for supplies on wish lists posted by classroom teachers. “It’s a little thing I can do where I feel I’m being productive even when I get caught up in the malaise of life.”