Meet the Woman Behind Two Men and a Truck 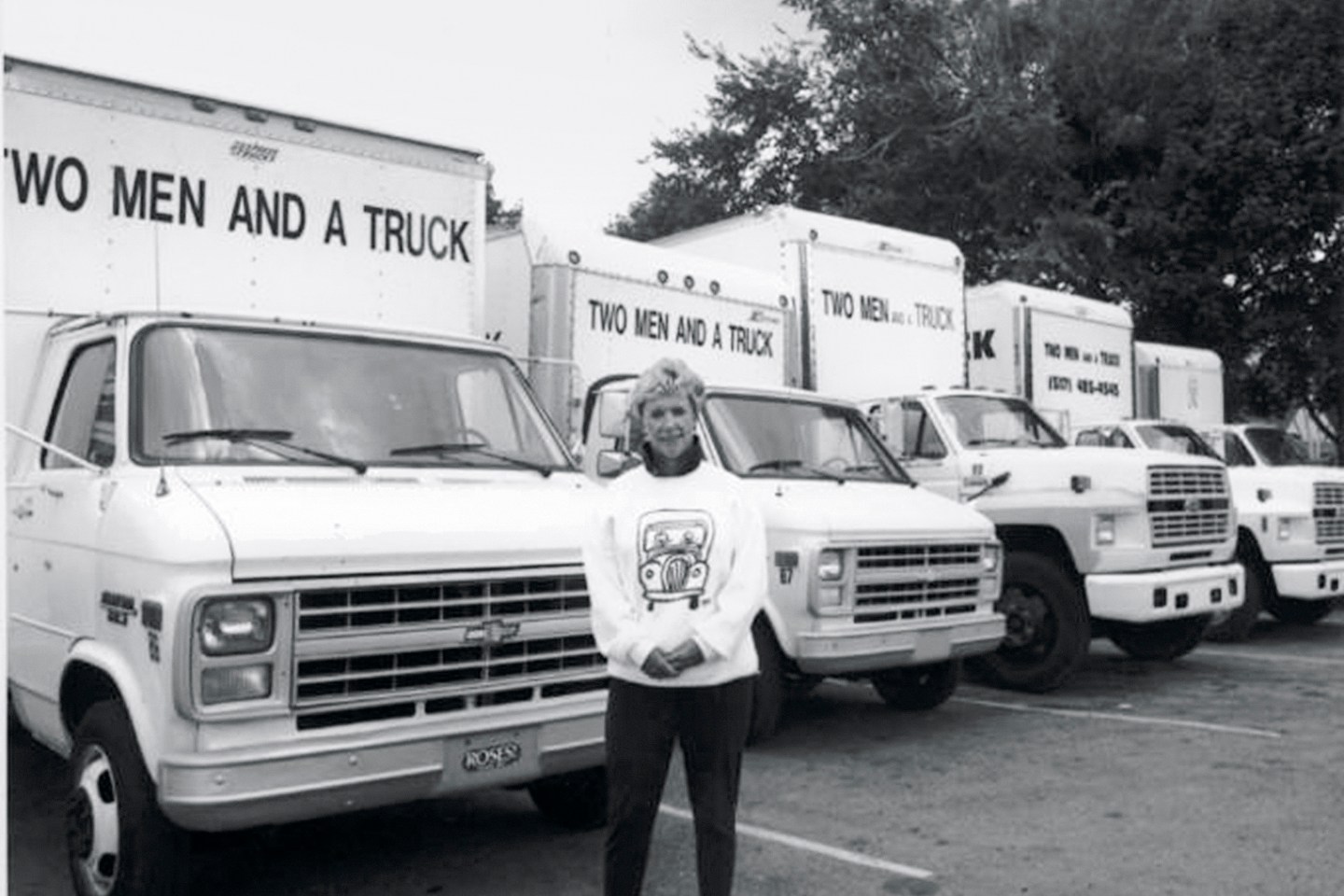 Mary Ellen Sheets stands proudly in front of the Two Men and a Truck fleet in Lansing in 1991.
COURTESY OF MARY ELLEN SHEE TS

In the mid-’80s, Mary Ellen Sheets, now 78, worked a state-government job as a systems analyst and started a small moving company in Lansing on the side. Colleagues made fun of her ambition, but when Sheets was passed up for a promotion, she left her steady paycheck, fought the competition in town, and turned Two Men and a Truck into a franchise company with locations in 40 states, Canada, the U.K., and Ireland. Last year, annual revenue was $442 million.

I never intended to go into business.

I grew up in Okemos, Mich., where my mother was a nurse and my father owned some small bus lines. Back then, women either became a nurse or a teacher.

I went to Michigan State University but I really wanted a “Mrs. degree.” So at 20, I married my high school boyfriend, had three children, and didn’t finish college.

We divorced in 1980 when my two sons, Jon and Brig, were in high school. The boys wanted to make some spending money on the weekends, and my ex-husband had left his truck behind. So we put a little ad in the local paper for Two Men and a Truck, and people started calling. We got as many as 12 calls a day.

In 1985 the boys were away at college, and I still kept getting calls, which led to this idea to start a moving company. My boys said go for it, so I hired two men named Joe and Elmer, and paid $350 for an old truck that broke down all the time.

I hadn’t ever supervised anyone before. When Joe asked if he could keep the truck at his home, I said okay. I didn’t know he didn’t have a driver’s license, and one day the police called me, saying he had been racing around Lansing.

I had to get the truck and find people to finish that job. Another time, the two men got into a fight in the cab of the truck, and a customer called me to report it. They continued working for me for a year until Joe decided to leave. I must have been nuts. They’re not the kind of movers we have today.

Marketing was simple. We had signage on the truck, which said, “Two Men and a Truck … Fast & Cheap,” which was like having a billboard. I’d make tear-off strips and put them on bulletin boards in grocery stores and laundries. A two-line ad in the local paper cost about $2 a week.

I was working for the state as a programmer during the day and set up moves at night and on the weekends. I loved owning my own business. People at the office made fun of me, saying it would never amount to anything.

I added one truck and three employees every May until we had five trucks parked in my mom’s backyard. Annual revenue grew every year. In 1989 we made $560,000.

I quit my day job and went full-time after being overlooked for a promotion. I heard somebody say, “She’ll never leave,” and I couldn’t stand it there anymore.

The big moving companies hated us. Their trucks were big, and they did moves cross-country. We did small moves, but when the economy got bad in the early ’90s, they wanted our business. The moving industry is a good-old-boys’ network, and they put up all kinds of barriers to stop me.

I didn’t know anything about moving laws, and one day the state police came and looked at our paperwork. They found seven moves done without moving licenses, so I had to go to court, and I paid a fine of $100 for seven misdemeanors. My picture was in the Lansing State Journal for being a criminal.

Back then, moving licenses were passed from father to son, and you could only get one if someone sold it to you. The big guys didn’t want us to have a license, so we incorporated as Busy Bee Movers, bought a license, then immediately transferred it to Two Men and a Truck.

The business grew, and soon we had franchises across Michigan and Florida. The first 10 franchises went to my three children, an old boyfriend, and other people I picked up along the way.

In 1994 the Republican Party asked me to run for the Michigan State Senate, so I asked my daughter, Melanie, to take over the franchising company, while Jon would run the local moving company. We had 22 employees working out of an old house with one bathroom.

I loved working with my kids, but if you had a disagreement, it was very emotional. I kept a box of Kleenex in my office, mostly for me. It was very stressful.

I decided not to run for office, but my daughter remained president when I returned to the company as an adviser. We had 30% growth annually until 2008, when the recession hit. We’re back up to 10% growth annually now.

I took a buyout in 2017 and retired. I’m really proud of building a company that creates jobs for other people and gives back to the community.

There’s definitely a glass ceiling for women. Women have to work 105% to get ahead. I don’t know if that glass ceiling will ever break. But starting my own company worked for me. I encourage other women to do the same.

Ignore doubters. A professor at a ­local college told me, “You have nothing to franchise.” An attorney told me, “You’ll need hundreds of thousands of dollars to franchise. Don’t bother.” I say, don’t be dragged down by people like that.

Make it right. The standard reimbursement for moving breakages used to be 6¢ a pound. If we broke a 10-pound ­table, we’d be liable for 60¢, but that’s not right. So we used to give an “I’m sorry” box to customers, with a coffee mug and gift certificate in it, along with fixing whatever we broke. It made a big difference.

A version of this article appears in the Dec. 15, 2017 issue of Fortune with the headline “One Woman, Two Men, and a Truck.”