Trump Hails the Signing of Deals Worth ‘Billions’ With Vietnam 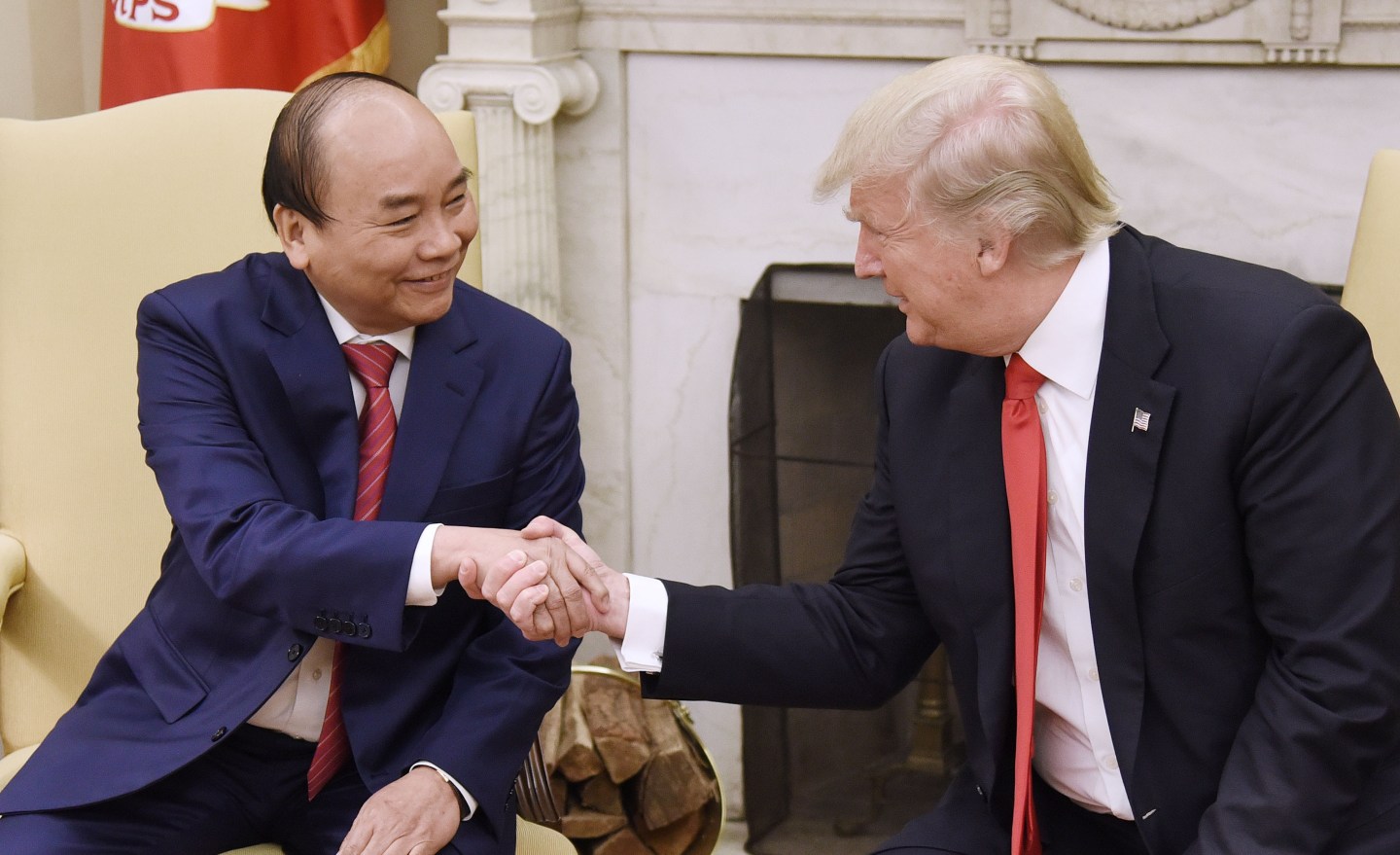 US President Donald Trump meets with Prime Minister Nguyen Xuan Phuc of Vietnam in the Oval Office of the White House, on May 31, 2017 in Washington, DC.
Olivier Douliery—Pool/Getty Images

U.S. President Donald Trump talked trade with Vietnamese Prime Minister Nguyen Xuan Phuc during a White House visit on Wednesday and welcomed the signing of business deals worth billions of dollars and the jobs they would create.

The U.S. Commerce Department announced 13 new transactions with Vietnam worth $8 billion, including $3 billion worth of U.S.-produced content that would support more than 23,000 American jobs.

These include deals for General Electric (GE) worth $5.58 billion for power generation, aircraft engines and services, its largest-ever combined sale in Vietnam.

Caterpillar (CAT) and its dealer in Vietnam also agreed to provide generator management technology for more than 100 generators in Vietnam, the company said.

“They (Vietnam) just made a very large order in the United States – and we appreciate that – for many billions of dollars, which means jobs for the United States and great, great equipment for Vietnam,” Trump told reporters at the White House.

The Commerce Department estimate of the deals was considerably less than the $15 billion figure given by Phuc during a speech at the Heritage Foundation, adding that most of the total involved the import of U.S. equipment.

Communist Vietnam has gone from being a Cold War enemy to an important partner for the United States in the Asia-Pacific, where both countries share concerns about China’s rising power.

Phuc told Trump the relationship had undergone “significant upheavals in history” but that the two countries were now “comprehensive partners.”

Phuc’s meeting with Trump makes him the first Southeast Asian leader to visit the White House under the new administration.

However, while Hanoi and Washington have stepped up security cooperation in recent years, trade has become a potential irritant, with a deficit widening steadily in Vietnam’s favor, reaching $32 billion last year, compared with $7 billion a decade earlier.

Commerce Secretary Wilbur Ross said it was important to shrink the U.S. trade deficit with Vietnam but noted that the southeast Asian country of 80 million people was the fastest-growing market for U.S. exports, rising 77% since 2014 to $4.4 billion.

“The growth of the middle class and the increasing purchasing power in Vietnam are further incentives to strengthening our long-term trade and investment relationship,” Ross said.

Trump, who has had strong words for countries with large trade surpluses with the United States, said he would be discussing trade with Phuc, as well as North Korea.

Washington has been seeking support to pressure North Korea to drop its nuclear and missile programs, which have become an increasing threat to the United States. Hanoi has said it shares concerns about North Korea.

In his Heritage speech, Phuc welcomed Trump’s plans to attend the November APEC summit in Hanoi. He called it a sign of U.S. commitment to the region and “an important occasion for the United States to assert its positive role.”

In a reference to somewhat warmer ties between Washington and Beijing under Trump, who has been courting China’s support on North Korea, Phuc said Vietnam welcomed good relations between the two powers, but hoped these would serve the interest of other nations in the region too.

He urged Washington and Beijing “to act with full transparency and in a responsible manner so as not to impact negatively the region and relations among other nations.”

“Nice, but not enough”

Murray Hiebert, a Southeast Asia expert at Washington’s Center for Strategic and International Studies, said that while the Trump administration welcomed new business deals with Vietnam, its view was they were “nice, but not enough.”

“They want Vietnam to bring some ideas about how to tackle the surplus on an ongoing basis,” he said.

On Tuesday, U.S. Trade Representative Robert Lighthizer expressed concern about the rapid growth of the deficit with Vietnam. He said it was a new challenge for the two countries and he was looking to Phuc to help address it.

The deficit is Washington’s sixth largest and reflects growing imports of Vietnamese semiconductors and other electronics products in addition to more traditional sectors such as footwear, apparel and furniture.

Phuc said the two economies were “more complementary than competitive” and said U.S. exports to Vietnam had seen a rapid rise.

For more about the Trans-Pacific Partnership, watch Fortune’s video:

Vietnam also urged the United States to remove an inspection program for catfish, speed import licenses for its fruit and make fair decisions on anti-dumping and anti-subsidy measures on Vietnamese products, the ministry said.

Vietnam was disappointed when Trump ditched the 12-nation Trans-Pacific Partnership (TPP) trade pact, of which Hanoi was expected to be one of the main beneficiaries, and focused U.S. trade policy on reducing deficits.