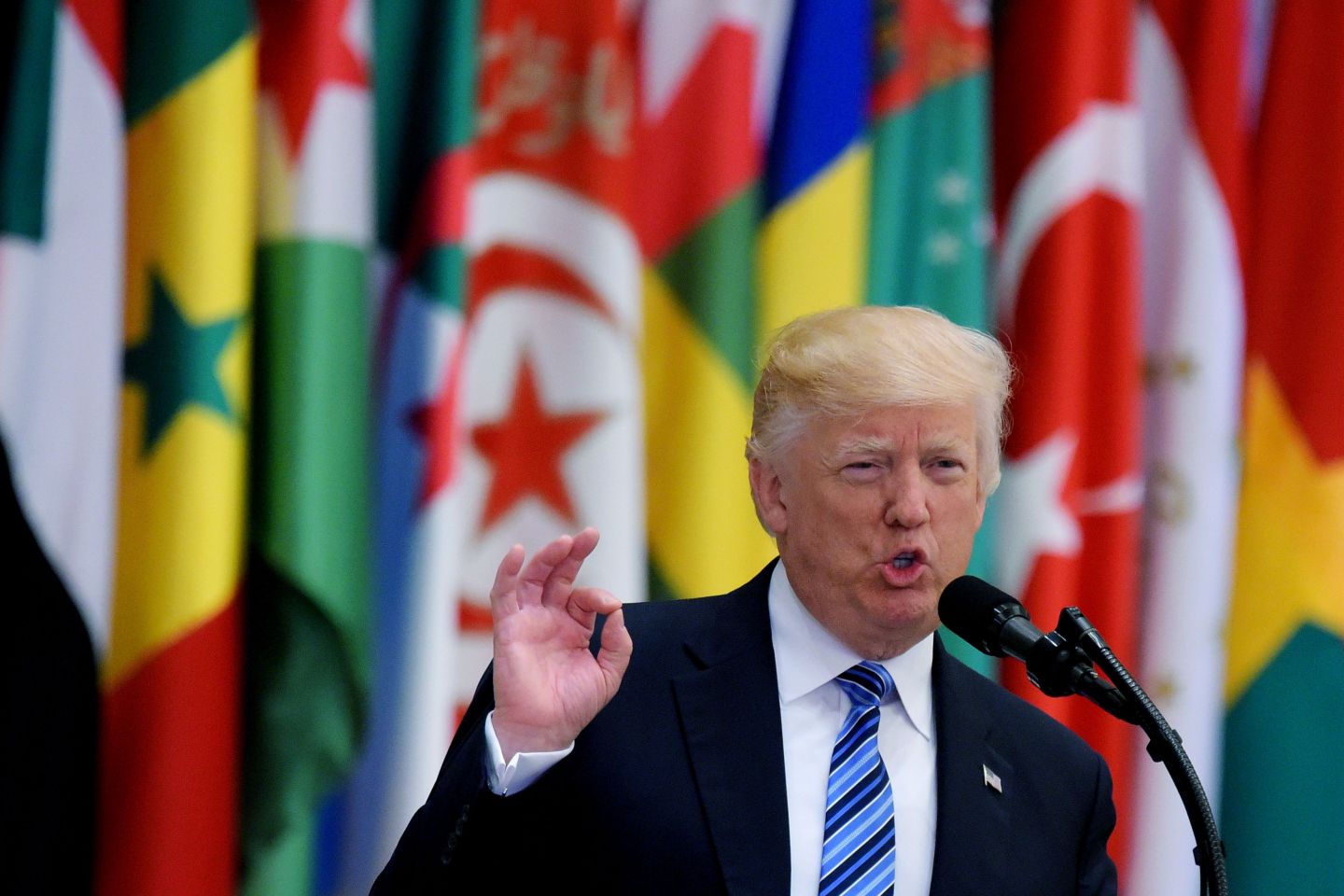 U.S. President Donald Trump called on Arab leaders to do their fair share to “drive out” terrorism from their countries on Sunday in a speech that put the burden on the region to combat militant groups.

Trump, who generated controversy with his push to ban many Muslims from entering the United States, described the fight against terrorism as a battle between good and evil rather than a clash of civilizations.

“America is prepared to stand with you in pursuit of shared interests and common security. But nations of the Middle East cannot wait for American power to crush this enemy for them,” Trump told leaders of 55 Muslim majority countries representing more than a billion people.

“The nations of the Middle East will have to decide what kind of future they want for themselves, for their countries and frankly for their families and for their children,” he said.

“It’s a choice between two futures and its a choice America cannot make for you. A better future is only possible if your nations drive out the terrorists and drive out the extremists.

Trump’s “America first” philosophy helped him win the 2016 election and has rattled allies who depend on U.S. support for their defense. The president, who is struggling to contain a brewing political scandal at home, made clear in his address that Washington would partner with the Middle East but expected more action in return.

“Terrorism has spread across the world. But the path to peace begins right here, on this ancient soil, in this sacred land,” he said in Saudi Arabia, the first stop on a nine-day tour that includes Israel, Italy and Belgium.

The speech in a gilded hall bedecked with chandeliers is part of an effort to redefine his relationship with the Muslim world after Trump frequently attacked Muslims on the campaign trail last year and tried to ban many from entering the United States.

Trump received a warm welcome from Arab leaders, who set aside his campaign rhetoric about Muslims and focused on his desire to crack down on Iran’s influence in the region, a commitment they found wanting in Obama.

Trump’s signature phrase “radical Islamic terrorism” was not included in the speech, according to excerpts released in advance by the White House.

Instead, he used the term “Islamist extremism”, which refers to Islamism as political movement rather than Islam as a religion, a distinction that he had frequently criticized the administration of his predecessor Barack Obama for making.

As a candidate, Trump proposed temporarily banning Muslims from entering the United States. In office he ordered temporary bans on people from certain Muslim-majority countries, which have been blocked by courts that ruled they were discriminatory.

Introducing Trump, Saudi King Salman described their mutual foe Iran as the source of terrorism they must confront together.

“Our responsibility before God and our people and the whole world is to stand united to fight the forces of evil and extremism wherever they are … The Iranian regime represents the tip of the spear of global terrorism.”

Iran is a Shi’ite Muslim country. The groups that the United States has been fighting in Afghanistan, Iraq and elsewhere since the September 11, 2001 attacks on Washington and New York are mostly Sunni Muslims, and enemies of Iran.

The United States and Gulf Arab countries announced agreement to coordinate efforts against the financing of terrorist groups.

Trump’s welcome in the region was put on display during a series of individual meetings with Arab leaders.

He praised Egyptian President Abdel Fattah al-Sisi, telling him, “You have done a tremendous job under trying circumstances”. The Obama administration had a difficult relationship with Sisi, who came to power after leading a military coup in 2013 during which hundreds of demonstrators were killed, and has since jailed thousands of opponents.

Trump promised to schedule a trip to Egypt soon, and he singled out the Egyptian’s choice of footwear, a pair of shiny black shoes. “Love your shoes. Boy, those shoes,” he said.

To Bahrain’s King Hamad bin Isa al-Khalifa, Trump declared that the two nations had a lot in common and “there won’t be strain with this administration.”

The king lauded the relationship and said it had led to “great stability in the region and prosperity”. Bahrain is home to the U.S. fleet in the Middle East. Its Sunni Muslim royal family rules over a majority Shi’ite population and was occasionally rebuked by the Obama administration for harsh treatment of opponents.

Trump’s Riyadh visit kicks off his first presidential trip abroad, with Saudi Arabia the first stop on a nine-day journey through the Middle East and Europe.

The speech came as Trump tried to escape the fallout from his May 9 firing of former FBI Director James Comey amid accusations he was trying to stop a federal investigation into his campaign’s ties with Russia last year.

The New York Times reported Trump called Comey a “nut job” in a meeting with Russian Foreign Minister Sergei Lavrov last week. The Washington Post said the probe had reached into the White House to include a Trump adviser, who was not named.