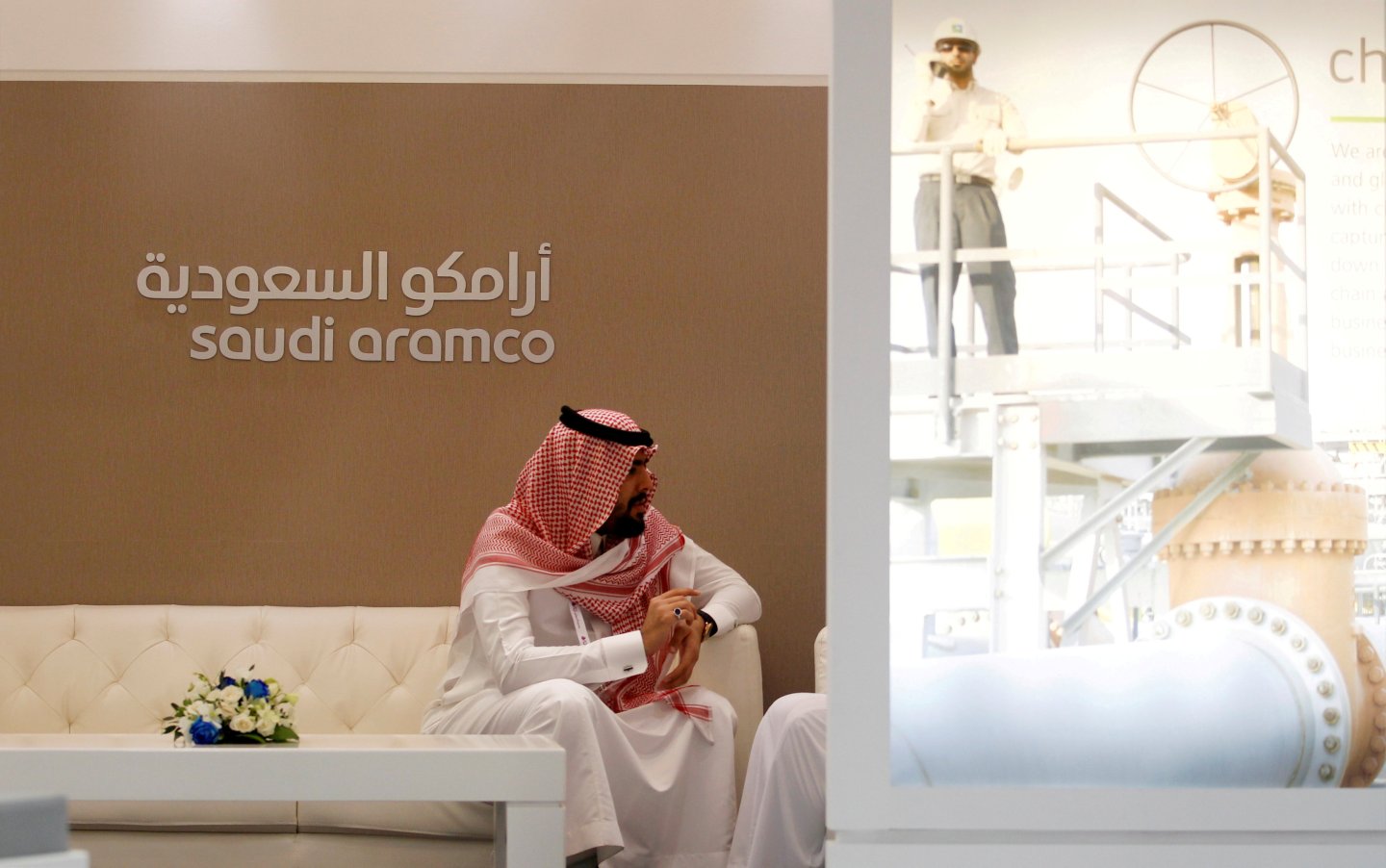 FILE PHOTO: A Saudi Aramco employee sits in the company stand at the Middle East Petrotech 2016, an exhibition and conference for the refining and petrochemical industries, in Manama, Bahrain, September 27, 2016. REUTERS/Hamad I Mohammed/File Photo
Hamad I Mohammed — Reuters

The London Stock Exchange is working on a new type of listing structure that would make it more attractive for oil giant Saudi Aramco to join the bourse, sources familiar with the discussions said.

Exchanges around the world are vying for a piece of Saudi Aramco’s initial public offering (IPO), expected to be the largest in history. The company is expected to list on the Riyadh exchange, the Tadawul, and at least one major international stock market.

The LSE is seen as one of the front-runners to win part of the IPO and has been pushing hard to land it.

LSE chief executive Xavier Rolet traveled with British Prime Minister Theresa May last month to Saudi Arabia, with the pair meeting the kingdom’s sovereign wealth fund, which is expected to be a major decision-maker in the listing process.

But none of the exchange’s current listing structures are likely to appeal to Aramco. It is working on a new model that would allow it to avoid the most onerous corporate governance requirements of a primary listing, without being seen as second class.

Such an approach could leave the British stock market open to criticism that it is changing the rules in order to attract large state-backed companies which are reluctant to meet more stringent corporate governance requirements.

Currently most companies on the LSE have a “premium listing,” which is required if they are to be included in the FTSE index. That requires firms to list at least 25% of their shares in a free float, unless regulator Financial Conduct Authority (FCA) makes an exception, and be subject to corporate governance rules which include giving minority shareholders extra voting power on issues such as independent directors.

But Saudi Aramco, which estimates its total value to be around $2 trillion, has so far indicated it wants to list no more than 5% of its shares, leaving private investors with little chance to influence the company.

The existing alternative is for Aramco to opt for a “standard listing” which has less onerous corporate governance requirements, especially in relation to the issue of controlling shareholders. Standard listings are however generally seen as less attractive to investors and have connotations of being second best.

Advisers often tell companies not to pursue this option.

Instead, sources said the LSE and the UK Listing Authority, which is part of the Financial Conduct Authority, are discussing a new category of listings for large international companies which may fail to meet the premium listing standards but is more prestigious and more appealing to investors than the “standard” category.

In a recent discussion paper, the FCA said a proposed international segment “may be attractive to companies where there is a founding family or government that wishes to retain control rights that are incompatible with a conventional premium listing.”

While the paper discussed general listing rules, sources familiar with negotiations said the new segment was being devised specifically with Aramco in mind.

They said both the LSE and government were putting pressure on the FCA to help them come up with a workable structure of this kind in order to clinch the deal.

An FCA spokesman declined to comment on an individual company’s listing arrangements but said it aimed to ensure markets functioned well:

The creation of a new listing segment comes just four years after the UK Listing Authority (UKLA), which is part of the FCA, announced new rules designed to prevent controlling shareholders from exercising undue influence over a company’s board.

Those rules were tightened in 2013 after scandals at two high-profile emerging market companies – ENRC and Bumi, both controlled by foreign tycoons – left investors nursing heavy losses.

The FCA made several changes then to protect minority investors, including introducing a requirement for companies in which one shareholder owns more than 30% to have a “relationship agreement” in place to ensure they can operate independently from that shareholder.

But there has never been a listing close to the size Aramco is proposing, and a person familiar with May and Rolet’s visit said some of the current rules may not be appropriate for Aramco.

The source characterized the approach to accommodating Aramco as “bespoke treatment.”

In a note, law firm Davis Polk questioned whether the new listing segment was targeted at only those companies with the type of features that caused the past scandals, investor outcry and tightening of the premium listing regime.

Even if it lists with the proposed new structure, there are still doubts over whether Aramco would be eligible to join the UK’s FTSE stock indices. The FTSE 100 is the most traded index of British firms in the world and inclusion would give Saudi Aramco access to passive index tracker funds as well as exposing it to more active stock pickers.

Two of the sources said benchmark inclusion was unlikely for Saudi Aramco, with one saying clients of the FTSE would complain: its huge market capital would mean it dominated the index. JP Morgan (JPM), not yet formally mandated but said by bankers to be leading negotiations on index inclusion, declined to comment.

One of the sources noted that the London Stock Exchange pitch talked about a “flexibility of the listing structure.”

“FTSE will strongly defend the integrity of the benchmark,” the source said.